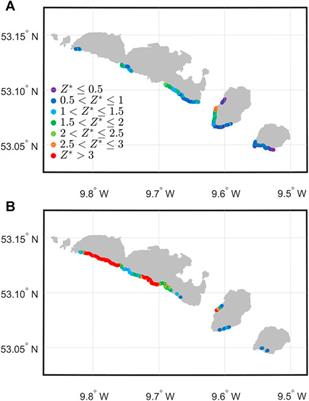 Wave-emplaced coastal boulder deposits (CBD) (Figures 1A,B) are enigmatic accumulations that occur above high tide as isolated boulders, disorganized clusters, or coast-parallel ridges (Williams and Hall, 2004; Cox et al., 2012; Bhatt et al., 2016; Lau and Autret, 2020). Debates as to whether they were formed by storm waves (Suanez et al., 2009; Etienne and Paris, 2010; Goto et al., 2011; Cox et al., 2012; Kennedy et al., 2017; Cox, 2020) or tsunamis (Nott, 2003; Scheffers et al., 2008; Paris et al., 2011; Hoffmann et al., 2020) remain open in some places, but in the case of Ireland’s Aran Islands, recent work has unequivocally shown CBD movement during storms, including transport of large boulders inland against gravity, and dislocation of megagravel weighing hundreds of tonnes (Cox et al., 2018; Cox, 2020). Controls on their occurrence, however, remain cryptic: some locations have well developed CBD, while other nearby areas have none. This study builds on work of Kennedy et al. (2021), using a dimensionless analysis that unlocks relationships between local elevations, wave climate, and CBD occurrence. We use the Aran Island deposits as a test case for this method because appropriate data is available, and activity during storms has been documented; but these techniques are broadly applicable to other locations. Determining how wave climate and topography interact to influence CBD occurrence will lead to a better understanding of coastal geomorphology. Dimensionless elevation alone does not consider boulder size, density, lithology, or other properties, simply CBD presence or absence along a coastline and how this relates to wave climate and elevation. Variations in properties not considered here will of course be important (e.g. Etienne and Paris, 2010; Hansom et al., 2008; Weiss and Sheremet, 2017, and many others), but this method steps back from the details and seeks a first-order control on the likelihood of CBD formation on a geologically homogeneous coastline.

Located off the west coast of Ireland, the Aran Islands lie across the mouth of Galway Bay (Figure 1C). Their Atlantic-facing coastlines have open ocean exposure with coastlines directly facing deep water, and their CBD are well documented (e.g., Williams and Hall, 2004; Scheffers et al., 2008; Cox et al., 2012; Cox et al., 2018). The islands are geologically homogeneous, with shallowly dipping Carboniferous limestone bedrock throughout (Williams and Hall, 2004). Coastal relief is variable, however, ranging from expansive low-lying shore platforms to sheer cliffs 90 m high. Although the islands form a NW-SE trending chain (Figure 1C), coastline shapes include long linear stretches as well as promontories and embayments. The island chain is arrayed at about 90° to the prevailing wind and wave direction (Williams and Hall, 2004), but local changes in coastal orientation mean that there is a substantial range of relative wave approach angles. On the Atlantic sides (where CBD mostly occur) the 30 m bathymetric contour ranges from about 50–900 m offshore (Figure 1C). Distributed along the ∼24 km of Atlantic-facing coastline are approximately 13 linear km of CBD (Cox et al., 2012). With their similar wave climates and geology, but varying coastline and nearshore conditions, the Aran Islands are an ideal location for studying the relationship between CBD occurrence, wave climate, and local geomorphology.

To address the interplay between offshore wave conditions, coastal geomorphology, and CBD occurrence, we integrate three datasets: presence or absence of CBD along the coast, coastal elevations, and wave climate. All data are tabulated in Supplemental Data.

Existing field measurements of CBD, and associated survey data documenting elevations at those locations (Cox et al., 2012), form the basis for this analysis. The data were collected at intervals ranging from 50–100 m along sections of the coast where CBD are present. Most of these deposits were activated and partially rearranged in winter 2013–2014, including inland transportation of many large boulders against gravity (Cox et al., 2018; Cox, 2020). To carry out a more detailed examination (at 25 m intervals) and to include those portions of the coast where CBD are absent, we used Google Earth imagery (specifically from the Centre national d’études spatiales) to fill in data gaps and extend the survey along the entire length of the Atlantic-facing sides of the islands. This resulted in a dataset of 977 locations, with georeferencing, elevation, and CBD presence or absence recorded at each site (Supplementary Table S1).

Elevation data were extracted from the Ordnance Survey Ireland digital elevation model (DEM), which included gridded elevations with 10 m horizontal resolution. For shore platforms with no CBD, elevation at the high-water mark was used as the reference datum. For CBD locations with existing data, we used high-tide referenced elevations that had been surveyed in the field by Cox et al. (2012).

One of the puzzling aspects of CBD is why they occur in some places and not in other, apparently similar, locations (Figures 2A,B). Intuitively, there must be some interplay between waves and topography that renders some locations more prone or less prone to CBD development. We calculated dimensionless elevation as a way to investigate this relationship, using coastal elevation from high tide (Z) and 100 years modeled significant wave height (Hs,100) as

By combining wave energy and topography in a single dimensionless variable, the Z* approach integrates across two primary factors of fundamental importance in coastal geomorphology and sedimentology.

The Z* quantity was introduced in Kennedy et al. (2021), where it was used to compare CBD at a wide range of sites worldwide (both storm and tsunami-related), in concert with other dimensionless quantities related to size and inland distance with the goal of determining bounding envelopes where CBD were found. The current study does not look at envelopes, but only the presence or absence of CBD along a long coastline as a function of Z*, asking whether the combination of topography and wave climate can predict whether CBD are likely to occur. As such, it represents an important test of the usefulness of this new approach. The lithologic homogeneity of the islands means that other important variables (e.g. rock density) are held constant. Boulder size varies significantly across sites (and varies with elevation: Cox et al., 2018); but that is not relevant to this analysis, which simply asks the binary question of whether CBD (in any shape or size) are likely to form.

The clear relationship between Z* and CBD occurrence suggests that interplay between elevations and wave heights is a primary controlling factor; but the very gradual trend—and large elevation range where CBD can reasonably be present or absent—suggest that it is not the only important factor. The geographic distributions of Z* values as they correspond with CBD occurrence are shown in Figures 2A,B. Locations with CBD (Figure 2A) have low values for Z* (cold colors), whereas those without CBD tend to have higher Z* (warmer colors). The co-variation is notable, and consistent (Figure 3). A simple logistic regression between CBD presence/absence and Z* gives a p-value of

, which confirms the overwhelming statistical importance of Z* on CBD occurrence at these locations.

Inishmaan hosts the highest CBD on the Aran Islands, in terms of both elevation above sea level (up to 38 m) and dimensionless elevation (Z* up to 3.1, Figures 3, 4). This contrasts with Inishmore, where—although it has cliffs of the same height and higher than those on Inishmaan—there are no CBD above 26 m elevation, or at Z*>2.09. However, other aspects also set the Inishmaan high-elevation deposits apart, including sheer cliffs that extend to the water’s edge and their location along the deep sound between Inishmaan and Inishmore with strong tidal currents (Figure 4). Thus, although dimensionless elevation is clearly important (Figure 3) it is not the sole control on CBD occurrence at higher Z*.

FIGURE 4. The western side of Inishmaan was the location of the only CBD present at Z*>2.5 on all the islands (red circles, N = 7). Bathymetry (m) and the 30 m depth contour are given as shown.

This simple study provides a substantial breakthrough in understanding the distributions of iconic Aran Islands CBD. Although a relationship between the scale of CBD and local elevation had been demonstrated for the Aran Islands (Cox et al., 2012, 2018), the pattern was noisy. The present dimensionless analysis approach provides both a more general and a clearer description of the relationship between wave forcing and CBD occurrence.

It remains to be seen whether the Z* cutoff values observed in this study are local, or whether they have more general dynamic significance. In their global compilation, Kennedy et al. (2021) found CBD at dimensionless elevations up to Z* = 3.8; but it was based on meta-analysis of published data, and therefore could not include nuances and specifics for individual places. Studies such as the present one, applying the Z* approach in a detailed way to specific CBD occurrences, will help grow our understanding of wave-coast interactions at high-energy rocky coastlines. The present study may be considered as an example of and a precursor to the kind of analyses that we hope others will carry out elsewhere.

It is important to note that, as a first-order examination of CBD dynamics, the analysis here neglects many important processes. Although clear relationships are seen here between boulder occurrence and dimensionless elevation, many other aspects remain not well understood. These include the generation of different deposit morphologies (isolated boulders, clusters, ridges), long-term accumulation and degradation of deposits, the influence of small-scale effects on CBD localization, and definitive establishment of the similarities and differences between tsunami and storm wave CBD signatures. Effects of local setting on CBD generation also remain poorly understood. The CBD research field is still young. Therefore, although this method provides new insights, detailed work on coastal boulder hydrodynamics, sedimentology, and geomorphology are required for full understanding of these complex systems. This might include investigations of nearshore wave transformation and local wave focusing, and detailed studies of the mechanisms of cliff overtopping and bore generation. Although recent work has shed some light on mechanisms of bore focusing and intensification (Bujan and Cox, 2020), our knowledge of local processes is largely limited to offshore forcing in the form of modeled wave heights. This is necessary but not sufficient to fully describe coastal boulder generation and transport.

Formation of coastal boulder deposits is complicated and poorly understood, and likely depends on factors that are still unknown. The dimensionless approach described here, however, integrating elevation and wave climate, unlocks a new level of understanding and permits comparison of locations with different conditions. It not only provides an explanation for the existence of CBD in some locations as opposed to others; it may also be used to analyze rocky coasts where CBD do not occur. This parameter should be tested at other sites to see if it yields similar results, as it may lead to a broader understanding of how waves and topography together play a role in the formation of CBD. In particular, this will allow direct comparison of CBD from widely varying areas, as part of ongoing efforts to determine whether there are simple unifying controls on these unusual deposits.

The original contributions presented in the study are included in the article/Supplementary Material. Further inquiries can be directed to the corresponding author.

The help of Frédéric Dias in providing access to climatological wave hindcasts is gratefully acknowledged.

The Supplementary Material for this article can be found online at: https://www.frontiersin.org/articles/10.3389/feart.2021.715383/full#supplementary-material