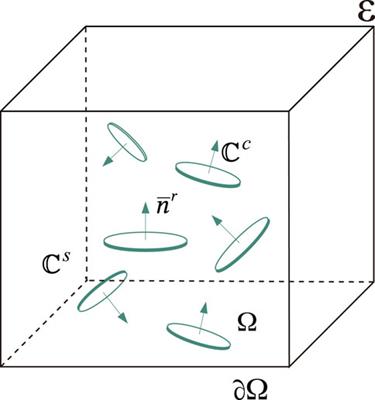 Constitutive model and simulation of the mechanical behaviors of heterogeneous rocks under general stress conditions have a great significance on the investigation of the safety and stability of rock engineering. Since host rocks in underground engineering are most often in a true triaxial stress state, researchers have conducted many true triaxial compression tests [1–7]. In 1967, [8] firstly developed an experimental apparatus that combined torsion and triaxial compression. It provided general triaxial stress states but did not produce the conditions of homogeneous triaxial stress. Then [9, 10] implemented homogeneous triaxial stress using triaxial cells. [11] used Mogi’s cell design to fabricate a cell to test larger sample sizes. After that, [4,12] did a series of experiments on different rocks using the true triaxial loading system at the University of Wisconsin. Recently, Feng et al. [13,14] designed a novel Mogi type true triaxial testing apparatus and utilized it to obtain complete stress-strain curves of many hard Rocks.

In terms of constitutive model, a number of researchers [15–18] have developed numerical models or used commercial software to study the failure processes of rocks under polyaxial stress conditions. [19] established a damage softening statistical constitutive model with the assumption that the rock micro-unit failure obeys the Weibull random distribution under the true triaxial stress state. Through linear fitting method and elastoplastic mechanical analysis, [20] built a true triaxial constitutive model of coal rock under horizontal stress loading. At present, it is very common to use the isotropic assumption in most constitutive models. However, geomaterials, such as rocks and concrete, display stress-induced anisotropy in their mechanical properties. Considering it difficult in modeling the anisotropy, few researchers have established anisotropic theoretical models with physical meaning for simulating the true triaxial stress-strain curve of rocks.

The following tensorial product notations are used throughout this paper:

In this section, a micromechanical anisotropic damage model with a non-associated plastic flow rule for brittle rocks is formulated. A representative elementary volume (REV), defined by a geometrical domain Ω and its boundary surface ∂Ω, is shown in Figure 1. The relevant REV as a matrix-inclusion system for microcracked rocks is composed of an isotropic linearly elastic matrix with a stiffness tensor

. Based on the Eshelby’s solution, microcracks with a unit normal vector of

are placed into the same family. The volume fraction of the rth family of microcracks is expressed as

is the number of microcracks per unit volume of all microcracks in the considered family and ar and cr denote the average radius and the half opening of the rth family of microcracks, respectively (see Figure 2). ζ = c/a ≪ 1 is defined as the aspect ratio of the microcracks;

is the microcrack density parameter initially introduced by [22] and widely used as an internal damage variable.

FIGURE 2. A penny-shaped microcrack and its orientation angles.

and the displacements of the upper surface

of the microcracks are designated u+ and u−, respectively. Then, the related displacement jump between the two surfaces is expressed by

are taken into consideration, i.e.,

The displacement discontinuity is characterized by two variables:

i) a scalar, β, representing the microcrack opening degree

, quantifying the relative sliding along the microcrack plane

All the microcracks in the REV are discontinuities dispersed in the solid matrix. Accordingly, the total strain of REV is decomposed into two terms: an elastic part ɛe, which is the result of the deformation of the matrix phase and an inelastic part ɛp, which is due to the existence of microcracks.

and ϱr is the weight of the rth family of microcracks.

The Mori-Tanaka scheme [24] is taken into account within the standard linear homogenization framework, and the effective stiffness tensor

has the following general form [21]:

is the stiffness tensor of the matrix phase;

is the classical Eshelby tensor, such that

being the so-called fourth-order Hill tensor. It has been proved that when microcracks are open and the aspect ratio ζ tends to zero,

has an analytical expression. In this case, the effective compliance tensor of the REV is attained by the inverse of Eq. 8 and is written in the following form:

being the compliance tensor. kn and kt are two constants expressed as

[25]. Es and νs are the Young’s modulus and the Poisson’s ratio of the matrix, respectively.

are the fourth-order orientation-dependent normal and tensor operators, which are both functions of the unit normal vector

. The specific applications of

are described in detail in literature [26].

Since microcrack propagation gives rise to the degradation of the material stiffness, it is possible to define an alternative macroscopic damage variable ωr according to the relative variation of the Young’s modulus [27,28].

. In this way, we can link the macro damage ω to the micro damage d.

Theoretical studies [29,30] have shown that

can be formulated by means of the compliance tensor

with the following expression:

Along with the previous work [21], for any opening/closure combination of the microcrack families, the free energy takes the general form

The damage criterion is a function of the thermodynamic force Fd,r associated with the internal damage variable dr, which can be derived by applying the standard differentiation of the macroscopic free energy W.

In regards to the damage evolution law, a strain energy release rate-based damage criterion is largely adopted for all microcrack families:

represents the current resistance to further damage propagation for the rth family of microcracks. It is usually assumed that the damage resistance function should be dependent on the damage level. In order to describe the strain hardening/softening of materials induced by the microcracks’ coalescence, the following power form for

where κr = dr/dc is defined as a dimensionless parameter. Physically, dc represents the critical damage values corresponding to the peak stress, and

is the maximum resistance value to the damage propagation.

When the damage criterion Eq. 15 is satisfied, the damage evolution rate is determined by using the normality rule:

with λd,r being a non-negative damage multiplier for the rth family of microcracks.

plays a critical role in describing the materials’ hardening/softening behaviors.

At the microscopic scale, the Coulomb criterion is determined by the normal and tangential components represented by

and τc of the local stress σc:

where cf is the friction coefficient of the microcracks, which is related to the asperity of microcracks’ surfaces [32].

For most brittle rocks, a large number of true triaxial tests indicated that the associated plastic flow rule was generally not suitable to describe the volumetric deformation. Therefore, we propose the following plastic potential function. To be consistent, this function is similar to the friction criterion:

where cv is termed as the current volumetric dilation coefficient. When cv = cf, the friction function is completely consistent with the potential function. At this time, the model adopts the associated plastic flow rule.

In the classical plasticity theory, the evolution rate of the local inelastic strain εp is given by the normality rule:

where λp,r is a non-negative friction multiplier for the rth family of microcracks and Dn,r is served as the plastic flow direction by a second-order tensor,

Under the loading path of conventional triaxial compression, the local friction criterion (19) for the critical plane with θ = θc which satisfies the condition

being the shear flow direction within the microcrack plane.

It is possible to define the plastic multiplier in such a way that Λp = ∫λp, then

and β can be calculated as follows:

By substituting Eq. 24 into Eq. 23, we can derive the following expression by defining

. The following relation can be derived from the damage criterion (26):

For the critical sliding plane, the friction criterion can be expressed in terms of ξ1 and ξ2:

Finally, the analytical expression of peak stress can be derived as:

On the other hand, in the volume strain-deviatoric stress curve, the volume strain will reverse with the increase of deviatoric stress, and this point is called the volume compressibility dilatancy (C/D) transition point. A series of researches [33,34] have shown that the crack damage stress σcd is defined as the volume compressibility dilatancy (C/D) transition stress. Inspired by the strength prediction, we assume that there also exists a critical damage value dcd corresponding to σcd. On the basis of Eq. 29, the following crack damage stress can be expressed as:

Inserting Eq. 27 into the above formula, the volumetric strain ϵv becomes:

The increment of volume strain is equal to 0 at the volume C/D transition point, i.e.

. At C/D transition point, d = dcd and κ = κcd, we can get the following characteristic equation:

With the above analytical analysis at hand, we here discuss the model parameters calibration procedure as follows:

• The means of Young’s modulus Es and Poisson’s ratio νs of can be determined using the linear part of the stress-strain curves.

• The friction coefficient cf can be obtained by comparing strength criterion Eq. 29 with the peak stress envelope.

• The parameter cv can be identified by solving Eq.30, 34. In this process, the intermediate variable ϖ must first be determined by comparing the peak stress envelope with the crack damage stress envelope.

can be calibrated with the analytical expression of peak stress Eq. 29 and cv.

If the associated flow rule is adopted to describe the inelastic strain of the material, there are only 5 parameters in the model. The parameters calibration method above is still available.

In this section, the proposed model is applied to modeling the mechanical behavior of Westerly granite subjected to true triaxial compression loading. Firstly conventional triaxial compression test results on Westerly granite conducted by [4] are adopted to determine the model parameters. With the parameters calibration method in Section 4, we obtained the associated/non-associated micromechanical anisotropic damage models parameters and listed as follows:

Figure 3 shows the curves of the deviator stress

amounts to the family of microcracks with the unit normal

. Then, the damage magnitude is evaluated by

. Theoretically, XY and XZ plans will coincide under conventional triaxial loading path (σ2 = σ3 = 60 MPa). This result is confirmed in Figure 4A. We can see that the growth of the damage in the plan XY is progressively blocked with the increase in σ2 from 60 to 249 MPa.

It is worth noting that our proposed model only contains six parameters, each having a clear physical meaning. Each of the parameters can be easily identified from a series of conventional triaxial tests. We will present important extensions related to the time-dependent behaviors of brittle rocks under true triaxial compression in future work.

The original contributions presented in the study are included in the article/Supplementary Material, further inquiries can be directed to the corresponding author.

This work has been jointly supported by the Natural Science Foundation of Nanjing Vocational University of Industry Technology (YK20-02-12).

11. Takahashi M, Koide H, Takahashi M. Effect of the Intermediate Principal Stress on Strength and Deformation Behavior of Sedimentary Rocks at the Depth Shallower Than 200m. In: International Symposium on Rock at Great Depth; 1989 August 28–39; PAU (1989).

The Long and Winding Road—Vestibular Efferent Anatomy in Mice

The Long and Winding Road—Vestibular Efferent Anatomy in Mice

What Prompted the Adoption of Self-Protective Behaviors in Response to COVID-19? Evidence From Women Living in the Rural Areas of Western China