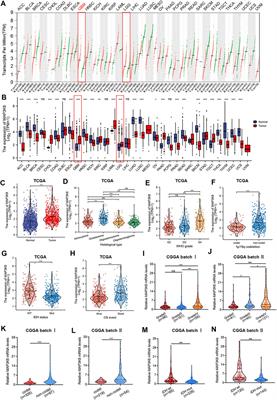 Glioma is the most prevalent and lethal primary brain tumor that typically arises from glial or precursor cells (Stupp et al., 2005; Lapointe et al., 2018; Ostrom et al., 2020). Conventional therapies such as maximal surgical resection, chemotherapy of temozolomide, and radiotherapy are considered to be the best available therapeutic approaches (Gusyatiner and Hegi, 2018; Frosina, 2021). Currently, immunotherapy has been used as a promising strategy with the ability to penetrate the blood–brain barrier. However, limited improvements in the prognosis of glioma patients have been achieved, and only a few drugs have been approved for the treatment of glioma (Norden and Wen, 2006; Korber et al., 2019). To date, there is a lack of effective treatment regimen for patients with glioma. Therefore, it is urgent to disclose the cellular and molecular mechanisms of glioma development and discover promising molecular markers for diagnosis, prognosis, and potential therapeutic target.

Here, we found that MAP3K8 was aberrantly overexpressed in glioma and correlated with poor clinicopathological features. MAP3K8 is an independent prognostic indicator and significantly correlates with the disease progression of glioma. We also performed function and pathway enrichment analysis to explore the biological function and underlying molecular mechanisms of MAP3K8 in glioma. Single-cell RNA sequencing (RNA-seq) data and immunohistochemistry (IHC) analysis showed that MAP3K8 was expressed in malignant and immune cells and mainly enriched in the microglia/macrophage cells of glioma. Biological processes such as neutrophil activation, leukocyte migration, neutrophil-mediated immunity, lymphocyte-mediated immunity, and T-cell activation were enriched. Correlation analysis of MAP3K8 with immune infiltration in glioma was performed. Meanwhile, MAP3K8 was positively correlated with several immune checkpoint molecules, chemokines, and chemokine receptors. MAP3K8 might play an essential role in tumor immunoregulation, which leads to pro-tumorigenic inflammation. In a nutshell, MAP3K8 is a prognostic biomarker and is correlated with immune response in glioma.

Glioma tissues (n = 94) were obtained from the Department of Pathology of the Affiliated Hospital of Xuzhou Medical University between 2016 and 2017. All specimens were identified by pathologists according to the 2016 World Health Organization (WHO) classification criteria. Ethical approval for this study was obtained from the Institutional Ethics Committee of Affiliated Hospital of Xuzhou Medical University (no. XYFY2018-KL056-01).

The brain tissues of mice were fixed in 4% paraformaldehyde and embedded in paraffin. IHC was performed as per standard laboratory protocols as previously described (Yu et al., 2019). In brief, paraffin blocks were sliced into 4-μm sections and the sections were deparaffinized and rehydrated via a graded series of ethanol. Antigen retrieval was autoclaved in sodium citrate buffer with high pressure for 3 min. Then, the sections were treated with 3% hydrogen peroxide and blocked with 10% goat serum. Subsequently, the sections were incubated with anti-MAP3K8 antibody (1:500 dilution; Santa Cruz, CA, United States) overnight. Thereafter, the sections were incubated with horseradish peroxidase-labeled secondary antibodies for 1 h and DAB for 2–5 min at room temperature, followed by hematoxylin staining. Photomicrographs were acquired using an Olympus microscope and scored by two pathologists using a double-blind method.

Constitution of a Risk Model

The method for constitution of a risk model was previously described (Zhang et al., 2020). Briefly, multivariate Cox proportional hazards regression analyses were performed and risk scores were constructed based on the Cox coefficients. A linear combination method was adopted to assemble the expression level and coefficient of each gene to obtain a risk score formula. The patients in the training set were stratified into a high-risk group and a low-risk group based on the median risk score.

Analysis of the Relationships Between MAP3K8, Prognosis, Diagnosis, and Clinical Phenotype

The co-expressed genes with MAP3K8 from TCGA database were screened with Pearson’s correlation coefficients (|r| > 0.4, p < 0.001). Gene Ontology (GO) and Kyoto Encyclopedia of Genes and Genomes (KEGG) analyses of MAP3K8 from TCGA database were performed on co-expressed genes with the package R “clusterProfiler.” Gene set enrichment analysis (GSEA) was performed to elucidate the significant survival difference, functions, and pathways between the MAP3K8 high- and low-expression groups using the clusterProfiler package by R (v.3.6.3). |NES| > 1, p < 0.05, and false discovery rate (FDR) < 0.25 were considered to be statistically significant.

Analysis of the Relationships Between MAP3K8 and Immunity

The web server TIMER (Tumor Immune Estimation Resource) was used to construct the immune cell score heatmap to represent the correlation between the immune cell score and MAP3K8 expression. Immunedeconv, an R package that integrates xCell algorithms, was utilized to make reliable immune infiltration estimations. We also used the R package “GSVA,” which integrates single-sample GSEA (ssGSEA) algorithms to estimate the abundance of immune cell types. For the correlation of MAP3K8 expression with immune inhibitors, chemokines, and chemokine receptors across human cancers, the Tumor and Immune System Interaction Database (TISIDB; http://cis.hku.hk/TISIDB) was used. To provide a comparison of the tumor infiltration levels between GBM and lower-grade glioma (LGG) with different somatic copy number alterations for MAP3K8, the somatic copy number alteration (SCNA) module was performed by the web server TIMER (https://cistrome.shinyapps.io/timer/).

Statistical analyses were performed on GraphPad Prism 7.0 (GraphPad Software Inc., San Diego, CA, United States) and SPSS16.0 software (SPSS 16.0; SPSS Inc., Chicago, IL, United States). Statistical data acquired from TCGA were merged and conducted by R (v.3.6.3). The correlation analysis was evaluated using chi-square (χ2) test, Pearson’s correlation, or Spearman’s correlation analysis. Survival analyses of data from the CGGA database were performed with the Kaplan–Meier method. The infiltration level for each SCNA category was compared with the normal using a two-sided Wilcoxon rank-sum test. Student’s t-test was used to determine the statistical significance of the differences between groups; the differences between more than two groups were analyzed by one-way ANOVA and the Kruskal–Wallis test. A p-value < 0.05 was considered statistically significant (*p < 0.05, **p < 0.01, ***p < 0.001, ****p < 0.0001).

The gene expression profiles across all tumor samples and paired normal tissues demonstrated that MAP3K8 was overexpressed in glioma, including GBM and LGG (Figures 1A–C). In addition, we found that the expression of MAP3K8 was obviously elevated in high-grade glioma, especially in GBM (Figures 1D, E). The IDH genotype, 1p/19q codeletion, and other molecular markers have been extensively used in the diagnosis and prognosis evaluation of glioma (Louis et al., 2016). We found that the messenger RNA (mRNA) level of MAP3K8 was enriched in the 1p/19q non-codeletion (Figure 1F) and IDH wild-type (wt) (Figure 1G) cases. Importantly, the overexpression of MAP3K8 in TCGA dataset was markedly associated with the WHO grade, IDH genotype, 1p/19q codeletion, and age (Table 1). In OS event, the MAP3K8 mRNA expression of the death group was higher than that of the live group (Figure 1H). In particular, the MAP3K8 expression with the WHO grade, IDH genotype, and 1p/19q codeletion was validated in the CGGA dataset (Figures 1I–N).

TABLE 1. Association between MAP3K8 mRNA expression and the clinical parameters of glioma patients from The Cancer Genome Atlas (TCGA)

Function and Pathway Enrichment Analysis of MAP3K8 in Glioma

Correlation Analysis of MAP3K8 With Immune Infiltration in Glioma

Correlations Between the Expression of MAP3K8 and Immune Checkpoint Molecules, Chemokines, and Chemokine Receptors

It has been reported that MAP3K8 was overexpressed in several types of cancer, including skin cancer, prostate cancer, breast cancer, squamous cell carcinoma, ovarian cancer, hepatocellular carcinoma, colorectal cancer, endometrial cancer, gastric cancer, nasopharyngeal carcinomas, anaplastic large-cell lymphoma, colitis-associated cancer, bladder cancer, and cervical cancer (Sourvinos et al., 1999; Jeong et al., 2011; Gruosso et al., 2015; Lee et al., 2015; Li et al., 2015; Pyo et al., 2018). To date, the expression, clinical significance, biological role, and underlying molecular mechanisms of MAP3K8 in glioma have not been investigated yet. Our study demonstrated that MAP3K8 was also overexpressed in GBM and LGG. In clinical pathology specimens, the protein level of MAP3K8 was elevated in glioma tissues, in contrast to para-tumor tissues. Elevated expression of MAP3K8 was also found in high-grade glioma and was significantly associated with the WHO grade. The abundance of MAP3K8 expression may be efficient for biomarker identification. We found that MAP3K8 was mainly enriched in the microglia/macrophage cells from the single-cell RNA-seq data. The top 25 genes positively associated with MAP3K8 were also mainly enriched in macrophage cells. Our results indicated that the role of MAP3K8 in macrophages might be a promising research direction in glioma.

Efficient prognostic biomarkers in patients provide important information regarding cancer aggressiveness or the clinical outcomes and influence the management and treatment decisions for a specific glioma patient (Jelski and Mroczko, 2021; Rzhevskiy et al., 2021). Currently, there is still lack of accurate and efficient diagnostic and prognostic biomarkers for glioma. Our results revealed that MAP3K8 was an independent prognostic indicator and significantly correlated with the disease progression and poor clinicopathological features of glioma. The expression and the prognostic implication of MAP3K8 were examined using online public databases (TCGA and CGGA) and validated in our clinical pathology specimens. MAP3K8 will be a promising diagnostic and prognostic biomarker that allows the natural course of a tumor to be predicted, distinguishing “good outcome” tumors from “poor outcome” tumors.

Immune checkpoint inhibitory molecules are known to mediate immune evasion and maintain the malignant behaviors of cancer cells, including self-renewal, epithelial–mesenchymal transition, metastasis, drug and radiotherapy resistance, anti-apoptosis, and angiogenesis (Pardoll, 2012; Wei et al., 2018; Zhang and Zheng, 2020). In the tumor microenvironment, different immune cell subsets are recruited via the interactions between chemokines and chemokine receptors to directly or indirectly affect tumor immunity, therapy, and patient outcomes and participate in tumor progression (Pardoll, 2012). At present, immune checkpoint molecules, chemokines, and chemokine receptors are used as new targets for cancer immunotherapy (Pardoll, 2012; Mollica Poeta et al., 2019). The expression of MAP3K8 was positively correlated with the expression of the main immune checkpoint inhibitory molecules, chemokines, and chemokine receptors. These data indicated that MAP3K8 might function as a biomarker with the potential to be an integrative or specific target of cancer immunotherapy in glioma. In view of the correlation analysis of MAP3K8 with immune infiltration, the expressions of immune checkpoint molecules, chemokines, and chemokine receptors in glioma, MAP3K8 might play an essential role in tumor immunity, and the inhibition of MPA3K8 is a plausible strategy for glioma immunotherapy.

Collectively, our study is the first to provide evidence that MAP3K8 was aberrantly overexpressed in glioma and correlated with poor clinicopathological features. MAP3K8 might serve as a valuable diagnostic and prognostic indicator. In view of the comprehensive regulatory role of MAP3K8 in tumor immunity, therapeutic regimen blocking MAP3K8 might be a promising strategy for the development of more integrative and specific cancer immunotherapy for glioma.

The raw data supporting the conclusion of this article will be made available by the authors, without undue reservation.

The studies involving human participants were reviewed and approved by Institutional Ethics Committee of Affiliated Hospital of Xuzhou Medical University. The patients/participants provided written informed consent to participate in this study.

JR designed and drafted the manuscript. JS performed the staining and scoring protocols for the human glioma tissues. HC, JR, YX, JL, SW, and RZ conducted the data analysis. All authors contributed to the article and approved the submitted version.

The Supplementary Material for this article can be found online at: https://www.frontiersin.org/articles/10.3389/fmolb.2021.779290/full#supplementary-material.