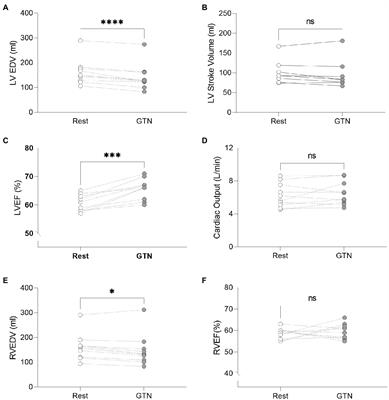 The heart has an extremely high turnover of energy, requiring around 6 kg of adenosine triphosphate (ATP) per day in order to perform contraction and relaxation. As ATP production is reduced in heart failure (Neubauer, 2007), many current treatments are aimed at lowering myocardial energy use by decreasing cardiac work.

Glyceryl trinitrate (GTN) is one such drug that has been used for nearly 150 years to treat cardiovascular disease. Nitrates predominantly dilate systemic veins, increasing the capacitance of these vessels and reducing venous return to the heart, thereby lowering ventricular filling and preload. GTN achieves this via activation of cGMP-dependent protein kinase, without donating significant amounts of the free radical nitric oxide (Kleschyov et al., 2003). At higher doses, they have effects on arterial tone, lowering systemic vascular resistance, and therefore afterload. In acute heart failure, this is therapeutic, with the reduction in preload reducing pulmonary venous congestion and the reduction in afterload reducing cardiac work.

However, despite these beneficial hemodynamic effects in fluid overloaded heart failure, studies in healthy, euvolemic humans have showed that intravenous nitrate increased myocardial oxygen usage despite cardiac work being the same, or reduced (Brachfeld et al., 1959). This implies more ATP is being used to sustain the same or less cardiac work and as such that cardiac efficiency is lower. In addition to this, it is reported in animal models that GTN causes nitric oxide-induced inhibition of complex IV of the electron transport chain, resulting in inhibition of mitochondrial ATP production by oxidative phosphorylation (Somani et al., 1969; Brown and Cooper, 1994). When considering the two effects, GTN may result in energetic stress with reduced ATP production in the face of increased demand if the patient is initially euvolemic and the GTN causes a reduction in preload which compromises myocardial stretch necessary for the optimal operation of the Frank-Starling relationship. This has not been investigated in humans to date but would provide valuable insight into the effects of this well-established medication.

As a result, we used the combination of cardiac magnetic resonance imaging (MRI) and phosphorus magnetic resonance spectroscopy to record cardiac function and energy metabolism in healthy volunteers before and during GTN infusion.

The study was approved by the University of Oxford Medical Sciences Interdivisional Research Ethics Committee (reference R64397/RE001) and was in accordance with the Declaration of Helsinki. 10 healthy volunteers were recruited via word of mouth, emails to departmental mailing lists, social media postings, and posters located in University Departments. Participant characteristics are in Table 1.

Exclusion criteria were as follows: any history of cardiac disease (including valvular heart disease, myocardial impairment, or coronary artery disease), any history of metabolic disorder (defined as a history of diabetes mellitus, hypothyroidism, or anemia), any contra-indications to nitrate-based medications, any contra-indication to MRI scanning, or involvement in any other research projects where the procedures may affect the outcomes of the study.

All scans were performed at 3.0 Tesla (Siemens Healthineers, Erlangen, Germany), before and during GTN infusion.

1 mg/ml GTN infusion was started at a rate of 3 ml/Hr and titrated at 5-min intervals with a target of a 15 mmHg fall in mean arterial pressure (but not to lower it below 70 mmHg) and then maintained during scanning.

Statistical analysis was performed using GraphPad Prism (GraphPad software, United States). All data were subjected to Kolmogorov-Smirnov tests to establish normal distribution and are presented as mean ± standard deviation. Paired-equal variance Student’s t-tests were performed for pre and during infusion data sets. Correlations were assessed with Pearson’s correlation analysis. A probability of p < 0.05 was considered significant.

GTN infusion caused a reduction in left (by 20 ml, p < 0.001) and right (by 13 mls, p = 0.01) ventricular end-diastolic volume and right atrial area (by 3 cm2 p = 0.04, Table 2; Figure 1). While cardiac pressures were not measured directly, these reductions in chamber size were in line with GTN-induced vasodilatation and preload reduction. Mean arterial pressure fell by an average of 13 mmHg (p < 0.05), in line with its additional known effects on afterload.

Table 2. Left and right heart measurements at rest and during GTN infusion.

In contrast, both heart rate (by 9 beats per minutes) and left ventricular ejection fraction (by 5%, both p < 0.001) were increased during GTN. This resulted in maintenance of cardiac output and cardiac index which were unchanged (p = 0.37 and 0.40, respectively).

Table 3. Hemodynamic values at rest and during GTN infusion (values averaged over 5 min).

Overall, this is in keeping with the known effects of GTN and shows that while heart rate and left ventricular ejection fraction rose to maintain cardiac output, mechanical or external cardiac work was lower during GTN.

Two out of the 10 participants spectra for creatine kinase rate constant calculations had values of >1 for standard deviation of uncertainty of fit and were hence discarded.

Prior to the administration of GTN, and as expected, there was a positive correlation between CK rate constant and rate pressure product (R2 = 0.56, p = 0.03, Figure 4A), as well as a trend toward a positive correlation between CK flux and rate pressure product (R2 = 0.4, p = 0.09). There was also a strong positive correlation between the resting PCr/ATP value and the change in stroke volume during GTN (R2 = 0.66, p = 0.004, Figure 4B), where lower resting PCr/ATP levels were positively correlated with the largest drop in stroke volume, with higher resting PCr/ATP being associated with increased stroke volume during GTN. This relationship was similar to that seen with the change in CK forward rate constant during GTN, (R2 = 0.578, p = 0.028, Figure 4C), where again the smallest increase was related to the largest falls in stroke volume and the largest increases to increased stroke volume.

GTN is one of the most commonly used cardiovascular drugs. In this study, we have used in vivo 31P magnetic resonance spectroscopy to assess human ATP kinetics during GTN infusion. We have shown that despite its hemodynamic effect of reducing mean arterial pressure and cardiac work, ATP delivery through CK is increased; however, GTN simultaneously inhibits the rate of ATP production from mitochondrial oxidative phosphorylation.

Effects of GTN Infusions on Cardiac Function and Hemodynamics

In this study, GTN infusion resulted in a reduced mean arterial pressure and increased heart rate and left ventricular ejection fraction. The fall in left and right ventricular end-diastolic volume and right atrial size are likely to reflect a fall in preload caused by the venoparesis. The observed increased in contractility (here seen as increased left ventricular ejection fraction) and heart rate reflect the known baroreceptor reflex response to reduced preload and reduced aortic stretch during GTN that compensates for the fall in preload and afterload to preserve cardiac output (which was unchanged in this experiment) and maintain tissue perfusion. Overall, however, despite this unchanged cardiac output, left ventricular stroke work was reduced.

The Effects of GTN Infusion on Myocardial High-Energy Phosphate Metabolism

Although it might be expected that as cardiac output was maintained, and many calculated indices of cardiac work (rate pressure product, stroke work, and cardiac work) fell or remained constant during GTN, that ATP delivery would also remain similar or reduced, this was not the case.

Despite maintained cardiac output, and reduced stroke work during GTN, there was a significant increase in both the creatine kinase forward rate constant and creatine kinase flux. This would suggest that ATP delivery through creatine kinase was increased significantly. While this is unexpected as ATP usage and cardiac work are tightly coupled, it does however provide an explanation for the previous human studies showing global myocardial oxygen use is increased during GTN infusion (Brachfeld et al., 1959; indeed the average observed increase in myocardial oxygen consumption in this study of 51% closely matches our average observed CK flux increase of 45%). CK had been previously shown to be inhibited in rat hearts by a NO donor (Gross et al., 1996); however, GTN may not donate NO in significant quantities (Kleschyov et al., 2003), explaining the disparity here. In addition, the loss of the relationship between CK activity and rate pressure product during GTN infusion would suggest a decoupling of ATP delivery and cardiac work. The mechanism behind this observation remains elusive.

During GTN infusion, we have showed that the myocardial PCr/ATP ratio is reduced. This is a surprising finding, as the PCr/ATP in the normal heart is reported almost universally to be maintained during all but extreme inotropic stress (Pluim et al., 1998; Rayner et al., 2021). This suggests during GTN infusion that oxidative phosphorylation is being impaired and that ATP use is greater than the rate of ATP production, with phosphocreatine pool depletion occurring to maintain ATP levels.

One explanation may lie in the fact that GTN has been shown to cause nitric oxide-induced inhibition of complex IV of the respiratory chain (Brown and Cooper, 1994) and with it impaired oxidative phosphorylation in isolated mitochondria (Boime and Edmund, 1971). This also explains the reduction in oxygen uptake seen in isolated myocytes (Somani et al., 1969; Gross and Hardman, 1975).

By using 31P magnetic resonance spectroscopy to measure both ATP delivery and PCr/ATP, this study can also reconcile the apparently contradictory findings that in the intact human heart MVO2 is elevated, but in the isolated cell it is reduced. Although total ATP demand, and as such oxygen demand is increased by GTN (in this study seen as increased CK flux), mitochondrial oxidative phosphorylation is impaired by GTN (seen as a failure to maintain PCr/ATP levels).

In this study, rate pressure product and other non-invasive derived measures have been used as a surrogate (Nelson et al., 1974) for myocardial work and oxygen consumption. However, this discounts work done by the right ventricle, substitutes pressure for wall tension stress, and discounts “internal” cardiac work used to facilitate diastole and essential cellular ATPases.

While the creatine kinase shuttle is thought to be the main transfer mechanism involved in transferring ATP from the mitochondrion to the myofibril, using the rapid diffusion capability of phosphocreatine to transfer a phosphate group into ATP at the myofibril, there are several other mechanisms that can shuttle ATP, including simple diffusion, which are not measured here. However, as they only present ~15% of ATP transfer (Peterzan et al., 2017) we feel this remains reflective of the major biological pathways.

This study is the first study to use 31P magnetic resonance spectroscopy to assess ATP kinetics during GTN infusion in humans. We have shown that despite its hemodynamic effect to reduce mean arterial pressure and cardiac work, ATP delivery through CK is increased by GTN, while simultaneously the capacity to increase rate of ATP production from mitochondrial oxidative phosphorylation in response to increased demand is reduced by GTN. Using 31P in this way has allowed a greater understanding of the actions of this commonly prescribed medication.

The studies involving human participants were reviewed and approved by University of Oxford Medical Sciences Interdivisional Research Ethics Committee (reference R64397/RE001). The patients/participants provided their written informed consent to participate in this study.

WW conceived the research and developed it with help from the other authors. WW and PG performed the experiments. LV developed the MRS sequences and assisted in analysis. OR, NH, and SN aided in drafting the manuscript. All authors contributed to the article and approved the submitted version.

LV acknowledges the support of the Slovak Grant Agencies VEGA (2/0003/20) and APVV (#19–0032). NH, SN, and OR acknowledge support from the BHF Centre of Research Excellence (RE/08/004), Oxford and the Oxford National Institute for Health Research (NIHR) Biomedical Research Centre.