Twenty-Year Trends of Low Birth Weight in Japan: A Joinpoint Regression Analysis of Data From 2000 to 2019 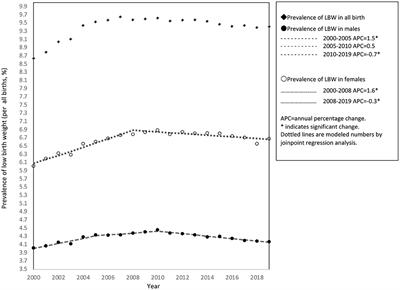 Low birth weight (LBW), defined as a birth weight <2,500 g, is a major public health concern worldwide. Globally, in 2015, 20.5 million infants with LBW were born, accounting for 14.6% of all births, according to data compiled by United Nations International Children’s Emergency Fund (1). According to the World Health Organization, the proportion of infants with LBW offers an indicator of multifaceted public health problems, including long-term maternal malnutrition, ill-health, and poor healthcare in pregnancy (2). In addition, the Developmental Origins of Health and Disease theory states that in addition to neonatal mortality and morbidity, LBW is associated with long-term health conditions such as cardiovascular disease, type II diabetes, and hypertension (3). To manage maternal and child health efficiently at the population level, careful observation of LBW is necessary.

In 2019, 9.4% of babies born in Japan were LBW (4), higher than the 2018 average among Organisation for Economic Co-operation and Development (OECD) countries of 6.6% (5). For example, 2019 prevalences were 6.8% in the United Kingdom, 8.3% in the United States, and 6.6% in South Korea (5). Japan has one of the highest prevalences of LBW, accounting for about 9–10% of births in recent decade. Many developed countries have shown increases in the prevalence of LBW since 2000, most particularly Southern European countries such as Greece 9.9% (2019), Portugal 8.9% (2019), and Spain 7.5% (2019). However, in Japan, the LBW situation differs from that observed in such countries. Population-based Japanese vital statistics data show that the rate of neonates with LBW has almost doubled from 5.1% in 1975 to 9.5% in 2005 (4). Over the past three decades, the rate of increase in LBW has appeared more rapid in Japan than in many developed countries.

Although early gestational age (6) and multiple births (7) are known risk factors for LBW, previous studies and reports on LBW in Japan have shown trends in the prevalence of all LBW without accounting for the effects of gestational age or multiple births (8, 9). However, half of Japanese cases of LBW fall into the category of singleton, full-term births (8). Little scientific evidence has thus been accumulated regarding trends in Japanese LBW among full-term births. LBW is considered a persistent and severe issue over the long term in Japan. Accordingly, observation of the trends and discussion of potential approaches to preventing LBW in Japanese infants after excluding preterm and multiple births is meaningful.

The present study aimed to observe the 20 year trend between 2000 and 2019 in the prevalence of LBW in singleton, full-term births in Japan and conduct joinpoint regression to analyze trends in detail. It is hoped that this study will provide new insights that will prove useful for maternal and child health.

This study was a retrospective, nationwide, population-based, observational study of vital statistics published by the Japanese government (4). Secondary analysis was performed based on governmental statistical data from 2000 to 2019, to observe long-term trends in the prevalence of LBW.

The number of births and LBW newborns by gestational age and sex were obtained from annual vital statistics population data collected by the Ministry of Health, Labor and Welfare based on birth certificates. The dataset used in this study showed only the annual number of births according to gestational age, sex, and birth weight, and did not include information on individuals. In Japan, birth certificates are issued by obstetricians and midwives in hospitals and clinics at the time of delivery, and these data are reported to the mayor of the municipality. The birth certificate contains information such as sex, birth weight, gestational age multiple pregnancies, ages of the father and mother, and place of birth. These data are electronically registered and systematized by the municipality as vital statistics data.

Trends in the prevalence of LBW from 2000 to 2019 were analyzed using joinpoint regression analysis. This method connects several different line segments, thus allowing for succinct characterization of changes in a trend over time (10). The Joinpoint Regression Program version 4.6.0.0 software was provided by the Surveillance Research Program of the National Cancer Institute. Tests for fit in a maximum of four joinpoints (11). In this study, joinpoint regression analysis was used to identify years (as the independent variable) in which significant changes in prevalence rate occurred over the study period, and amount of change as the annual percentage change in rate per year. We allowed up to four joinpoints and identified any difference from no change in each segment, with values of p < 0.05 considered statistically significant. Stata for Mac version 15 (Stata Corp, College Station, Texas, USA) was used for all other statistical analyses.

The Ethics Committee for Human Subjects Research at Shokei Gakuin University waived the requirement for ethical approval based on the use of published, public-domain data.

Table 1. Birth rate data for all births and low birth weight (LBW) in singleton births in Japan from 2000 to 2019.

Figure 1. Trends in the prevalence of low birth weight in singleton, full-term births by sex in Japan, 2000–2019.

Several factor may have contributed to the change in Japanese LBW trends from upward to downward at around 2010. Taken overall, we consider that environmental (including potential consequences of treatment and public health strategies), dietary, and socioeconomic factors are likely to have affected these trends. An ecological study by Erasan et al. reported that factors influencing increasing LBW prevalence in OECD countries between 2000 and 2015 were healthcare coverage, public health system coverage, such as hospitals per million inhabitants, and ratios of healthcare workers, midwives per 1,000 inhabitants (14). Erasan et al. also pointed out an association between some economic and health care system organization and funding and the LBW rate. The discussion of LBW needs to include not only maternal factors, but also environmental factors. Among these, further in-depth analysis is necessary to elucidate the impact of changes to guidelines in 2006 regarding gestational weight gain for pregnant women on both LBW trends and the prevalence of underweight women of reproductive age (12, 15). In addition, careful monitoring of trends in LBW among women with preterm and multiple births is needed to clarify overall Japanese trends in LBW according to strata for gestational age and multiple births. Differences in these trends between singleton, multiple, preterm, and full-term births will provide essential insights to inform public health strategies and thus enable more effective prevention of LBW.

The present study showed several limitations that need to be considered when interpreting the results. First, as we used governmental reports that provided only annual aggregated statistics for sex, gestational age, and birth weight, there was no source of individual-level data. In addition, in contrast to similar previous studies, we could report only crude data regarding the prevalence of LBW, without adjusting for maternal age (16), pre-pregnancy body mass index (17), smoking rate during pregnancy (18), and socioeconomic factors (19), as we were lacking this information.

Publicly available datasets were analyzed in this study. This data can be found here: https://figshare.com/s/444100c4a0f23b01aac3.

Material preparation, data collection, and analysis were performed by TM. The first draft of the manuscript was written by TM. All authors contributed to the study conception and design, commented on previous versions of the manuscript, and have read and approved the final version of the manuscript.

This work was supported by a JSPS KAKENHI grant (No. 19K19440) from the Ministry of Education, Culture, Sports, Science and Technology, Japan.