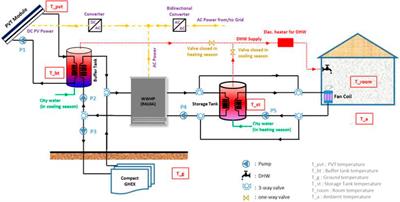 The 21st Conference of Parties (COP 21) was held to reduce greenhouse gas emission for global warming and climate changes (UNFCCC, 2015). The Korean government announced energy policies to reduce greenhouse gases emissions by 37% by 2030, a 20% electricity implementation with renewable energy by 2030, and introduced zero-energy building obligation for public building from 2020 and for private building from 2025 (Korea Ministry of Land, 2019; Kim et al., 2020a; Kim and Yu, 2020). To reach these goals in Korea, a variety of renewable technologies need to be introduced and employed. The future building energy technologies are expected to replace the conventional fossil fuel with clean and renewable options, such as decentralized microgeneration technologies. The developed hybrid solar geothermal technology is an attempt to respond to these major changes in Korean and other international government energy policies. Relatedly, the zero-energy building with the hybrid solar–geothermal heat pump system will accelerate the adoption of hybrid renewable technologies to meet the national renewable energy policy targets.

Photovoltaic–thermal (PVT) is one of these technologies that are able to generate electricity and heat simultaneously. The PVT electricity could be used on-site or exported to the grid. Meanwhile, the PVT energy could be utilized for space and water heating. The PVT research started in the 1970s with a primary aim to increase PV panel power generation by fluid flow cooling. PVT has the advantage of generating not only power but hot water as well, thus, reducing building energy consumption. The Web, Direct, and Spiral are three different types of PVT water collector performance studied based on the ISO 9806 test method that was presented. Under 800 W/ m2 radiation conditions, the maximum thermal and electric performance were indicated, respectively, as 53.5% and 12.4% for Web type, 53.6% and 12.7% for Direct type, and 53.4% and 13.8% for Spiral type (Fudholi et al., 2013). The v-shaped rib effect on solar air collector performance by different rib geometries, pitch and angle to enhance average Nusselt number, and thermal–hydraulic performance that indicated 26% and 18%, respectively (Jin et al., 2017) was studied. The PV surface temperature characteristics with a 50-kW PV system experiment were studied. It was found that annual PV system electricity generation increased by 1% when the temperature characteristic was improved by 0.1%/°C (Khelifa et al., 2015). A comparison of PV and PVT twin system tests for the investigation of PV cell temperature characteristic effect on electricity production (Tina et al., 2015) was studied. A comparison of the PVT water heating system experiment and TRNSYS simulation, which indicated 12.04% and 5.29% error for thermal and electrical energy, respectively (Gagliano et al., 2019), was studied. A numerical PVT model with −30°, 0°, and +30° three different baffle slope angles. The study results were analyzed by the ratio of inlet–outlet temperature and pressure drop that indicated 0.007°C/Pa, 0.005°C/Pa, and 0.006 °C/Pa for −30°, 0°, and + 30°baffle slope angle, respectively (Kim et al., 2020b).

In this paper, a hybrid solar–geothermal heat pump polygeneration system was designed and modeled in TRNSYS and demonstrated in a building located in Cheongju, Korea. The justification of the polygeneration WWHP system has been conducted by comparing the lab WWHP COPc data based on ISO 13526 with the actual demonstration site WWHP COPc data. The verification of the polygeneration system was conducted by comparing the TRNSYS model results with the demonstration site WWHP load and system power consumption data. Finally, the impact of the source temperature on WWHP COPc and the impact of ambient temperature on system energy consumption will be also evaluated in this study. The output of this study could be needed to design and confirm a WWHP cooling system performance based on the WWHP lab performance data and actual demonstration site data. The future perspectives of the study include the contribution of a new carbon-free HVAC system for buildings and communities with this hybrid solar–geothermal heat pump polygeneration system. Therefore, this study could suggest and guide the future direction of a smart controlled carbon-free hybrid solar and geothermal heat pump system design and commission based on the ISO 13256 method WWHP lab performance data and the practical demonstration site performance data.

Heat pump is a key component of the hybrid solar–geothermal polygeneration system for the heating and cooling of the building. Therefore, the ISO 13256-based heat pump performance lab data are very important for justification of the demonstration system whether it is properly designed and installed or not. In this paper, a lab test facility was designed and installed based on ISO 13256 (KS 8292) shown in Figure 4. Two of the 25-kW cooling units and 30-kW heater were used to satisfy evaporator conditions, and the 90-kW heating unit was used to satisfy the condenser condition for the heating and cooling performance test. Table 4 shows the 5 RT (17.5 kW) WWHP component and the performance lab tests conducted at various temperature condition cases such as in Table 5 (ISO 13256, 2017). The lab test facility is equipped with pressure and temperature sensors for monitoring and recording the performance data in heating and cooling. The heat pump cooling performance factor COP could be calculated by measuring the heat pump thermal load and the compressor work power as per Eqs 1 and 2 (ISO 13256, 2017).

In this paper, a hybrid solar geothermal heat pump polygeneration system was designed and modeled in TRNSYS and demonstrated in a building located in Cheongju, Korea. The justifications of polygeneration are as follows:

1. A hybrid solar–geothermal heat pump polygeneration was designed and demonstrated in a factory building (176 m2 floor area) in Cheongju, Korea. The building heating and cooling load are 13.8 kW for heating at −11.9°C ambient temperature and 10.6 kW for cooling at 32.3 C ambient temperature, respectively.

2. ISO 13256-based WWHP lab performance data showed a COPc of 9.9, and the site demonstration data showed a COPc of 10.3 representing a 4.3% relative error and indicating that the demonstration COP was higher than the lab COP due to higher heat rejection at the same source temperature. As result for the COPc impact, the WWHP source temperature was decreased by 4.0°C from 20.9°C to 16.9°C by utilizing the GHXs, which increased COPc by 13% from COPc 8.5 to 9.8.

In the future, more COPh impact studies will be conducted during the upcoming cooling and heating seasons.

This research was funded by the Korea Institute of Energy Technology Evaluation and Planning (KETEP) and the Ministry of Trade, Industry and Energy (MOTIE) of the Republic of Korea, grant number 20188550000430.

Author Anonymous, (2015). The Standard of Energy Saving in a Building, the Ministry of Land, Infrastructure and Transport, 1108.