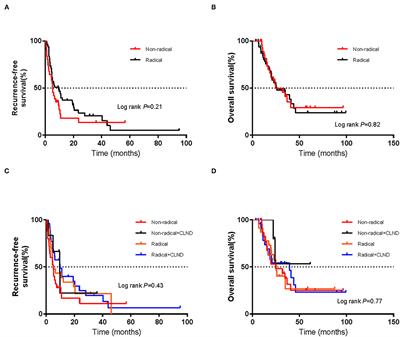 We retrospectively analysed clinical data of post-operative patients with primary lower genital tract melanoma hospitalised at Peking University Cancer Hospital between Jan 2014 and Dec 2020. Patients were included based on the following criteria: (1) pathological confirmation of primary lower genital tract mucosal melanoma at Peking University Cancer Hospital; (2) treatment with non-radical resection or radical resection to fully remove the tumour and no neoadjuvant chemotherapy; and (3) a follow-up time of more than half a year. Non-radical resection included local tumour excision, wide tumour excision, and partial vaginectomy with or without complete lymph node dissection (CLND); radical resection included radical vaginectomy, radical hysterectomy with or without radical parametrectomy, and with or without CLND. CLND included pelvic node dissection, aortic node dissection, and unilateral or bilateral inguinal lymph node dissection. The exclusion criteria were as follows: (1) treatment with debulking dissection that had only partially removed the tumour; (2) type of surgery unknown; (3) surgery recorded unknown; (4) coexistence of any other primary tumour; and (5) distant metastasis at diagnosis.

A total of 80 patients were included in this study. The patients were divided into the non-radical resection group and the radical resection group based on the operation performed. The following clinical data were collected: patient demographic data (including age, genetic mutation status, lymph node status, etc.), histopathology of the tumour (including the primary site, infiltration depth, ulceration, etc.), treatment, and outcomes. Because the cancer staging criteria for cutaneous melanoma in the American Joint Committee on Cancer (AJCC) staging manual are not recommended for mucosal melanoma (8), we collected the infiltration depth of the tumour, the status of the ulceration, and the status of lymph nodes to describe tumour burden.

Differences in continuous variables, such as age, were examined by t-tests. Differences in categorical variables were examined by the chi-square test or Fisher’s exact test, if appropriate. RFS and OS curves were plotted using the Kaplan–Meier method and compared between groups using the log-rank test. Furthermore, univariate and multivariate Cox proportional hazards regression models were used to identify the factors associated with RFS and OS and to calculate hazard ratios (HRs) and associated 95% confidence intervals (95% CIs). Subgroup analyses according to baseline clinical characteristics were performed to compare the effectiveness of non-radical resection and radical resection with respect to RFS in different subgroups through the univariate Cox regression model. All analyses were performed with SPSS, version 23 (IBM Corp., Armonk, NY), and GraphPad PRISM, version 6 (GraphPad Software, LLC). All tests were two-sided, with P-values < 0.05 considered statistically significant.

Figure 2. Kaplan–Meier curves of (A) recurrence-free survival and (B) overall survival of patients in the radical resection group who did or did not undergo complete lymph node dissection (CLND). The log-rank test was used to evaluate differences between groups.

RFS and OS According to the Primary Site

Figure 3. Kaplan–Meier curves of (A) recurrence-free survival and (B) overall survival of patients with vaginal melanoma in the non-radical resection and radical resection groups. The log-rank test was used to evaluate differences between groups.

RFS and OS According to Medical Management

Figure 5. Kaplan–Meier curves of (A) recurrence-free survival and (B) overall survival in patients receiving or not receiving post-operative therapy. The log-rank test was used to evaluate differences between groups.

Univariate Cox regression analyses conducted using the abovementioned method showed that the infiltration depth of the tumour and post-operative adjuvant therapy also were correlated with OS (Table 2), and the HR for the radical resection group compared with the non-radical resection group was 1.07 (95% CI 0.58–1.97, P > 0.05). The multivariate Cox proportional hazards models showed that post-operative adjuvant therapy was an independent risk factor for OS, and the type of operation was not associated with OS (P = 0.77). Univariate Cox regression analyses did not reveal any between-group differences in RFS in subgroups stratified by baseline characteristics (P > 0.05, Figure 6).

In our study, by constructing multivariate Cox proportional hazards models, we found that surgical approach was an independent risk factor for RFS but not OS (Table 2). Given the rarity of gynaecological melanoma, few studies have assessed the effectiveness of different surgical procedures. For cutaneous melanoma, wide tumour excision with a 2-centimetre margin is recommended (11–13). However, most mucosal melanomas are not suitable for wide tumour excision. There is a lack of consensus regarding the benefits of radical resection. Some studies have suggested that there is no benefit to more radical surgical approaches, as they do not improve patient survival. In one study of 22 patients, half of the patients underwent radical surgery, and the other half underwent conservative surgery. The results showed that radical resection is unlikely to improve the prognosis of patients (5). In another study, radical surgery did not improve or worsen the survival of patients (7). Few studies (6) with small sample sizes reached the same conclusions. These findings are consistent with our research showing that radical resection is not an independent prognostic factor for OS.

However, the above studies did not mention whether radical resection can improve RFS. One study demonstrated that the 5-year survival rate was unrelated to the type of therapy but that radical surgery appeared to control local disease (14). In our study, the surgical approach was associated with RFS according to the multivariate analysis, which corrected for potential confounding factors. RFS was longer in the radical resection group than in the non-radical resection group (mRFS 9.5 vs. 5.3 m) (Figure 1A). To identify better subgroups for RFS between the two groups, we carried out univariate Cox regression analyses, and we did not observe that a particular subgroup was associated with RFS (Figure 6).

Studies have demonstrated that the depth of tumour invasion is an important prognostic factor of mucosal melanomas (15). The cancer staging criteria for cutaneous melanoma include tumour thickness (mm) for assigning T stage (8, 16). Owing to mucosal anatomy, a specific depth is not suitable for staging mucosal melanoma. Similar to the staging criteria for mucosal melanoma of the head and neck, T stage is defined according to whether the tumour is limited to the mucosa or has invaded the immediately underlying soft tissue; it is not defined according to the thickness or greatest dimension of the tumour (8). Hence, in our study, patients were divided into five subgroups: mucosa, muscular layer, serous membrane, adjacent structures, and unknown.

Our study found that lymph node status was associated with RFS but not OS. Only a minority of patients had positive metastatic lymph nodes. This finding may be the main cause of the difference from previous studies. CLND was irrelevant to RFS and OS. Lymphatic mapping with sentinel lymph node biopsy (SLND) is the standard treatment for cutaneous melanoma (17–19) when feasible. The phase III MSLT-II trial included 1,934 evaluable patients to assess the effectiveness of CLND for patients with sentinel lymph node (SNL) metastases (20). The results showed that CLND did not increase melanoma-specific survival among patients with melanoma and sentinel-node metastases, which is in agreement with the results of the DeCOG-SLT trial (19). Lymphatic drainage is quite complex in gynaecologic organs, and SLNs may be in inguinal basins, pelvic basins, or both (21–23). The conditions under which SLND should be performed for gynaecological melanoma remain debated (21, 24).

In our review, a large proportion of the patients were vaginal melanoma, the results is consistent with the previous literatures (25). Cervical melanoma is a very rare histopathologic subtype of primary cervical cancer. In a few case reports, cervical melanoma was managed similarly to cervical carcinoma (26–29). For curative-intent treatment, radical resection is the main surgical approach. In our study, only two patients were treated with non-radical resection.

The common perioperative complications of gynaecological operations are infection, bladder and ureteral injuries, gastrointestinal dysfunctions, and fistulas (30–32). Other complications, such as haemorrhage, deep vein thrombosis, fluid or electrolyte imbalance, and pneumonia, are common in all types of surgeries. Thirty-eight patients died or did not undergo surgery in our centre. Therefore, the information about complications were incompeted. Five patients developed post-operative complications. Among them, two patients who underwent non-radical resection experienced delayed operative incision healing. In the radical resection group, one patient experienced delayed operative incision healing, one patient experienced bowel obstruction and urinary retention, and one patient experienced urinary retention. In the past several decades, the development of surgical techniques and methods of perioperative care, such as reconstructive surgery of the perineum (33, 34), the application of advanced surgical instruments and the implementation of enhanced recovery after surgery (ERAS) pathways (35–37), has decreased perioperative complications and increased patient quality of life.

In our study, we found that adjuvant therapy significantly prolonged RFS and OS for patients with mucosal melanoma. The most common treatments, in descending order, were chemotherapy (39%), IFN (21%) and immunotherapy (10%) (Figure 4A). In a phase II randomised trial, temozolomide-based chemotherapy and HDI prolonged RFS and OS among patients with completely resected mucosal melanoma (38). Some phase III trials, including the Eastern Cooperative Oncology Group (ECOG) E1609 trial (39), Checkmate 238 trial (40), and Keynote-054 trial (41), found that immunotherapy as adjuvant therapy for patients with resected high-risk cutaneous melanoma can significantly prolong RFS. Some of the trials (including ECOG E1609 and Checkmate 238) enrolled patients with mucosal melanoma but did not report details about treatment effectiveness for the mucosal melanoma subgroup.

The strengths of our study are the considerable follow-up time and complete data, and all the data were from the real world, providing real-world evidence. We selected RFS and OS as the endpoints in this study, which can reflect the short-term and long-term outcomes of surgical procedures. Certainly, our study has several limitations. First, it was a retrospective study with unavoidable inherent bias. We strictly followed the principles and methods for observational studies and consecutively identified as many patients as possible to try our best to reduce information bias and selection bias. In addition, we carried out multivariate Cox proportional hazards models to reduce confounding bias. Second, four patients were lost to follow-up; therefore, the effectiveness of the operation and the survival outcomes of these patients could not be evaluated. Third, thirty-eight patients died or did not recieve surgery in our centre; therefore, the information about complications were incomplete. Finally, although our study included a large number of patients compared with the numbers in some previous studies and focused on the effectiveness of different surgical approaches, the sample size of our study was small.

In conclusion, we did not identify a survival benefit of radical surgery in patients with vaginal melanoma and cervical melanoma. The addition of adjuvant therapy prolonged both RFS and OS in patients.

The studies involving human participants were reviewed and approved by Institutional Review Boards of Peking University Cancer Hospital. The patients/participants provided their written informed consent to participate in this study.

This work was supported by Grant No. 81972562 from the National Natural Science Foundation of China.