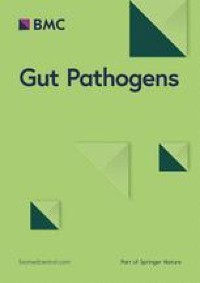 The strain S16 has a chromosome and one plasmid (pS16) and a total length of 4,822,755 bp (Fig. 1), after quality control of 153,596 raw reads with an average read length of 7866 and N50 size of 9870. The genome coverage was found to be 1800-fold. The chromosome was assembled into 4,811,709 bp with a G+C content of 52.17%. The plasmid size was 11,046 bp and had a G+C content of 61.73%. A plasmid (pS16) had an IncQ1 plasmid replicon sequence, and the IncQ1 replicon region (956–1751 bp) showed high homology with the RSF1010 plasmid of Escherichia coli (accession no. M28829.1). IncQ1 plasmids are small (10–12 kb) and broad host range [28]. They are generally associated with aminoglycosides, sulfonamides, and tetracycline resistance genes, although other antimicrobial resistance genes have been identified [28]. Similarly, pS16 carried multiple antibiotic resistance genes including aph(6)-Id, aph(3″)-Ib, sul2, and tet(A), associating resistances of aminoglycoside, sulfonamides, and tetracycline. Annotation of this assembly identified 4852 coding sequences (CDSs), 84 tRNAs, and 22 rRNAs. A total of 4852 CDSs were assigned to COG categories, comprising 20 functional categories. Most of the genes were assigned for the general function prediction only (R, 12.11%), amino acid transport and metabolism (E, 9.66%), and carbohydrate transport and metabolism (G, 8.82%) (Additional file 2: Fig. S1).

Prophages are a critical part of the pathogenic bacterial genome that facilitates various properties for bacteria, such as the acquisition of bacterial resistance [29]. In the strain S16 genome, a total of five prophage regions were identified, and prophage regions are shown in Fig. 1. The prophage 1 region extended from 988,320 to 1,049,335 bp with a GC content of 48.25% and was homologous to genes of the phage vB_SosS_Oslo (accession no. NC018279) found in Salmonella. The prophage 2, 3, 4, and 5 regions were homologous to genes of the phage SPN3UB (accession no. NC019545), 118970_sal3 (accession no. NC031940), Fels_1 (accession no. NC010391), Fels_2 (accession no. NC010463) found in Salmonella, respectively. Moreover, twenty-two different forms of IS-elements and 11 transposons were detected in the strain S16 genome (Fig. 1; Additional file 1: Table S2). Transposon and IS-element are known to play a major role in the dissemination of resistance genes [30]. Alignment of reference genome to strain S16 genome showed complete congruity except for some regions (Additional file 2: Fig. S2). Strain S16 is highly similar to strain CVM19633, but differs in genomic islands and prophages by having unique islands and prophages that are not present in the CVM19633 genome.

Based on the Salmonella species MLST database, the sequence type (ST) was recognized. S. Schwarzengrund strain S16 was typed as ST96 that is associated with strains isolated from poultry and environmental sources [31]. Previously, S. Schwarzengrund ST96 was associated with a carbapenemase-resistant strain isolated from a human in Argentina and extended-spectrum beta-lactamase producing strain from poultry in Brazil [32, 33].

Pangenome analysis showed that 46 genome sequences of S. Schwarzengrund had a pangenome of 7115 genes, which was divided into a core-genome of 3374 genes, an accessory-genome of 2906 genes, and a unique-genome of 835 genes. Here, a set of genes shared by all genomes was defined as core-genome, whereas a set of genes partially shared by genomes and a set of genes unique to a single genome were defined as accessory-genome and unique-genome, respectively [11]. Of the 835 unique genes, 81 were identified as unique genes for strain S16, including the ones encoding helix-turn-helix domain-containing protein, IS3 family transposase, chitinase, helix-turn-helix transcriptional regulator, and hypothetical proteins (Additional file 1: Table S3). Unique genes of strain S16 were assigned in six COG categories: transcription (K); defense mechanisms (V); replication, recombination and repair (L); energy production and conversion (C); inorganic ion transport and metabolism (P); and general function prediction only (R). The functional category, such as transcription (K, 28.17%), was the most enriched among the unique genes of strain S16 (Additional file 2: Fig. S1).

To investigate the genetic environment, strain S16 genome was compared with 45 other genomes of S. Schwarzengrund. Arrow diagrams for the five genomic islands specific to strain S16 are shown in Additional file 2: Fig. S3). As a result, there were five genomic islands in strain S16 that were not found in 45 other genomes of S. Schwarzengrund (Additional file 1: Table S4). Also, the unique genes were not related to mobile genetic element, IS elements, and transposons, but 28 genes out of 81 genes were present on the genomic island (Additional file 1: Table S5). The phylogenetic tree based on core-genome showed that strain S16 clustered with the MDH-25 and MDH-11 genomes (Fig. 2). These strains were isolated from clinical stool samples from humans [8].

In silico identification of antibiotic-resistance genes

The strain S16 carries a multidrug-resistance profile against five antibiotics such as amikacin, streptomycin, ciprofloxacin, sulfamethoxazole, and tetracycline. In the MIC test, strain S16 showed resistance to FIS, STR, and TET, but not to AUG2, FOX, CHL, CIP, GEN, NAL, MEM, FEP, COL, SXT, AMP, CAZ, XNL, IMI, FOT, AXO, AZI, and AMK (Table 1). Genotype was concordant with broth microdilution, and genes responsible for resistance to sulfisoxazole, streptomycin, and tetracycline were found in the S16 genome. However, despite the presence of gyrB and aac(6′)-Iaa genes, strain S16 showed no resistance to ciprofloxacin and amikacin in MIC test. The aac(6′)-Iaa gene is responsible for resistance to amikacin, kanamycin, or tobramycin. Thus, strain S16 may have resistance to kanamycin or tobramycin, which was not tested in this study [37]. Also, the gyrB gene in the strain S16 genome may be related to resistance to other quinolone antibiotics, such as oxolinic acid, instead of ciprofloxacin [38].

Among the resistance genes in the S16 genome, aac(6′)-Iaa gene was found to be present in the chromosome, whereas aph(3″)-Ib, aph(6)-Id, sul2, and tetA were found to be in the plasmid. Moreover, a single copy of gyrB gene was present on the chromosome. The strain S16 co-harbors the tetA gene, implicated in the resistance to tetracycline, and the sul2 gene encoding sulfonamide-resistance. The sul2 and tetA genes are the most prevalent resistance genes detected in animals and animal-food isolates [39, 40]. Quinolone (ciprofloxacin) is the antimicrobial drug of choice to treat complicated gastrointestinal infections, and resistance to ciprofloxacin has been reported in many isolates of Salmonella species [41,42,43]. Quinolone resistance in Salmonella serovars is often mediated by one or more mutations in DNA gyrase and topoisomerase IV [42]. Of the 46 S. Schwarzengrund genomes, five genomes, including strain S16, with a mutation in DNA gyrase were identified in this study. In clinical human and veterinary isolates of Salmonella serovars, mutations are usually confined to gyrA [41]. Similarly, mutations were observed at Ser-83 (Ser to Phe) and Asp-87 (Asp to Gly) of gyrA in CVM19633 and NCTR75 genomes; the mutation was observed only at Ser-83 (Ser to Phe) of gyrA in NCTR487 and NCTR30 genomes (Fig. 3). Unlike other genomes with gyrA, strain S16 showed a mutation at codon 464 of gyrB (Ser to Phe). Meanwhile, the qnr gene, a plasmid-mediated gene conferring resistance to antibiotics (such as ciprofloxacin) used to treat food animals [44], is also associated with quinolone resistance and was detected in two strains (12,888 and 9355) in this study.

In silico identification of virulence genes

In the strain S16 genome, 153 virulence genes, including fimbrial adherence determinants, non-fimbrial adherence determinants, macrophage-inducible genes, magnesium-uptake genes, regulation, secretion system, and toxin genes, were identified. Salmonella serovars contain multiple fimbriae on their surface, some of which play an essential role in adhesion to enterocytes to induce and maintain infection [47]. The Salmonella atypical fimbrial (Saf) operon, which is important for pathogenesis in serovars, such as Typhimurium, was absent in some serovars, such as Heidelberg, whereas it was present in all S. Schwarzengrund [47]. The cytolethal distending toxin cdtB, a typhoid-associated virulence factor, was detected in almost all genomes, including strain S16, similar to previous studies that detected this gene in S. Schwarzengrund isolates [40, 48]. Thus, these genomes harboring cdtB encode typhoid toxins that may contribute to human and animal pathogenicity.