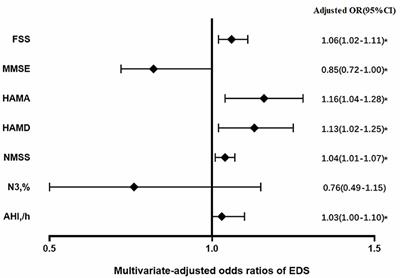 Multiple system atrophy (MSA) is defined as an episodic and rapidly progressing neurodegenerative disease characterized by Parkinsonism, autonomic dysfunction, and/or ataxia. According to its clinical manifestations, MSA is classified into MSA-P in the event that the patient presents with Parkinsonism symptoms and MSA-C if the patient develops cerebellar dysfunction (1). Currently, non-motor symptoms are well-known to have a significant impact on the quality of life as well as the motor symptoms among patients with MSA (2). Excessive daytime sleepiness (EDS) is a common non-motor symptom in patients with MSA. The previously reported prevalence of EDS in patients with MSA was 24–28% (2, 3), which was significantly higher than the prevalence of 2% in the healthy control group (2). EDS was considered as the result of inadequate sleep or sleep-related breathing disorder (SRBD) in MSA (2–4), but the most relevant cause might be the neural systems pathophysiological impairment, including cholinergic neurons in the mesopontine tegmentum, hypocretin/orexin neurons of the lateral hypothalamus, serotonergic neurons of the rostral raphe, and dopaminergic neurons in the ventral periaquapular gray matter (5–7).

The present cross-sectional study enrolled 66 consecutive patients with “probable MSA” from the Department of Neurology of West China Hospital between 2017 and 2020. The diagnosis of MSA was based on the standard criteria of the Second consensus statement (2008) by neurologists (11). Patients were included if they (1) met the diagnostic criteria for probable MSA, (2) completed the assessments of subjective questionnaire scales and polysomnography (PSG), (3) and showed no signs of intracranial lesion on brain magnetic resonance imaging. Patients were excluded if they (1) had signs or symptoms of other neurologic diseases; (2) used medications or substances that might affect their sleep cycle, such as hypnotic drugs, antidepressants, selective serotonin reuptake inhibitors, and antipsychotic agents; or (3) were critically ill or presented unstable vital signs. The study was approved by the West China Hospital Clinic Research Ethics Committee, and all patients and their guardians provided written informed consent.

The comparisons of demographic and clinical characteristics between patients with and without EDS are presented in Table 1. There were no significant differences in age, MSA onset age, disease duration, UMSARS, RBDSQ, and PSQI scores between the two groups. However, compared with the MSA patients without EDS, their counterparts with EDS had higher scores of FSS, NMSS, HAMA, and HAMD. Conversely, the patients with EDS had lower MMSE scores (P < 0.05).

The comparisons of the subitems of the NMSS scale between MSA patients with and without EDS are shown in Table 2. Patients with EDS had higher scores for sleep/fatigue, mood disorder, perceptual problems, attention/memory dysfunction, gastrointestinal dysfunction, unexplained pain, and weight changes.

Table 2. Non-motor symptoms scale (NMSS) of MSA with and without EDS.

The comparisons of PSG parameters between MSA patients with and without EDS are shown in Table 3. No significant differences were found between MSA patients with and without EDS in terms of total sleep time (TST), sleep efficiency (SE), sleep latency (SL), the percentages of N1, N2, and REM sleep stage, minimum SaO2, and periodic leg movement index. However, there were significant differences in sleep-breathing-related variables between the two groups. Compared with the MSA without EDS group, the MSA with EDS group had significantly higher AHI, central apnea index (CAI), and hypopnea index (HI). Similarly, there was a slightly higher obstructive apnea index (OAI) in patients with EDS. In addition, the MSA with EDS group had a lower percentage of N3 sleep.

Table 3. Comparisons of sleep parameters between MSA patients with and without EDS.

As far as we know, there is little literature investigating the differences of motor and non-motor symptoms between MSA patients with and without EDS. The present study found that the prevalence of EDS was 27.3% among patients with MSA, which is rather similar to those previously reported in Japan (24%) and in Europe (28%) (2, 4). Notably, a previous study showed that the incidence of EDS in MSA was similar to that of patients with PD (28 and 29%, respectively).Thus, these findings indicated that EDS is relatively common in patients with MSA as well as other synucleinopathies like PD.

REM-sleep behavior disorder (RBD) is characterized by the loss of muscular atonia and prominent motor behavior during REM sleep, which is a common symptom in patients with MSA (16). The prevalence of RBD is up to 69–100% in patients with MSA (17–19). Therefore, RBD is considered as a “red flag” which is associated with the faster progression and greater severity of synucleinopathies including PD and MSA (20). This study investigates the association between EDS and clinical symptoms including motor and non-motor symptoms and addressed the question of whether EDS—like RBD—aggravates the progression of MSA (20). Finally, we found there were no differences in age, disease duration, MSA sub-type, and UMSARS scores between the groups with and without EDS. Similarly, a previous study reported that there was no correlation between EDS and the severity of motor symptoms in patients with MSA (2). Even so, a larger study is necessary to determine the relationship between EDS and motor dysfunction in MSA.

The strengths of the present study included the considerable sample size and the comprehensive clinical and PSG variables. However, several limitations should be noted in this study. First, the diagnosis of MSA was based on clinical assessment and no autopsy confirmed the diagnosis, but we strictly followed the standard diagnostic criteria to ensure accuracy and consistency. Second, all patients that we included were required to have met the diagnostic criteria of probable MSA, which may have contributed to a selection bias toward more severe cases. Third, patients who took medicines such as hypnotic drugs antidepressants were excluded, which may potentially mean that patients with severe non-motor symptoms were excluded. Fourth, the EDS diagnosis was based on a questionnaire but no objective assessments of sleepiness, such as the multiple sleep latency test (MSLT). Finally, this is a cross-sectional study, and the present results should be verified and extended by larger, multicenter longitudinal studies of MSA in the future.

Our study found that 27.3% of patients with MSA had EDS, and the non-motor dysfunction including fatigue, anxiety, depression, cognitive dysfunction, and sleep-related breathing disorders were associated with an increased risk of EDS. These results may suggest that the difference of involved brain area between patients with and without EDS. Further study on the anatomic pathologic mechanism underlying EDS in MSA is needed.

The original contributions presented in the study are included in the article/Supplementary Material, further inquiries can be directed to the corresponding author/s.

The authors would like to thank the study participants and the staff of the Sleep Medicine Center of West China Hospital.

The Supplementary Material for this article can be found online at: https://www.frontiersin.org/articles/10.3389/fneur.2021.798771/full#supplementary-material