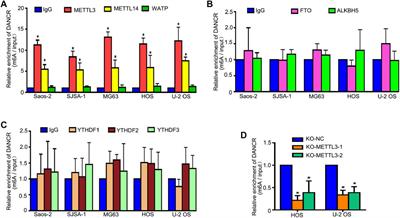 Osteosarcoma (OS) is the most common primary malignant bone tumor and is characterized by the formation of immature bone or osteoid by cancer cells. The disease usually develops in children and adolescents, thus ranking it as the fifth most frequent cancer among 15–19-year-olds (Durfee et al., 2016; De Azevedo et al., 2020). Although a combined therapy approach of surgical tumor removal and chemotherapy has increased survival rates, the 5-year survival rate of OS patients remains unsatisfactory (Isakoff et al., 2015). Based on previous reports, patients with localized OS have a 5-year survival rate of approximately 70%, whereas the rate of those with metastatic OS varies from 11% to 30% (Harrison et al., 2018). Moreover, approximately 80% of OS patients having undergone surgical treatment may relapse, thus leading to a poor prognosis (Briccoli et al., 2010). Therefore, underlying mechanisms must be identified to generate novel therapeutic strategies for OS treatment.

Long non-coding RNAs (lncRNAs) are transcripts that exceed 200 nucleotides, with no protein coding abilities, but with vital roles in diverse biological processes and disease etiology (including tumorigenesis) (Fang and Fullwood, 2016). Among these molecules, lncRNA DANCR is a newly identified oncogene implicated in diverse malignances, including gastric cancer (Pan et al., 2018), breast cancer (Tang et al., 2018), and hepatocellular carcinoma (Ma et al., 2016), and may function as a competing endogenous RNA or be involved in the epigenetic regulation/modulation of gene expression.

Forty pairs of human OS tissues and corresponding adjacent tissues were collected at The Third Affiliated Hospital of Southern Medical University from July 2013 to July 2015 and stored at −80°C until required. No patients had chemotherapy before surgery. Written informed consent was obtained from all patients. The study was approved by the ethics committee of our university.

METTL3 deletion was performed using CRISPR/Cas9 technology. HOS and U-2 OS cells were transfected with METTL3 CRISPR/Cas9 and homology-directed repair (HDR) plasmids. After this, stable cells were collected.

In the first day, both two OS cell lines were transfected, followed by trypsinization and resuspension in serum-free medium. Cells were then added to transwell chambers at a density of 3×104 cells. After a 24-h culture, chambers were carefully removed from wells and a cotton-tipped bud was used to wipe cells in the upper chamber. Then, after 20 min of fixation in 4% paraformaldehyde, 0.1% crystal violet was added to the upper chamber to stain cells for approximately 20 min. Finally, cells were rinsed in 1× phosphate-buffered saline (PBS) to remove excess crystal violet. Migrated cell numbers were calculated using an inverted microscope. For invasion assays, protocols were similar to migration assays except chamber inserts were coated with Matrigel.

For in vivo studies, BALB/c-nu/nu mice (male, body weight = 18–22 g, and 6 weeks old) were purchased from the Shanghai Research Center of the Southern Model Organisms. All experimental protocols were performed under the guidelines of the Animal Care and Use Committee of The Third Affiliated Hospital of Southern Medical University. Xenograft tumors were established by subcutaneous injection with stable cell lines (3,000,000 per point).

METTL3 is Upregulated in OS Tumor Tissues and Cell Lines

To gain clear molecular insights into the functional role of DANCR during OS progression, a comprehensive assessment of DANCR, including clinical significance and loss-of-function assays, was performed. First, Spearman correlation tests indicated that DANCR expression was positively correlated with METTL3 expression in OS tissues (Figure 4A). Moreover, elevated DANCR expression was detected in OS tissues when compared with paired normal tissues (Figure 4B). Also, consistent with a previous report, our Kaplan–Meier analyses showed improved survival rates in patients with lower DANCR levels than those with higher levels (Figure 4C).

Based on these clinical data, we investigated DANCR’s role in OS cells. Firstly, DANCR expression was examined in all OS cells and hFOB 1.19 cells. Our RT-qPCR analyses demonstrated significantly increased DANCR levels in OS cells when compared with hFOB 1.19 cells (Figure 4D). We next performed CCK-8 assays to determine cell proliferation after DANCR silencing. As shown in Figures 4E,F, DANCR knockdown significantly reduced HOS and U-2 OS cell proliferation. Also, transwell assays showed that DANCR silencing suppressed HOS and U-2 OS cell migratory and invasive capacities, suggesting an oncogenic role for the METTL3/lncRNA DANCR axis (Figures 4G–J). To further uncover regulatory mechanisms, lncRNA DANCR knockdown was performed to assess METTL3 expression; METTL3 levels were consistent before and after DANCR silencing (Figure 4K–L). Thus, the oncogenic role of METTL3 may have been mediated by DANCR.

The Oncogenic Role of METTL3 is Mediated by lncRNA DANCR Activation

To further investigate regulatory mechanisms underlying the oncogenic role of METTL3 during OS progression, DANCR expression after METTL3 silencing was explored. METTL3 silencing suppressed DANCR expression in two OS cell lines (Figure 5A). Moreover, to further confirm that the oncogenic role of METTL3 was mediated by DANCR activation, CRISPR/Cas9-METTL3-silenced cells were transfected with si-DANCR or a corresponding control, followed by CCK-8 assay. Consistent with previous findings, silencing METTL3 or DANCR reduced cell viability. Moreover, after silencing both METTL3 and DANCR, we identified more reduced cell proliferation, suggesting that DANCR may be a potential downstream target of METTL3 (Figures 5B,C). Concordantly, after silencing both METTL3 and DANCR, OS cells passing through membranes, with or without Matrigel, were reduced when compared to individually silencing METTL3 or DANCR (Figures 5D–G).

OS is one of the most prevalent cancers among children and adolescents, with a heterogeneous presentation and relatively high mortality rates (Broadhead et al., 2011). Although the overall survival rate has improved due to combinative treatments, many patients still experience poor prognoses (Harrison et al., 2018). Thus, a comprehensive examination of mechanisms driving OS progression is required to identify OS treatments.

In terms of how METTL3 is implicated in tumorigenesis, previous studies proposed two distinct m6A-dependent or m6A-independent processes. For instance, Li et al. suggested that the oncogenic effects of METTL3 were promoted by SOX2 mRNA stability in an m6A-IGF2BP2-dependent manner (Li et al., 2019). In other research, METTL3 potentially served as an oncogene in lung cancer by promoting the translation of several mRNAs via translation initiation machinery interactions, thus identifying a novel METTL3 mechanism in cancer progression (Lin et al., 2016). In our study, differential DANCR expression between patients was associated with better and worse prognoses; thus, DANCR could be a target of METTL3.

LncRNA DANCR is associated with poor prognoses in a variety of malignant tumors and reportedly has diverse regulatory functions in several cancers, thus functioning as a potential therapeutic target (Thin et al., 2018). We first observed that DANCR expression was associated with a worse OS prognosis. Moreover, similar to METTL3, DANCR silencing also suppressed OS cell proliferation, migration, and invasion. Moreover, silencing both METTL3 and DANCR significantly suppressed OS cell growth and metastasis when compared to the individual silencing of METTL3 or DANCR. Taken together, we hypothesize oncogenic METTL3 was mediated by DANCR activation during OS progression. Given two distinct regulatory processes, we speculated whether METTL3 regulated DANCR expression through m6A modification. From our RIP-qPCR analyses, METTL3 promoted DANCR mRNA stability via m6A modification.

In summary, we characterized the oncogenic function of METTL3 during OS progression. METTL3 knockout inhibited OS cell proliferation, migration, and invasion. Moreover, ours was the first study to report that METTL3 promoted OS cell tumorigenesis and progression by increasing DANCR mRNA stability via m6A modification.

The original contributions presented in the study are included in the article/Supplementary Material; further inquiries can be directed to the corresponding authors.

The study has received the approval of the ethics committee of The Third Affiliated Hospital of Southern Medical University. The patients/participants provided their written informed consent to participate in this study.

XZ participated in the writing of the article and the design and proposal of the concept. YY, YL, GL, and DK collected the data and drafted the papers. BZ and QL make important revisions to the paper and approve the final version of the paper for publication.

The Supplementary Material for this article can be found online at: https://www.frontiersin.org/articles/10.3389/fcell.2021.784719/full#supplementary-material