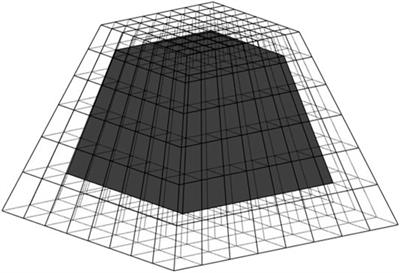 Reverse time migration (RTM) (Baysal et al., 1983; Xuan et al., 2014; Qu et al., 2015; Xu et al., 2021a; Du et al., 2021) and full-waveform inversion (FWI) (Tarantola, 1984; Virieux and Operto, 2009; Cai and Zhang, 2015; Xia et al., 2017; Jia et al., 2019) play a fundamental role in geophysical exploration. Since forward modeling of the wave equation consumes most computational time in the RTM and FWI processes (Jing et al., 2019; Xu et al., 2021b; Liu et al., 2021), how to achieve the improvement of efficiency and the reduction of memory usage without a significant decrease of accuracy for 3D large-scale modeling is a key problem of seismic modeling. The finite-difference (FD) method has been regarded as one of the most popular wave modeling methods for its easy implementation and high-computational efficiency (Antunes et al., 2014; Abreu et al., 2015; Xu and Gao, 2018; Robertsson and Blanch, 2020). However, the numerical dispersion of the traditional FD method leads to the use of fine grids or high-order operators (Dablain, 1986; Liu and Sen, 2011b), which inevitably affects the efficiency of simulation.

The conventional FD method literally adopts a weighted summation of neighboring grid points’ values to estimate the derivative for a designated grid point (Zhou et al., 2021), where the grid size (h) is fixed and the FD coefficients are calculated by Taylor expansion. In this way, the approximation error ϵ can be expressed as (Liu and Sen, 2011a; Wu et al., 2019b) follows:

where 2M is the length of the FD operator, h is the spatial interval, f is the frequency, and v is the seismic wave velocity. Considering that λ = v/f is the wavelength and G = λ/h is the number of grid points per wavelength (NPPW), we can rewrite Eq. 1 as follows:

Eq. 2 indicates that the modeling accuracy of the conventional FD method is proportional to G and M. Because the seismic wave velocity is varying in different positions, the wavelength is short in low-velocity regions and long in high-velocity regions (Liu, 2020). Therefore, a part of computing resources is wasted in the high-velocity regions for the fixed spatial interval and FD order. With respect to this problem, there are two kinds of techniques corresponding to the different understanding of Eq. 2. The first one is the variable-operator FD method (Liu and Sen, 2011a), which adopts the long and short FD stencils in the low- and high-velocity region, respectively. For the scheme in Liu and Sen (2011a), the variable-length FD stencils are designed by approaching the dispersion relation in the time–space domain, and Liu (2020) subsequently optimizes their FD coefficients.

In this article, we propose a 3D trapezoid-grid FDTD method for acoustic wave modeling. First, we design the 3D trapezoid coordinate transformation and derive the 3D acoustic equation in the trapezoid coordinate system. Second, to reduce the artificial boundary reflection (Ma et al., 2018, Ma et al., 2019), we apply the corresponding trapezoid-grid convolutional perfectly matched layer (CPML) absorbing boundary condition. Third, stability analysis is given to generate stable modeling results. We then test our proposed method on the 3D homogenous model and the SEG/EAGE overthrust model and compare the efficiency and accuracy of the trapezoid-grid FDTD method with the uniform-grid FDTD method. Finally, conclusions are shown in the last section.

In this article, the 3D trapezoid coordinate transformation is defined as

where f0 is the dominant frequency of the source term, N0 is the preferred NPPW and is related to the accuracy of the adopted FD scheme, and vmin(g(z)) is the selected minimum velocity at depth g(z) in the physical Cartesian coordinate system and is smoothed by solving a local polynomial fitting problem with the constraint that vmin(g(z)) should not be greater than the model minimum velocity at depth g(z). The central value of each local polynomial corresponds to a value of vmin(g(z)). In particular, we usually set the order of the local polynomial as three. Such vmin(g(z)) can lead to a smooth sampling function g(z) for discontinuous velocity variation while satisfying the required number of points per wavelength in the z0-direction.

If the grid sizes for the trapezoid-grid FDTD in the trapezoid coordinate system are defined as Δx, Δy, and Δz, then the corresponding grid sizes in the physical Cartesian system can be described as

According to the theory of Pasalic and McGarry (2010), the time-domain-discretization form of the 3D isotropic acoustic equation with the CPML absorbing boundary condition in the Cartesian coordinate system can be described as

where uj = u(x0, y0, z0, tj) represents the scalar wavefield at the jth time step in the Cartesian coordinate system; v is the velocity; Δt is the time interval; f(t) is the source term;

is the position of source;

, where R denotes the designated theoretical boundary reflection coefficient, vmax is the maximum velocity of the model,

is the thickness of CPML absorbing boundary along the τ0 direction, and

denotes the distance to the inner area in the τ0 direction;

are axes along diagonals in the (x, z) planes,

are axes along diagonals in the (y, z) planes, and

are axes along diagonals in the (x, y) planes. θ1 is the angle between x and

axes, θ2 is the angle between y and

axes, and θ3 is the angle between x and

axes. A schematic of the coordinate transform in Eq. 8a is shown in Figure 2.

By using Eqs. 8a–c, the mixed spatial derivatives in Eq. 7f can be transformed as

For simplicity, we usually use equal grid sizes in the trapezoid coordinate system (Δx = Δy = Δz = Δ), which means

. By substituting Eq. 7 and Eq. 9 into Eq. 6, we get the time-domain-discretization form of the 3D acoustic equation with the CPML absorbing boundary condition in the trapezoid coordinate system as

, where Lτ is the thickness of CPML absorbing boundary along the τ direction,

denotes the distance to the inner area in the τ direction; and

FIGURE 3. Schematic of the grid discretization in the 3D trapezoid-grid CPML area.

Stability condition is usually required for the FD scheme to give a stable time step. From Eq. 10a, we use a local frozen coefficients technique in each discrete point and can get the full-discretization form of the 3D trapezoid coordinate system acoustic equation without the CPML boundary condition and source function:

To derive the stability condition, we use the plane wave solution that is defined as

is the amplitude of the plane wave, i is the imaginary unit, ω is the angular frequency, and kx, ky, kz are wavenumbers in the x-, y- and z-directions, respectively. Similar to stability analysis of Kosloff and Baysal (1982), by substituting Eq. 12 into Eq. 11 and only considering the maximum wavenumber, the stability condition of the 3D acoustic equation in the trapezoid coordinate system can be expressed as

where mod is the function for the getting remainder, and

represents the maximum value of the objective function at those discrete points (xm, yn, zl).

In the following numerical examples, Eq. 10 is discretized by the eighth-order FD in the space, and conventional Taylor-expansion–based high-order FD coefficients (Dablain, 1986) are adopted.

First, we use a 3D homogenous model with a constant velocity of 2000 m/s to verify the effectiveness of our trapezoid-grid FDTD method and corresponding CPML absorbing boundary condition. A Ricker wavelet with a dominant frequency of 20 Hz is located at the center of the model as the source. The FD time step is taken as 1.6 ms. The scaling parameter γ is set as 2.78 × 10–4, the sampling function g(z) = z, and the lateral grid sizes in the Cartesian coordinate system increase from 7.5 to 10 from top to bottom. Figure 4A shows the snapshot obtained by the trapezoid-grid FDTD with CPML at 0.45 s, while Figure 4B shows the corresponding snapshot without CPML. Figure 5 shows the comparison between the recorded seismograms computed by the uniform-grid FDTD and the trapezoid-grid FDTD at (x0, y0, z0) = (600, 600, 0 m). The comparison between Figures 4A,B demonstrates that trapezoid-grid CPML can effectively reduce boundary reflections, while Figure 5 demonstrates the accuracy of the trapezoid-grid FDTD method for the homogenous model.

FIGURE 4. Snapshots obtained by the trapezoid-grid FDTD for the homogenous model (A) with CPML and (B) without CPML.

FIGURE 7. (A) Vertical sampling function g(z); (B) variation of Δz0 for the trapezoid-grid FDTD.

In this article, we propose a 3D trapezoid-grid FDTD seismic wave modeling method based on the increasing trend of seismic wave velocity with depth. The trapezoid-grid mesh in the physical Cartesian system can effectively reduce the oversampling in the high-velocity region compared with the uniform-grid method, and the design of 3D trapezoid coordinate transform greatly avoids the difficulty of processing an irregular grid. We derive the 3D acoustic equation in the trapezoid coordinate system. The corresponding CPML boundary condition is also given to decrease artificial boundary reflection. To obtain a stable and efficient wave modeling result, we combine the plane wave theory and frozen coefficients technique and provide an effective stability condition for the 3D trapezoid-grid FDTD method. The discretization of the 3D acoustic equation in the trapezoid coordinate system is completed by the eighth order and second order finite-difference method in the space and time domain, respectively. The 3D homogenous model is given to verify the effectiveness of trapezoid-grid FDTD and the performance of the CPML boundary. Numerical tests on the SEG/EAGE overthrust model indicate the accuracy and the significant memory reduction of our method compared with uniform-grid FDTD. The key idea of our method is the combination of the trapezoid coordinate transformation and the FD stencils. Such idea can be generalized to many other wave equations such as elastic equation (Zhan et al., 2017) and Maxwell’s equations (Zhan et al., 2021). Besides, our method is actually dealing with the regular grids in the trapezoid coordinate system, which means that we can combine other methods to treat the irregular surface (Li et al., 2020) or curved interfaces (Zhan et al., 2020).

The original contributions presented in the study are included in the article/Supplementary Material; further inquiries can be directed to the corresponding author.

Authors BW, WT, and BL are employed by SINOPEC.