Clinical Significance and Risk Factors of Local Recurrence in Synovial Sarcoma: A Retrospective Analysis of 171 Cases 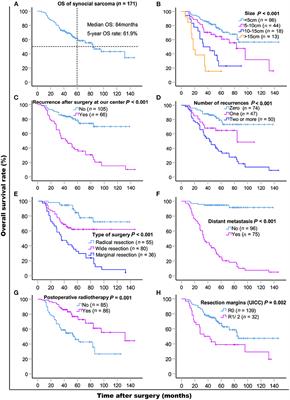 Synovial sarcoma (SS) is a malignant tumor that accounts for 5–10% of soft tissue sarcomas (STS) (1) and is most common in teenagers and young adults. Histologically, SS can be divided into three subtypes: monophasic fibrous, biphasic, and poorly differentiated SS. Recent studies assessing molecular genetics have shown that over 90% of SS cases are characterized by the t (X; 18) (p11.2; q11.2) translocation, which results in the formation of an oncogenic fusion gene (SS18-SSX1, SS18-SSX2, or SS18-SSX4) (2–4). The standard treatment for SS is complete removal of the tumor with a negative resection margin and peri-operative radiation if indicated. However, the role of adjuvant chemotherapy remains controversial and has only been retrospectively confirmed to improve survival in high-risk patients (5). Previous clinical studies have demonstrated that prognostic factors for SS survival include age (6–8), initial tumor size (6, 8, 9), local recurrence (LR) (9, 10), surgical method of resection (11), histological subtype (8, 12), gene fusion type (13, 14), metastasis (9, 13–17), and post-operative radiotherapy (18). Recently, it has been reported that LR may affect prognosis in STS patients (19, 20), but there is limited evidence on the impact of LR on prognosis of SS patients. The purpose of this study was to investigate the impact of LR on the prognosis of SS and to explore the risk factors associated with LR.

We retrospectively analyzed the clinical data of patients with SS who underwent surgery at our center between March 2005 and December 2016. All patients underwent standardized computed tomography (CT) or magnetic resonance imaging (MRI) and chest CT scans to assess local and distant metastasis (DM). Pre-operative percutaneous biopsies or incision biopsies were performed in newly diagnosed patients. The diagnosis was confirmed by histopathology and immunohistochemistry for all 171 participants included in this study. In 146 (146/171, 85.4%) patients, SS18-SSX chromosome fusion gene testing was carried out for further confirmation of diagnosis. The exclusion criteria included as follows: (1) DM or tumors other than SS at the initial visit; (2) follow up <3 years, or missing follow-up data. Data on clinical characteristics, treatment, and outcome were analyzed as part of this study.

All patients underwent surgery, which included: radical resection, wide resection, and marginal resection. Post-operative radiotherapy was performed for high-risk patients (i.e. patients with an initial tumor size ≥5 cm, deep location of the tumor (in relation to the fascia), positive resection margins, or patients who exhibited recurrence). The target area was the tumor bed and the surrounding edges (2–3 cm). The median total radiation dose was 60 Gy, ranging between 50 and 75 Gy. Adjuvant chemotherapy was carried out with either MAID (Mesna + Adriamycin + Ifosfamide + Dacarbazine) or AIM (Adriamycin + Ifosfamide + Mesna) in high-risk patients who received 4 to 6 courses of adjuvant chemotherapy treatment. Reoperation was considered for patients with recurrence or limited metastasis, if radical resection was possible. Patients with unresectable or diffuse metastatic disease were offered palliative treatment including surgery, chemoradiotherapy, targeted therapies, interventional ablation, or hyperthermic perfusion chemotherapy. For advanced SS patients that were not previously exposed to anthracyclines, anthracycline-based chemotherapy was the standard treatment regimen. Conversely, second-line treatments such as a GVP regimen (Gemcitabine + Vincristine + Cisplatin) were used in palliative chemotherapy (21).

Patients were followed up every 3 months for the first 2 years after surgery, then twice a year between years 2 and 3 after surgery, and subsequently once a year. LR and DM were determined by objective clinical, radiological, or histological examination. The primary outcome was OS, LRFS, and DRFS. Statistical analysis was performed using SPSS 25.0 software. Standard Kaplan-Meier analysis was used to develop the survival curve and estimate OS, LRFS, and DRFS. Univariate analysis of prognosis was performed. A Cox proportional hazards regression model was used to analyze factors affecting prognosis. All statistical tests were two-sided and a p < 0.05 was considered statistically significant.

A total of 171 patients with SS were included in this retrospective analysis. Clinical characteristics of included patients are summarized in Table 1. Seventy-two (72/171, 42.1%) patients were readmitted to hospital due to recurrence, of whom 16 (16/72, 22.2%) relapsed twice or more, and 30 (30/72, 41.7%) exhibited early recurrence (i.e., within 12 months of the original disease). Tumors were predominantly located in lower limbs (94/171, 55.0%) with a median size of 5 cm (1–23 cm). Most tumors were located deep below the fascia. T staging was carried out based on the maximum diameter of tumors at different locations (AJCC8).

Table 1. Clinical, pathological, and therapeutic information of 66 cases with local recurrence and 105 cases without recurrence after surgery at our center.

Impact of Local Recurrence on OS

Table 2. Univariate and multivariate analysis of variable factors and OS.

Figure 1. Kaplan-Meier overall survival curves of patients with synovial sarcoma (A) and compared according to (B) tumor size, (C) recurrence after surgery at our center, (D) the number of recurrences, (E) type of surgery, (F) distant metastasis, (G) post-operative radiotherapy, (H) resection margins (UICC). Log-rank test was used to compare curves, number of patients in subgroup (n) and significance (P) are shown on panels.

Impact of Local Recurrence on DRFS

Table 3. Univariate and multivariate analysis of variable factors and DRFS.

Impact of Local Recurrence on LRFS and Risk Factors of LRFS

Table 4. LRFS in 99 patients with synovial sarcoma without history of recurrence, as determined with univariate and cox multivariate analyses.

SS is a high-grade soft tissue sarcoma with high rates of recurrence and metastasis. The negative effect of LR on long-term survival of patients has been previously demonstrated. For instance, Bergh et al. (10) showed that LR results in a 3.6-fold increase in mortality. In our study, we found an 1.967-fold increase in risk of death of patients with recurrence compared to those without. Although the number of recurrences was negatively correlated with OS in univariate analysis, it was no longer a significant prognostic factor in multivariate analysis. However, the number of SS recurrences was a risk factor for LR and DM, which were in turn important factors influencing survival time.

In our study, 79.1% of recurrences and 73.0% of metastasis occurred during the first 3 years of initial diagnosis, and we found a significant correlation between LR and DM. Consistent with the research by Deshumukh (9), more than half of patients with a history of recurrence experienced another relapse, and 82.0% of the patients with multiple relapses developed metastasis. Importantly, the interval at which recurrence occurred following initial diagnosis was significantly correlated with OS and LR. Patients with early recurrence after the initial surgery (i.e. within the first 12 months) had a higher risk of recurrence (HR: 2.148) and earlier relapses, but it may be related to almost half of these patients received unplanned resection. Early recurrence usually indicates a high risk for metastasis. In our study, we identified that larger initial tumor sizes, a previous history of recurrence, marginal resection, and positive resection margins are risk factors for early LR. We found that both early and multiple recurrences are indicators of a poorer prognosis.

A history of multiple recurrences is associated with a higher risk of LR. In order to assess risk factors other than a prior history of recurrence, we next analyzed the risk factors of LR in patients without a history of recurrence. Multivariate analysis revealed that larger and late-stage tumors significantly increased the risk of LR. Radical resection with negative margins was a key determinant of reducing the risk of LR. Post-operative radiotherapy reduced the risk of recurrence by 0.660 (HR: 0.340). Male patients were more likely to relapse than female patients. Interestingly, this may be related to a frequency of the SYT-SSX1 fusion transcript, which has been shown to be independently associated with an increased risk of early recurrence (22), in males.

Given the poor prognosis of recurrent SS, it is difficult to treat via localized surgery and more aggressive resection is often required. Therefore, initial treatment is critical for the prognosis of SS, impacting patient mortality and recurrence rates. At present, surgical resection with negative margins in combination with radiotherapy is widely used in patients with SS. Repeat surgery has an overall positive effect for the management of recurrent SS. The NCCN guidelines recommend radiotherapy as a standard adjuvant therapy after surgery (23). A large study previously found that perioperative radiotherapy in SS patients was associated with higher negative margin rates and better outcomes (24). In line with this, we also found that radiotherapy was beneficial for local tumor control. Pisters et al. (25) reported a 5–10% LR rate for T1 primary sarcomas with microscopically positive (R1) final surgical margins, after using of radiation. O’Donnell et al. (26) showed that the LR rate was 15% for positive margins in the setting of radiotherapy. Although more than half of the patients included in this study received post-operative radiotherapy, LR rates of T1 and T4 tumors were 21.9 and 84.6%, respectively. This was likely due to the high proportion of patients with a prior history of recurrence in our study. In the 99 patients without a history of recurrence, the LR rate of T1 tumors was 14.5%.

Local recurrence of SS is a key risk factor for OS, early and multiple recurrences are indicators of a poorer prognosis. The identification of prognostic factors for LR is required to obtain better control and guide comprehensive treatment of patients in order to achieve better survival rates. According to our study, early detection of tumors, early radical resection with negative margins, and multidisciplinary comprehensive treatments can help reduce the LR and therefore improve the prognosis of SS.

The studies involving human participants were reviewed and approved by the Institutional Review Board of Fudan University Shanghai Cancer Center approved this study (1310128-1 & 1310128-1-1312). The patients/participants provided their written informed consent to participate in this study.

This work was supported by the grants from the Beijing Medical and Health Foundation (YWJKJJHKYJJ-F2189E).