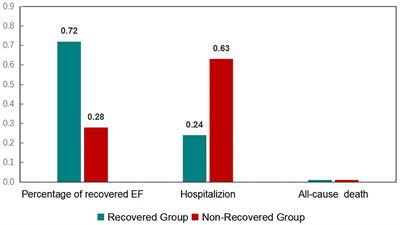 The atrial fibrillation epidemic has been closely linked to a concomitant rise in heart failure (HF) morbidity and mortality (1). The estimated incidence of HF among patients with atrial fibrillation (AF) is 1.58 to 4.4 per 100 person-years. HF and AF often coexist in clinical practice (2). When present in combination, AF and HF portend a worse prognosis than either condition alone.

Recent randomized controlled trials (RCTs) reported clinical improvements in mortality, HF hospitalizations, left ventricular ejection fraction (LVEF), and quality of life in patients with HFrEF (HF with reduced ejection fraction) who had AF ablation (3–5). The Catheter Ablation vs. Medical Rate Control in AF and Systolic Dysfunction (CAMERA-MRI) and Pulmonary-Vein Isolation for AF Patients with HF (PABACHF) trials reported that 58–76% of patients had normalization of EF after AF ablation compared with patients receiving another medical therapy (6, 7). CASTLE-AF was the largest RCT to compare the hard endpoints between ablation and medical therapy in patients with AF and HF (8). Catheter Ablation versus Standard Conventional Therapy in Patients with Left Ventricular Dysfunction and Atrial Fibrillation (CASTLE-AF) revealed a benefit of mortality and HF hospitalizations in AF ablation patients. However, only a small number of selected patients underwent AF ablation in these trials, the largest one having only 179 patients randomized to the AF ablation group. The AF Management in Congestive HF with Ablation (AMICA) trial was a large RCT to compare the absolute increase in LVEF from baseline at 1 year between ablation and the best medical therapy in patients with persistent AF and HF (9). The AMICA trial did not reveal any benefit of AF ablation in patients with AF and advanced HF. These controversial results raised the issue that stratification for AF in HF patients remains challenging in clinical practice. Patients with HF and AF benefit the most from catheter ablation should be fully evaluated.

In this study, we carried out a retrospective study to evaluate predictors of LVEF recurrence after ablation for AF in systolic HF patients.

The protocol was reviewed and approved by the ethics committee of the First Affiliated Hospital of Dalian Medical University. Patients presenting with a documented episode of symptomatic AF and systolic HF (LVEF < 50%) were eligible for enrollment in the study. Potential clinical predictors were analyzed, including age, sex, type of AF, CHA2DS2-VASc score, complications, echocardiogram characteristics, and health history.

Paroxysmal AF: Self-terminating, in most cases within 48 h. Some AF paroxysms may continue for up to 7 days. AF episodes that are cardioverted within 7 days should be considered paroxysmal.

Persistent AF: AF that lasts longer than 7 days, including episodes terminated by cardioversion, either with drugs or by direct current cardioversion, after 7 days or more.

The indications for AF ablation procedures and periprocedural anticoagulation were in accordance with the current guidelines. Preprocedural left atrial CT was performed to evaluate the anatomy of the pulmonary veins. Immediately before the ablation procedure, the presence of a left atrial appendage thrombus was excluded with transesophageal echocardiography. In patients undergoing catheter ablation, circumferential PV isolation was mandatory as the primary method. Additional ablation techniques, including the creation of linear lesions, ablation of complex fractionated atrial electrograms, or combinations thereof, were left to the investigator’s discretion for a secondary ablative approach. The endpoint of the ablation strategy was complications of the PVI and/or additional lesions. Mapping was performed with the Carto 3D cardiac mapping system (CARTO, Biosense Webster, Inc., US).

For the whole 1-years follow-up (FU), all patients were monitored in the out-patient department of our institution. Oral anticoagulation was uninterrupted during the follow-up. A designated follow-up clinic completed the follow-ups. Patients had follow-ups in the postoperative months at 1, 3, 6, and 12 via clinic visit. ECG or 24-h Holter and echocardiograms were obtained at the clinic visit. Echocardiograms were centrally assessed at our echocardiography laboratory. LVEF assessment was originally intended to use contrast echocardiography at sinus rhythm. All patients underwent standardized, 2D non-contract transthoracic echocardiographic imaging. LVEF was determined according to the Simpson rule from left ventricular end-diastolic and end-systolic volumes in apical 5- and 2-chamber views. All causes of death and hospitalization were obtained at 12 months.

Baseline characteristics were summarized as means and SDs for continuous variables or frequency numbers and percentages for categorical variables. Differences between the two groups were estimated with 2-sample t-tests for continuous variables or chi-square analyses for categorical variables. Logistics proportional hazards models were used to adjust for differences in baseline characteristics or pertinent covariates on outcomes. We estimated univariable and multivariable models, hazard ratios (HRs), and their relative 95% CIs were derived. Covariates selected for multivariable models were based on significant variables in the univariable analyses and entered into models stepwise. The multivariate analysis and logistic regression were conducted to evaluate the predictors. A two-tailed P < 0.05 was considered significant. All statistical analyses were performed using IBM SPSS Statistics software version 24 (SPSS Inc., IBM, Somers, New York, USA).

Table 1. Characteristics of patients at baseline.

Recovery and Outcome of Heart Failure After Atrial Fibrillation Ablation

Figure 2. A receiver operating characteristic analysis revealed a moderate accuracy of predicting the improvement of left ventricular ejection fraction (LVEF) by E/E′ with a cut-off of 15 (sensitivity: 38.7%, specificity: 89.2%, area under the curve: 0.704).

Since the early landmark study on AF ablation in congestive HF by the Bordeaux group, several observational and randomized studies have provided substantial evidence that AF ablation in patients with HFrEF results in high rates of successful sinus rhythm maintenance along with significant clinical and LV functional improvements (5). In the PABACHF trial (6), 76% of patients in the AF ablation group significantly improved LVEF vs. 25% in the atrioventricular nodal ablation/biventricular pacing group. In the CAMERA-MRI study (7), where only patients with persistent AF and idiopathic cardiomyopathy were included, 58% of patients had normalization of LVEF after AF ablation, compared with 9% of patients receiving medical rate control only. In our cohort of 156 consecutive cases, 72% of patients had recovered LVEF after AF ablation.

The most recently published larger prospective RCTs have evaluated the role and efficacy of AF ablation in selected patients with HFrEF. AF ablation was associated with a greater reduction in all-cause mortality and HF hospitalizations. In our study, recovered LVEF was associated with a 39% reduction in HF hospitalizations [23 vs. 63%; 2.09 (1.40–3.12), P < 0.001] compared to non-recovered LVEF. No deaths occurred in the study due to the small sample size and short follow-up. However, considering all RCTs together, it remains unanswered which AF ablation strategy is optimal and recommended to achieve the reported favorable outcomes. We compared the ablation strategy between the groups, and there was no difference in AF ablation for LVEF recovery. Advanced structural remodeling or non-convertible AF in HF patients following PVI (11) and additional ablation are often needed. Whether empirical linear lesions (12), targeted non-PV trigger ablation (13), ablation of complex fractionated atrial electrograms (CFAE) (14), or substrate (low voltage) modification (15) ensure superior success is a controversial matter of opinion, and comparison of the different ablation strategies in patients with HF lacks evidence.

It should be considered in selected AF patients with HFrEF to improve survival and reduce HF hospitalization (IIa) following the 2020 ESC guidelines (16). We are aware that not every patient will benefit from an approach to ablation-based rhythm control. Thus, careful patient selection for AF ablation is key to achieving similar outcome benefits and should currently be geared to HF populations. Few studies have identified important factors that may be independent predictors of recovered LVEF after AF ablation (3). Ukita et al. (17) found that left ventricular end-diastolic dimension <53 mm might be an independent predictor of LVEF improvement after catheter ablation of persistent AF in HFrEF patients. In an academic review performed by Richter et al. (3), clinical guidance was proposed for the choice of treatment for AF in patients with HF, including ages <65, idiopathic cardiomyopathy, and LV diameter <55 mm. Studies suggest that a higher ventricular rate may be associated with an increased risk of HF in AF patients. However, in one study (18), among 50 patients with AF and HF who underwent AF ablation, only 15 (22%) had heart rate >100 beats per minute at baseline. However, LVEF normalized in 36 patients (72%) at 6 months post-ablation, suggesting that HF may develop in patients with no tachycardia.

We found that E/E′ is a new independent predictor of recovered ejection fraction in patients with systolic HF undergoing ablation for AF. Scarce data are available regarding the role and predictive value of E/E′ on the recovered ejection fraction. Our results suggested that E/E′ < 15 predicted an LVEF increase after AF ablation in patients with HF. E/E′ is the ratio between early mitral inflow velocity and mitral annular early diastolic velocity, which has become central in the guidelines for diastolic evaluation. The use of E/E’ is generally the most feasible and among the most reproducible method for estimation of filling pressure. Several prominent validation studies have confirmed the correlation of this ratio with filling pressure, and the prediction of normal and abnormal filling pressure is most reliable when the ratio is <8 or >15 (19). Diastolic dysfunction is often associated with irreversible ventricular remodeling and poor outcomes (20). Higher E/E′ predicted more myocardial fibrosis (21), in addition to poor outcome after AF in HF. Patients with impaired diastolic and systolic functions suggest that cardiac reserve function is lost. Even if arrhythmias such as AF are corrected, cardiac function may not be restored. Concomitant systolic and diastolic dysfunction in patients with HF and AF may be a specialized form of cardiomyopathy and needs to be further assessed.

The major limitation of our registry is that it represents a single-center experience and the population size was underpowered. The follow-up TTE was performed at various times, which might have underestimated the improvement in LVEF. The “true” predictors of LVEF recovery were unclear. Further factors, such as genetics, atrial cardiomyopathy, tachycardiomyopathy, need to be studied. Our research is a retrospective study, and bias exists, such as patient selection, ablation strategy, etc.

Left ventricle ejection fraction (LVEF) recovery occurred in 72.3% of patients, which was associated with a 39% reduction in all-cause hospitalization compared to the non-recovered LVEFs in our cohort. The only independent predictor of recovered LVEF was E/E′ < 15 in our series.

The studies involving human participants were reviewed and approved by Ethics Committee of First Affiliated Hospital of Dalian Medical University. The patients/participants provided their written informed consent to participate in this study.