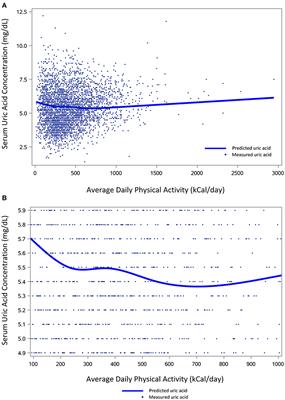 Gout is a crystal-induced inflammatory arthritis caused by excess uric acid. Both gout and elevated serum uric acid (SUA) concentrations are associated with metabolic syndrome, a disorder characterized by central obesity, dyslipidemia, hypertension, and glucose intolerance (Tsouli et al., 2006). In the United States (US), the prevalence of metabolic syndrome is significantly higher in patients with gout (63%) than in the general population (25%) (Choi et al., 2007). Moreover, both elevated SUA concentrations and metabolic syndrome are associated with hyperinsulinemia, which may lead to decreased renal excretion of uric acid (Quiñones Galvan et al., 1995; Perez-Ruiz et al., 2015; Toyoki et al., 2017).

A cross-sectional study was conducted using data from the 2003–2004 National Health and Nutrition Examination Survey (NHANES). NHANES refers to a series of cross-sectional studies examining the health and nutritional status of adults and children in the US. The 2003–2004 NHANES study population (N = 12,761) was selected using a stratified, multistage probability sampling design and included a representative sample of the noninstitutionalized US civilian population with certain oversampled populations (adolescents, patients ≥60 years old, African-Americans, and Mexican-Americans) (Centers for Disease Control Prevention, 2005). Our study included ambulatory participants ≥20 years-old with reported SUA concentrations who also participated in the accelerometry portion of NHANES 2003–2004 (n = 3,475).

Demographic data including age, sex, and race/ethnicity were self-reported by participants and were assessed at the time the survey was administered. Gout status was not assessed as part of the NHANES 2003–2004 survey, but the use of urate-lowering medications (i.e., allopurinol and probenecid) during the previous 1 month was obtained by research personnel during the household interview. Allopurinol use and probenecid use were included in our adjusted analysis as categorical variables (yes/no). Per NHANES survey criteria, alcohol use was also defined categorically (yes/no) based on whether survey participants reported ≥12 drinks in the past 1 year. Body mass index (BMI) was calculated using the height and weight obtained by physical exam and was evaluated as a continuous variable. Blood samples were collected at mobile examination centers, and our study included SUA concentrations and renal function, assessed by serum creatinine (mg/dL). These values were evaluated as continuous variables and were measured using a Beckman Synchron LX20 chemistry analyzer as part of a standard biochemistry profile.

Following the initial evaluation described above, physical activity was assessed with seven days of accelerometry. Participants were instructed to wear an Actigraph accelerometer (model 7164) during all waking hours of the day, except while bathing or swimming. The device was attached to their right hip by an elastic belt. The device recorded vertical acceleration as “counts,” which correspond to intensity of physical activity. The device was checked using an ActiGraph calibrator, and data were recorded in 1-min epochs. Non-wear time was defined as 20 or more consecutive minutes of zero counts; non-wear time was excluded from the analysis. To prevent aberrantly high activity measures, days where recorded activity was >40,000 kilocalories (kCal) were also excluded. A day was considered valid when data were available for at least 12 h in a 24-h period, and the final dataset included only those participants with at least four valid days (>12 h/24-h period) of wear time.

Adjusting for the complex sampling design employed by the NHANES 2003–2004 survey, multivariable regression was used to evaluate the relation of objectively-measured physical activity using accelerometer data and SUA concentrations. We initially assessed a bivariate model to directly compare the relation of physical activity and SUA concentrations. This model was subsequently adjusted for age, sex, race/ethnicity, alcohol use, BMI, serum creatinine, and the use of urate-lowering medications. The relationship between physical activity and SUA was assumed to have both linear and non-linear components. Restricted cubic splines (Harrell, 2015) were initially employed to investigate the functional form of the non-linear component, with follow-up inspection of the resulting plots to assess if a simpler parameterization (e.g., higher order polynomials, linear splines) would be revealed. The final model would be composed of all covariates, and both a linear and a non-linear component–the later suggested by the prior step. Secondary analyses were also performed to assess possible interactions between physical activity and sex, and physical activity and BMI (≤ 25 or >25 kg/m2). All p-values were two-sided, and p < 0.05 was considered to be significant for all tests. All statistical analyses were conducted using SAS software (V.9.3, SAS Institute, Cary, NC, USA).

The characteristics of the study population are summarized in Table 1. The median [interquartile range (IQR)] SUA concentration among participants was 5.22 (4.31–6.21) mg/dL, and 0.65% of participants reported using urate-lowering medications during the previous month. The median (IQR) energy expenditure from physical activity was 403 (262–604) kCal/day.

Physical activity, reported as energy expenditure in kCal/day, was significantly associated with SUA concentrations in our initial bivariate model (p < 0.01), and follow-up analyses with restricted cubic splines identified a non-linear component to the relationship. After controlling for age, sex, race/ethnicity, alcohol use, BMI, renal function, and the use of urate-lowering therapy, the graphical appearance of the adjusted model suggested a V-shaped relationship between physical activity and SUA concentration (Figures 1A,B), with an asymptote at ~700 kCal/day. Thus, the relationship was modeled using linear splines.

When the linear and spline terms were included in the controlled model, the results indicated a negative correlation (β = −0.00046, p = 0.07) between units of physical activity (i.e., 1 kCal/day) and SUA from 0 to 703 kCal/day and a positive correlation (β = 0.00038, p < 0.01) above 703 kCal/day. Using mean values for our covariates, predicted SUA concentrations were as high as 5.84 mg/dL among individuals with minimal activity levels, and the SUA nadir of 5.37 mg/dL was noted to occur at 703 kCal/day of physical activity. The difference between the corresponding slope from 0 to 703 kCal/day and the slope >703 kCal/day was statistically significant (p < 0.01).

In addition to physical activity levels, age, sex, race/ethnicity, BMI, renal function, and use of allopurinol (but not probenecid) were all significantly related to SUA concentrations (p < 0.05 for all covariates). There was no significant interaction between the physical activity term and sex or BMI (≤ 25 or >25 kg/m2) in relation to SUA concentrations in our secondary analyses.

Though we cannot determine causality in our cross-sectional study, we hypothesize that the reduced SUA concentrations observed with physical activity may be related to changes in insulin sensitivity. Physical activity reduces insulin resistance and decreases fasting insulin levels, particularly in individuals who engage in regular moderate aerobic exercise (Houmard et al., 2004). Favorable insulin changes related to physical activity may increase renal uric acid excretion (Quiñones Galvan et al., 1995; Perez-Ruiz et al., 2015; Toyoki et al., 2017), resulting in reduced SUA concentrations, and these observations may be highly relevant for patients with hyperuricemia. While further prospective studies are needed to confirm our findings in patients with gout, physical activity not only has the potential to reduce SUA concentrations but may also help prevent cardiovascular disease in this high-risk population (Camhi et al., 2011; Fiuza-Luces et al., 2018).

Through our previous work in patients with pre-diabetes, we have found that moderate intensity aerobic exercise training produces superior improvements in insulin sensitivity compared to vigorous intensity activities (Slentz et al., 2016), and this may be one potential reason why an attenuated SUA effect was observed for participants averaging >703 kCal/day. Other possible explanations for the attenuated effect of higher levels of physical activity on SUA concentrations include dietary considerations (higher purine intake or fructose-sweetened beverage consumption) (Hak and Choi, 2008), increased uric acid release from muscle damage and protein catabolism (Hammouda et al., 2012; Jamurtas et al., 2018), and competitive inhibition of uric acid excretion due to increased lactic acid production (1967;Neumayr et al., 2003).

The strengths of our study are the large, nationally representative population provided by the NHANES dataset and the use of accelerometry data to objectively measure physical activity. We also recognize a number of limitations primarily related to the cross-sectional nature of this study. Although participants wore accelerometers for 1 week, in the absence of an intervention, this provides only a cross-sectional assessment of regular physical activity. Thus, we were unable to determine causality and the mechanism(s) of the observed associations. Also, only one SUA measurement was performed, and this occurred prior to the objective physical activity assessment period. Because SUA exhibits biological variability, additional assessments of SUA would have improved SUA accuracy. A gout diagnosis was not included in the list of medical conditions captured in the 2003–2004 NHANES questionnaire, and all patient sociodemographic and medication information was self-reported.

The datasets analyzed for this study can be found in the 2003–2004 National Health and Nutrition Examination Survey (NHANES) at https://wwwn.cdc.gov/nchs/nhanes/continuousnhanes/default.aspx?BeginYear=2003. Further inquiries can be directed to the corresponding author.

The NHANES 1999–2004 study involving human participants was reviewed and approved by the NCHS Research Ethics Review Board (protocol #98-12 for NHANES 1999–2004). The participants provided their written informed consent to participate in the NHANES study. As the present analysis only uses de-identified data from the NHANES 2003–2004 dataset, the current study was designated as exempt human-subjects research and was approved by the Institutional Review Board of Duke University Hospital (IRB Pro00030650).

We would like to thank the Claude D. Pepper, Older Americans Independence Center (5P30AG028716-15) and the Duke University School of Medicine Division of Rheumatology and Immunology for supporting this research.