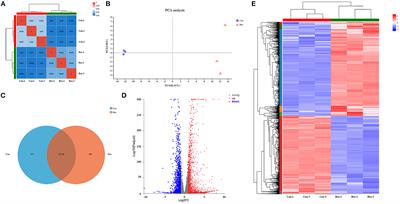 Antibiotic feed additives are gradually being phased out in livestock production worldwide. There is an urgent need to develop novel antibiotic alternatives to ensure the health of livestock animals, and improving animal innate immunity through feed additives is one possible strategy to achieve this (1, 2). Natural products that have anti-inflammatory, anti-oxidative, and antibacterial effects have shown promising potential for health promotion and disease prevention (3). These are less likely to trigger bacterial resistance, and therefore are preferred as feed additives and potential antibiotic alternatives. Approximately 49% of the drugs approved by the U.S. Food and Drug Administration since the 1940s are natural products or their derivatives (4). Thus, the development of natural, active, classified green feed additives in the context of anti-resistance has broad application prospects.

Deoxyshikonin, an active component of Lithospermum erythrorhizon, is a promising drug candidate for the treatment of wounds and cancers (5, 6). In a screening of a library of 1,261 natural compounds using a newly established IPEC-J2/pBD3-luc cell line, we previously found that deoxyshikonin induces the expression of porcine host defense peptides (HDPs) (7). In addition, deoxyshikonin had a minimal effect on the expression of several representative inflammatory cytokine genes and obviously enhanced the antibacterial activity of 3D4/31 macrophages against both gram-negative and gram-positive bacteria. However, the underlying mechanism and biological functions of deoxyshikonin in porcine cells remained to be unraveled. Moreover, whether deoxyshikonin has a preventative effect on infectious diseases in animals requires further investigation. Therefore, in this study, we profiled deoxyshikonin-induced gene expression in porcine epithelial cells by RNA-sequencing (RNA-seq) with the aim to provide valuable clues for the in-depth study of deoxyshikonin.

Treatment of Cells With Deoxyshikonin

IPEC-J2 cells were seeded in six-well tissue-culture plates (Costar, Corning Inc., Corning, NY, USA) at 2.5 × 105 cells/well. After overnight culture, the cells were treated with deoxyshikonin in triplicate at 5 μmol/L for 6 h. Non-treated cells served as a control. After incubation, the cells were washed with PBS three times and collected for further assays.

The raw, paired-end reads were trimmed and quality-controlled using SeqPrep (https://github.com/jstjohn/SeqPrep) and Sickle (https://github.com/najoshi/sickle) with default parameter settings. The clean reads were aligned to the pig reference genome Sscrofa11 (http://asia.ensembl.org/Sus_scrofa/Info/Index) using TopHat v2.1.1 (http://ccb.jhu.edu/software/tophat/index.shtml) (8). For each sample, the mapped reads were assembled into transcripts using StringTie (https://ccb.jhu.edu/software/stringtie/) (9). Genes were annotated by BLAST searches against the Clusters of Orthologous Groups (COG), Gene Ontology (GO), and Kyoto Encyclopedia of Genes and Genomes (KEGG) databases.

The raw transcriptome data have been deposited in the NCBI Gene Expression Omnibus (GEO) database under accession no. GSE174377.

A sequencing saturation curve revealed that most genes with medium to high expression (FPKM > 3.5) were nearly saturated (ordinate tending to 1) at 40% of the mapped reads, which indicated that most expressed genes were covered (Supplementary Table 3, Supplementary Figure 1). Spearman’s correlation matrix analysis showed that the correlation indices of the mapped genes were obviously different between the two treatments, whereas within-treatment differences were small, indicating a high consistency of measurements within each group and high reproducibility of the sequencing data (Figure 1A). In principal component analysis (PCA), principal components PC1 and PC2 explained 82.51 and 5.90%, respectively, of the distribution in the groups (Figure 1B). Deoxyshikonin-treated samples clustered together and were clearly separated from the control samples, suggesting that deoxyshikonin treatment substantially affected overall gene expression.

Figure 1. Correlation analysis and principal component analysis (PCA) of samples and identification of deoxyshikonin-unique genes and differentially expressed genes (DEGs). (A) Hierarchical clustering heatmap of the six samples using the Spearman method. R2 values represent the correlation between the expression profiles among the samples are presented in bold. (B) PCA plot of the samples. Each point represents one sample. Percentages are contribution ratios. (C) Venn diagram of referenced genes shared between the control and deoxyshikonin treatment groups. (D) Volcano plot of DEGs between the control and deoxyshikonin treatment groups. The X-axis represents the fold change of expression of DEGs and the Y-axis represents the statistical significance of the fold change. Red dots represent significantly upregulated DEGs, blue dots represent significantly downregulated genes, gray dots represent insignificant DEGs. (E) Clustering heatmap of the DEGs. The log2FC of gene abundance is indicated. Red and blue indicate high and low expression, respectively.

Another noteworthy result is the upregulation of genes encoding heat shock proteins (HSPs) by deoxyshikonin. Eleven Hsp40 genes, 9 Hsp70 genes, and a few other high-molecular HSP genes were significantly induced after deoxyshikonin treatment. None of the HSPs was downregulated. HSPs are not only involved in protein folding and degradation as molecular chaperones, but also play potential roles in the innate immune system, resulting in resistance to pathogenic and viral infections (18). In particular, HSP70s have been demonstrated to be involved in the activation of several immune pathways (19). Shikonin has been demonstrated to induce HSP70, thus playing a cytoprotective role, in human lymphoma U937 cells (20). It will be interesting to study whether deoxyshikonin exerts its immune-regulatory functions or cytoprotective effects by activating HSPs.

Based on GO analysis, 2,745 genes among the 3,071 referenced DEGs were categorized into three principal GO terms of level 2 (Supplementary Figure 3A): molecular function (2,303 genes, 15 GO terms), cellular component (2,455 genes, 17 GO terms), and biological process (2,358 genes, 23 GO terms). The term “cell part” had the highest number of annotated DEGs (2,178 genes), followed by “cellular process” (1,920 genes) and “binding” (1,761 genes). The top 20 ranked GO terms of the DEGs are shown in Supplementary Figure 3B. The term “cellular response to topologically incorrect protein” under “biological process” was the most strongly enriched in DEGs. Twenty-one immune response-related GO terms were enriched in DEGs with P < 0.05, but adjusted P > 0.05. Among the top 20 ranked GO terms, “regulation of cell cycle phase transition” (73 genes) contained the most DEGs, followed by “cell division” (62 genes) and “negative regulation of cell cycle process” (58 genes).

KEGG enrichment analysis was conducted to identify DEGs in each signaling pathway. The DEGs were mostly enriched in “cell cycle,” “p53 signaling pathway,” and “proteasome,” whereas “pathways in cancer” and “MAPK signaling pathway” had the highest numbers of DEGs in the top 20 ranked pathways. The upregulated DEGs were mainly involved in “protein processing in endoplasmic reticulum,” “neuroactive ligand-receptor interaction,” and “MAPK signaling pathway,” which had the highest number of DEGs (Figure 2C). The downregulated DEGs were mainly involved in “cell cycle,” followed by “cellular senescence” and “microRNAs in cancer” (Figure 2D). DEGs mapped to enriched KEGG pathways are shown in Figure 2H.

Several immune response-related KEGG pathways were significantly enriched in DEGs. The MAPK pathway is a crucial signaling pathway that regulates the host innate immune response to infection and plays an important role in regulating pro-inflammatory and anti-inflammatory cytokines and chemokines (21). Thirty-five upregulated and 23 downregulated DEGs were assigned to the MAPK signaling pathway (adjusted P = 4.37E−2; Figure 2E). MAPK10, MAPK8, and MAP3K8 were significantly increased in expression, whereas gene expression of MAP3K6, MAPK8IP1, MAPK3, MAP4K2, and MAP2K6 was decreased. Several downstream transcription factor-related genes, such as RELB and DDIT3, were also induced by deoxyshikonin. The MAPK pathway is vital in the induction of defensin and cathelicidin expression by nutrients (1).

Tumor protein p53, a key tumor suppressor, is also involved in many other biological processes, including immune responses (22). The role of p53 in innate immune system regulation has been demonstrated (23). Activated p53 repressed human beta defensin 3 (hBD3) in primary oral keratinocytes and CaSki cells, whereas a reduction in cellular levels of p53 stimulated hBD3 expression (24). In the present study, TP53 expression was significantly suppressed (log2FC = −1.05) by deoxyshikonin treatment, indicating the potential role of p53 in the regulation of porcine HDPs. Twenty-four DEGs were assigned to the p53 signaling pathway (adjusted P = 1.63E−3; Figure 2F), mainly including cell cycle-associated and apoptosis-related genes, suggesting a regulatory effect of deoxyshikonin on the p53 pathway.

JW conceived the study and prepared the manuscript. WZ and XC performed the experiments. SW and YW performed the RNA extraction. WZ and HJ performed data analysis. All authors contributed to the article and approved the submitted version.

The Supplementary Material for this article can be found online at: https://www.frontiersin.org/articles/10.3389/fvets.2021.711721/full#supplementary-material

Supplementary Figure 2. Functional annotation analysis of deoxyshikonin-unique genes based on the Clusters of Orthologous Groups (COG) (A), Gene Ontology (GO) (B), and Kyoto Encyclopedia of Genes and Genomes (KEGG) (C) databases.