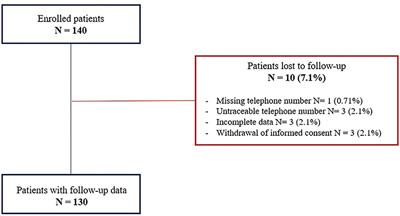 The leadless pacemaker (LLPM) is a miniaturized, self-contained cardiac pacemaker that emerged as a meaningful alternative to a transvenous pacemaker for single-ventricular pacing in patients at high-infectious risk or with upper limbs venous occlusion or anatomical constraints (1). Permanent atrial fibrillation (AF) with a slow ventricular rate is the most common indication for single chamber LLPM (2); however, nearly one-third of patients selected to receive this therapy were for indications not associated with AF (3). The outcome of LLPM in the real-world setting was associated with a low risk of complications and good electrical performance up to 1 year after implantation compared to a transvenous pacemaker (4). Actually, there are a few data about the clinical performance of LLPM in patients with pacing indication not associated with AF (3) and no data are still available in a real-world setting. The aim of this study was to compare the safety and effectiveness of single-chamber LLPM among patients with or without AF as a pacing indication in a real-world setting.

The Campania Leadless Registry is an observational real-world multicenter registry that included all the consecutive patients who underwent LLPM implantation from July 2017 to December 2020 at three tertiary referral hospitals in Campania Region—Italy (Monaldi Hospital of Naples, University of Campania “Luigi Vanvitelli” of Naples and Umberto I Hospital of Nocera Inferiore). All the patients received Micra transcatheter pacemaker system (Medtronic, Minneapolis, Minnesota, USA) because it was the only available LLPM in Italy at the time of this study. All the procedures were performed by expert electrophysiologists who were trained at a special training laboratory with a hands-on simulator. At implantation, anthropometric, anamnestic, clinical, and intraoperative pacemaker parameters were collected. At each follow-up visit, performed at 1- and 4-weeks post-implantation and every 6 months thereafter, clinical status, pacemaker electric parameters, the occurrence of syncope, cardiac hospitalization, pacemaker syndrome, and survival were assessed. In case of missed follow-up, the patient was contacted by phone; after two unsuccessful phone contact attempts, information on the life status of the patients was collected from the regional healthcare information platform. Informed consent was obtained from all the participants before inclusion in the database. The database and this analysis were approved by the local institutional review committee (ID: 120717).

The outcomes of interest were the LLPM intraoperative data, the perioperative complications, the occurrence of syncope, cardiac hospitalization, pacemaker syndrome, and all-cause death. The implant duration was defined as the time between the femoral vein cannulation and decannulation after implantation of LLPM. The perioperative complications were defined as adverse events that occurred intraoperatively or within 30 days post-operatively. The occurrence of syncope was based on self-reported data. The cardiac hospitalization and all-cause mortality were collected from the regional healthcare information platform. The pacemaker syndrome was defined as the development of either congestive signs or symptoms associated with retrograde conduction during single-chamber pacing or a ≥20 mm Hg reduction of the systolic blood pressure, associated with reproducible symptoms of weakness, lightheadedness, or syncope.

Categorical data were expressed as number and percentage, while continuous variables either as a median and interquartile range (IQR) or mean and SD based on their distribution assessed both by the Kolmogorov–Smirnov and the Shapiro–Wilk tests. Between the group differences, for categorical variables, were assessed by the chi-squared test, as the sample size was > 50 subjects, with the application of Yates correction where appropriate. Either the parametric Student’s t-test or the non-parametric Mann–Whitney U test and Wilcoxon signed-rank test were instead used to compare continuous variables, according to their distribution. The Kaplan–Meier analysis was further performed to assess the risk of combined endpoints (syncope, cardiac hospitalization, and mortality) between the two subgroups. A two-sided probability p < 0.05 was considered statistically significant. All the analyses were performed using the SPSS statistical software (version 24.0, SPSS Chicago, Illinois, USA) and the STATA 14.0 software (StataCorp LLP, College Station, Texas, USA).

All the patients underwent a successful implantation procedure according to the standard technique (1). The mean procedure duration time was 45.21 ± 18.59 min and the mean fluoroscopy time was 9.05 ± 6.23 min. The non-AF group showed a slightly longer procedure time compared with the AF group (49.24 ± 21.56 vs. 43.10 ± 13.23; p = 0.046). No differences in LLPM electrical parameters were reported between the two groups (Table 2). A total of 7 patients (5%) experienced perioperative complications with no differences between the two groups (Table 3). No procedure-related complications led to perioperative death.

Figure 1. Study of the flowchart.

The results of our multicenter registry showed that more than half of patients with LLPM had a pacing indication not associated with permanent AF. Moreover, there was no difference in LLPM procedure-related complications, when stratified according to the primary pacing indication (AF vs. non-AF); non-AF patients who received LLPM were more likely on dialysis or following infectious leads extraction; no significant difference in syncope recurrence, cardiac hospitalization, and all-cause mortality was shown between the two groups during the follow-up.

Recently, we observed a gradual small increase in single-chamber LLPM implantation rate in patients who do not need resynchronization therapy, more likely in those presenting with AF or a high-anticipated risk of infection (5). This tendency might be explained by the fewer major complications at 1-year follow-up compared with patients with transvenous systems, mainly attributed to a lack of dislodgement and a lower rate of system revision (6, 7).

Regarding the pacing indication, 53% of our study population received single-chamber LLPM for sick sinus syndrome or AVB; the extensive use of LLPM in our clinical practice might be related to the high prevalence of risk factors for the cardiac implantable electronic device (CIED) infection among our population, such as diabetes, chronic kidney disease, malignancy, systemic anticoagulation, and prior CIED infection (9, 10).

In this study, no significant difference in syncope events, cardiac hospitalizations, and all-cause mortality have been shown between LLPM patients with and without AF as primary pacing indication, despite the non-AF group showing a higher percentage of ventricular pacing.

Our real-world data confirm the evidence by Piccini et al. (3) which showed no significant difference in a composite outcome including heart failure, pacemaker syndrome, and syncope events between patients with and without AF indication or history in the IDE trial. Our findings suggest the hypothesis that, in the absence of technical issues, the LLPM could be considered a safe and reasonable treatment in patients without AF in need of cardiac pacing. This approach may constitute an option in the selected clinical settings (e.g., high risk, infectious lead extractions, etc.) in order to avoid the risks of de-novo dual chambers pacemaker implantation. The LLPM with automated, enhanced accelerometer-based algorithms (15) that provide atrioventricular synchronous pacing should be used for longer follow-up studies, in order to fully understand the potential clinical value of this strategy. Actually, the use of LLPM is still considerably limited by reimbursement issues and the availability of the device in many European countries.

Our findings might be affected by several biases. The retrospective design and the non-randomized comparison between the groups limit the strength of our results. Moreover, the small cohort size, the differences in the baseline clinical characteristics between the groups, and the limited length of follow-up limits represent the additional limitations.

More than half of the patients who underwent LLPM in a real-world setting had a pacing indication not associated with permanent AF; this subgroup did not show significant differences in intraoperative major complications and terms of syncope recurrence, cardiac hospitalization, and all-cause mortality compared to those with AF. Our results suggest that LLPM may be considered a safe and reasonable treatment in patients without AF in need of pacing. Further studies are necessary to confirm our preliminary results.

The studies involving human participants were reviewed and approved by Monaldi Hospital. The patients/participants provided their written informed consent to participate in this study.