The Superficial Anastomosing Veins of the Human Brain Cortex: A Microneurosurgical Anatomical Study 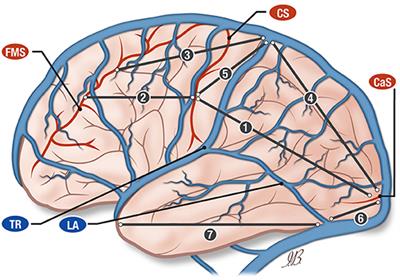 Venous structures, especially large superficial and bridging veins, can significantly hamper neurosurgeons during the operative course. To minimize the risk of venous complications (1–10), precise knowledge of the cerebral vascular topography is critical. In this microneurosurgical and anatomical study, we characterized the superficial anastomosing veins of the human brain cortex in human specimens (11).

We used brain preparations fixed in formalin (5%) with no pathological changes from the autopsy units of the Munich Anatomical Institute and the Pathological Institute of the Ludwig Maximilian University of Munich. Proper storage and examination of the brains were carried out in the laboratory for neurosurgical microanatomy in the Großhadern Hospital. The pachimeninges (dura mater) had been removed from all specimens. After a detailed optical inspection, the superficial veins were dissected out of the arachnoid using a surgical microscope (OPMI; Zeiss, Oberkochen, Germany); their natural course was preserved. Particular attention was paid to the confluence into other vessels.

We selected the following anatomical structures as references for measuring the junction points of the superficial veins: central sulcus, frontomarginal sulcus, calcarine sulcus, and temporal pole. The selection was based on the following criteria: easy identification on the specimen, relative interindividual consistency of the structure, intraoperative applicability, favorable characteristics on imaging.

We used Microsoft Excel® for the statistical analysis. We calculated the mean, standard deviation, minimum and maximum distances for all the measurements.

The age and gender of the patients when the brains were removed were as following: nine females and 12 males, with an average age of 71 ± 11 years (range 51–88 years).

Table 1. New classification of the large anastomosing veins the vein of Trolard, the vein of Labbé, and the Sylvian venous system.

Confluence of the Vein of Trolard Into the Superior Sagittal Sinus

The average of the distances between the central sulcus midpoint and the superior sagittal sinus confluence was 0.6 cm (±2.6 SD) and 1.31 cm (±3.01 SD) for the right and the left side, respectively (Figure 1, line 5).

Confluence of the Vein of Labbé Into the Transverse Sinus

We measured the distances between the confluence of the vein of Labbé into the transverse sinus and the calcarine sulcus, which resulted in the following distribution: an average of 7.2 cm (± 0.9 SD) and 7.0 cm (± 1.3 SD) on the right and on the left side, respectively (Figure 1, line 6).

Calculating the distances between the confluence of the vein of Labbé into the transverse sinus and the temporal pole, we obtained an average of 9.9 cm (± 0.7 SD) and 9.7 cm (± 1.3 SD) for the right and the left side respectively (Figure 1, line 7).

The schematic representation of these measurements is showing in the Figure 1.

The study of the cerebral venous system, including ascending frontal veins and bridging veins, and especially the anastomotic veins, Trolard and Labbé, and the Sylvian vein, has received little attention in neurosurgery. Among the superficial veins of the cerebrum, the superior anastomotic vein (vein of Trolard), the inferior anastomotic vein (vein of Labbé), and the Sylvian veins are most at risk of occlusion since they are located along the access routes to most intracranial pathologies (2, 12). The presence of adequate anastomoses can keep venous pressure low and mitigate or even prevent the destructive effects of an occlusion (13–19).

Regarding the presence of the veins of Trolard and Labbé, there were no significant differences between the left and the right side in the present study. Due to the lack of data on handedness, no reliable assignment to hemispheric dominance was possible. If one postulates the left hemisphere as the dominant one, there appears to be a preference for both the vein of Trolard and the vein of Labbé on that side. Such relationship did not appear in studies by either Di Chiro (20) or von Lanz (21).

In his book (21), von Lanz described the superior anastomotic vein in the area of the central sulcus or slightly dorsal to it, noting that a course toward the anterior pole of the frontal lobe can also occur. We were able to differentiate this more precisely, describing the localization of the vein of Trolard in relation to the central sulcus. When viewed from both sides, the comparison between left and right showed no significant difference, the vein of Trolard was in front of the central sulcus in 8 hemispheres and in only four cases behind it. A confluence with the central sulcus was recorded in 6 cases. When measuring the distance of the contact point with the superior sagittal sinus, it appears that the frontal span of this location is significantly larger at 6 and 5 cm on the right and left, respectively.

Stephens and Stilwell (22) outlined the veins flowing into the superior sagittal sinus into a frontal and parietal group, with no information regarding frequency and exact position. However, they note that the vein of Trolard is the most variable of all superficial veins. According to Stephens and Stilwell (22), our data show a greater variability of the vein of Trolard than the vein Labbé when the veins flow into the superior sagittal sinus or the transverse sinus.

Thus far, there is no clear information in the literature regarding the confluence of the vein of Labbé into the transverse sinus. A sketch in Seeger’s book Atlas of Topographical Anatomy of the Brain and Surrounding Structures (23) shows this region, and the confluence is 10.5 cm from the temporal pole. In our measurements, we had an average of 9.9 (± 0.9) cm for the right hemisphere and 9.7 (± 1.3) cm for the left (Figure 1, line 6).

The location of the confluence of the vein of Labbé into the transverse sinus, either via the tentorium or direct, is of great importance for the planning of subtemporal and occipito-basal approaches. Like the confluence angles of the bridging veins of the cortical convexity in the direction of the superior sagittal sinus, the vein of Labbé forms a very acute angle with the temporal base or with the occipito-basal tentorium. Within this acute angle, the surgeon need to pay attention moving toward the confluence of the Vein of Labbé: if the spatula retraction is forced too much, the compression may induce venous stasis.

A New Classification of the Large Anastomosing Veins

Figure 2. Classification for the superficial anastomosing vein patterns (according to Erös et al.) in the current study.

Stephens and Stilwell (22) describe significant end-to-end anastomoses between superficial veins but do not propose any precise typing. They describe that the connection of the veins of Trolard and Labbé with the Sylvian veins is already present in the fetus; these connections remain during life, but the diameter of these vessels’ middle segments increases.

In the present study we performed a systematic description and a numerical distribution of the superior anastomotic vein (vein of Trolard) and inferior anastomotic vein (vein of Labbé) for the first time. Furthermore, we proposed a new classification of the large anastomotic veins, describing five types of possible venous distributions for the vein of Trolard, the vein of Labbé, and the Sylvian venous system. The first four types reflect the classification proposed by Oka et al. (24), but a fifth type, a new anatomical pattern in the variability of the superficial vein distribution, was added.

Limitation of the Study

The limitations of the study regarding the measurements are related to the use of formalin for the specimen’s fixation, that could cause shrinkage of the brain, and similarly to the physiologic brain atrophy which occur in older people.

Although changes in size of the brain stem can occur. as a result of formalin fixation, changes in the cerebrum are usually smaller (25).

Therefore, these aspects do not impact or influence the main topic of the research, consisting in a new classification of the large anastomotic veins proposed in this work.

All authors listed have made a substantial, direct, and intellectual contribution to the work and approved it for publication.

We thank Gabriella Patanè, MA, for her cooperation in the language revision process of this manuscript and for the support she provided in finalizing the paper for submission.