In Vitro Estimation of Tracheobronchial and Alveolar Doses Using Filters 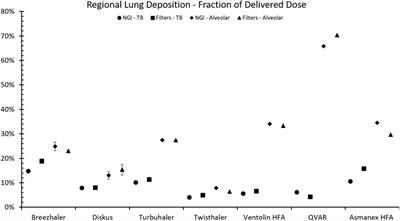 During development and evaluation of inhaled pharmaceutical aerosols, benchtop experiments that discriminate between the dose depositing in the extrathoracic region versus the dose delivered to the lungs are commonly used (e.g., Ciciliani et al., 2020; Miller et al., 2021). This is because different in vivo effects may be ascribed to aerosol deposition in these different regions. By a similar argument, in some cases it may also be useful to discriminate between the tracheobronchial versus alveolar components of the total lung dose. Until recently, the simplest in vitro procedure for separating the lung dose into its morphological components was to measure the aerosol size distribution, typically using multistage cascade impaction, and input this into a computer model that provides estimates of regional lung deposition for the given particle size distribution and chosen inhalation pattern (e.g., Ruzycki et al., 2020; Miller et al., 2021). This labor-intensive task is complicated by the need for a mixing inlet when using realistic breathing patterns. A recently developed, simpler and less laborious approach is described here that instead collects the aerosol downstream of an extrathoracic replica directly onto filters that separately mimic tracheobronchial versus alveolar deposition.

An essential component of the present approach is a filter that correctly captures the dependence of tracheobronchial deposition on particle size and flow rate. While extrathoracic replicas and absolute filters are readily available and routinely used, such is not the case for filters that capture tracheobronchial deposition. In particular, for inhaled pharmaceutical aerosols, the tracheobronchial region has much lower deposition efficiency than commercially available filters. Previous authors (Koehler and Volckens 2013) have used polyurethane foams and nylon meshes to mimic regional lung deposition curves of the ICRP model (1994). However, their apparatus was designed for use at a constant flow rate of 16.7 l/min, whereas inhalers are commonly tested at much higher, time varying flow rates. In addition, recovery of pharmaceutical ingredients from filters typically involves rinsing with organic solvents that can damage the organic filter media used by Koehler and Volckens (2013), besides interfering spectroscopically when assaying small quantities.

One solution to the above issues involves the design of custom stainless steel filter media. Aerosol filters present many small scale obstacles to a particle-containing air flow, often by having the air flow through a thin three-dimensional layer of fibers. The air flows around the fibers, while aerosol particles deposit on the fibers by one or more of the following mechanisms: impaction, interception, diffusion, sedimentation, electrostatics. Filter design involves choosing fiber diameters and fiber spacings to yield the desired filtration efficiency for flow rates, particle diameters and other parameters in the range of interest. This is normally done with the aid of single fiber filtration theory (Hinds 1999). However, in our case, we wish to mimic the filtration efficiency of the tracheobronchial region, which involves filter parameter values outside the range of existing single fiber theory equations (Tavernini et al., 2019). Thus, we instead used the computational fluid dynamics (CFD) package OpenFOAM (version 5.0, Bracknell, Berkshire, United Kingdom) to simulate the flow and particle motion through single layers of wire meshes. CFD was performed for particle diameters in the range of 0.5–10 μm, meshes with wire diameters of 20 and 28 μm with 30.5, 38.1, and 50.8 μm diameter openings, fluid velocities of 0.05–1.55 m/s, and a numerical grid of 1.9–3.2 million cells (see Tavernini et al., 2019 for further details). An empirical curve fit to the CFD results was then used to explore filtration efficiencies for multiple layers of wire meshes for a variety of filter designs. Predicted filtration was compared to average human tracheobronchial deposition given by various different authors (Stahlhofen et al., 1989; ICRP 1994; Javaheri et al., 2013; Asgharian et al., 2001). Using this approach, a two layer filter design with an upstream layer having 500 wires per inch and each wire having a diameter of 25 μm (i.e. 500 × 25 μm mesh), with the second layer consisting of 400 × 30 μm mesh was found to be optimal in mimicking deposition in the human tracheobronchial region for the parameter values noted above.

The above noted filter design was built and its filtration efficiency measured experimentally using the setup shown in Figure 1. These experiments involved supplying nebulized jojoba oil aerosols from a plenum and comparing the signals from an Electrical Low Pressure Impactor (ELPI) when exposed to the test aerosol with and without the filter element. The aerosol was inhaled across the filter with various unsteady tidal breathing patterns supplied by an ASL 5000 Breathing Simulator (IngMar Medical, Pittsburgh, PA, United States), as well as various constant flow rates supplied by a vacuum pump. Comparing the signal received from the ELPI with and without the filter element allowed determination of the filtration efficiency for each particle size bin of the ELPI.

Figure 2 shows measured filtration for the two layer stainless steel filter noted above, with both layers supplied by ASADA MESH Co. (Osaka, Japan), compared to that predicted by various theoretical deposition models for various breathing patterns. Data obtained at constant flow rates differed negligibly from the corresponding unsteady breathing patterns having the same average flow rate (Tavernini et al., 2019), indicating the filtration efficiencies were unaffected by unsteady flow rates, as was intended in their design. Good agreement is also seen between the measured filtration of the filter and the average tracheobronchial deposition values predicted by the various sources noted in Figure 2, particularly considering the large intersubject variability that is known to occur among the approximately 130 combined subjects of the in vivo scintigraphy studies used to validate the theoretical deposition models (Stahlhofen et al., 1989).

Having demonstrated the ability of the mesh filter to adequately mimic average tracheobronchial deposition with laboratory generated test aerosols, we proceeded to similarly examine its behavior with aerosols generated by various marketed inhalers. For this purpose, several additional considerations were necessary. First, when placing a filter immediately downstream of an extrathoracic replica, alterations to the filter intake flow path must be made to prevent the laryngeal jet from causing large differences in velocity at different locations across the face of the filter. Secondly, lumen diameters in the tracheobronchial region are typically more than a few millimeters, while the widths of the channels of the filter are less than 0.1 mm. Thus, the distance to an electrically conducting surface is many times lower for aerosol particles passing through the filter than in human conducting airways, which could artificially enhance electrostatic deposition on the filter in the case of sufficiently charged particles. Since electrostatic deposition is expected to be negligible in the human tracheobronchial region with pharmaceutical inhaler aerosols (Tavernini et al., 2021), a method for neutralizing the aerosol just prior to passing through the tracheobronchial filter is needed. Finally, large particles (e.g., 10 μm or larger in diameter) that occur in some dry powder inhaler formulations could bounce through the extrathoracic region and artificially increase the dose depositing on the tracheobronchial filter.

To address the above noted issues, a custom bipolar ion source was integrated with a liquid filled collection dish that served to both collect large particles and disrupt the laryngeal jet (Tavernini et al., 2021). The addition of electrostatic neutralization via a high voltage corona ionization source necessitated the use of an annular design for the filter region. Figure 3 shows the final design of the combined flow disruptor, large-particle collection dish and charge neutralizer apparatus. The voltage drop between the inner and outer electrodes was powered by 120 V AC, stepped up to 5 kV by a transformer, which produced an alternating bipolar corona discharge between the outer and inner electrodes. The collection dish was filled with a small amount of solvent to prevent particle bounce.

FIGURE 3. A schematic of the combined flow disruptor/large particle collection dish and aerosol neutralizer (left) is shown placed on its side and pulled apart from its downstream section that houses the tracheobronchial filter mimic (right). Reprinted from Tavernini et al. (2021) by permission from Springer Publishing.

The apparatus shown in Figure 3 was placed immediately downstream of an Alberta Idealized Throat (AIT). A final absolute filter downstream of the TB Filter housing collected an estimate for the alveolar dose. Four dry powder inhalers (Onbrez Breezhaler, indacaterol maleate, 97 μg; Flovent Diskus, fluticasone propionate, 250 μg; Pulmicort Turbuhaler, budesonide, 200 μg; Asmanex Twisthaler, mometasone furoate, 400 μg) were connected to the AIT and individual breathing patterns representative of those expected in vivo based on inhaler resistance (Delvadia et al., 2016) with each device were actuated by a custom-built breathing machine. Active pharmaceutical ingredient was rinsed from the AIT, the tracheobronchial filter, and alveolar filter and assayed by UV spectrophotometry. The same inhalers were also tested with the filters, flow disruptor and neutralizer instead replaced by a Next Generation Impactor (NGI). The particle size distribution measured by the NGI was then input into the regional lung deposition model of Javaheri et al. (2013) to predict tracheobronchial and alveolar doses to allow comparison to doses collected by the filters. Figure 4 shows the experimental setup for the two sets of measurements.

A similar set of experiments and calculations were performed with three metered dose inhalers (Ventolin HFA, salbutamol, 100 μg; QVAR, beclomethasone dipropionate, 80 μg; Asmanex HFA, mometasone furoate, 100 μg) with a constant inhalation flow rate of 30 l/min supplied by a vacuum pump, rather than the breathing machine shown in Figure 4. A constant flow rate was used with the pMDIs to avoid the need for robotic timing actuation equipment when a realistic breath pattern is used. In addition, for pMDI testing the inhalers were inserted into the extrathoracic replica with their mouthpieces horizontal (i.e. “transverse” rather the “coaxial” position shown in Figure 4 for the dry powder inhalers), since for high momentum pMDI aerosols Ruzycki et al. (2020) found the transverse position with the Alberta Idealized Throat improved agreement with in vivo extrathoracic deposition data.

FIGURE 5. Comparison of amounts predicted to deposit in the tracheobronchial (TB) and alveolar regions using NGI impactor data combined with in silico regional deposition modeling (Javaheri et al., 2013) versus values collected directly on filters for four different DPIs operated with realistic breath patterns plus three pMDIs operated at a constant flow rate of 30 l/min. Error bars indicate standard deviation (n = 5) and are shown only when they are larger than the datapoint symbols.

We have developed an alternative benchtop approach to estimating regional deposition in the human respiratory tract, whereby custom designed metal filters are used to estimate tracheobronchial deposition. An upstream extrathoracic replica captures deposition there, and a final downstream filter captures the dose to the alveolar region. Assaying drug in the three collection regions is considerably simpler and less labor intensive than using a cascade impactor, and does not require an in silico model to predict regional lung deposition. Furthermore, no mixing inlet is required when using realistic breathing patterns. In spite of its relative simplicity, the filter approach gives tracheobronchial and alveolar deposition estimates that are in good agreement with data obtained by the more involved cascade impactor-in silico modeling approach, when applied to the four DPIs and three pMDIs considered here.

This research was financially supported by Proveris Scientific Corporation and the Natural Sciences and Engineering Research Council of Canada (NSERC).

Patents have been filed on the technology described in this work, which may financially benefit the authors. Author DF is employed by Proveris.

The authors thank Milad Kiaee for assistance with computational fluid dynamics investigation of the filter design, and ASADA Mesh Company for supplying materials to construct the filter elements. Patents have been filed on the technology described in this work, which may financially benefit the authors.