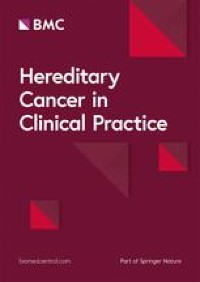 This study was carried out in conjunction with an implementation trial to improve LS testing [18]. Patients with CRC resection in the two calendar years prior to the start of the trial were included, ensuring none of the tumour testing and referral rates would be influenced by the trial itself. Specifically, this study included seven public hospitals (H1-H7 in the following) from three states in Australia: New South Wales (four hospitals), Victoria (two hospitals), and Western Australia (one hospital). Ethics approval for this study was granted by the Royal Prince Alfred Hospital Human Research Ethics Committee (reference HREC/17/RPAH/542); the ethics committee approved a waiver of consent from individual patients to collect the clinical data. Site-specific governance approval was obtained from each hospital site.

In each hospital, we identified all patients who underwent a CRC resection from 01/01/2017 to 31/12/2018. Depending on the hospital system, patients were identified from electronic hospital databases or surgeons’ records (see Additional File 3 for details). For each patient, pathology data were obtained from electronic patient medical records or using linkage to a pathology database. Throughout this study, data were obtained using structured queries of electronic databases where possible, supplemented with manual checks and additional data extraction (see Additional File 3).

Data on tumour testing and referral to genetics services

Reports for the following tests were obtained using pathology data and patient medical records as above: immunohistochemistry (IHC) tests for dMMR (i.e. loss of at least one MMR protein), PCR tests for MSI, BRAF V600E tests, and MLH1 promoter hypermethylation tests. Where no report for testing of the tumour sample was available, electronic medical records for tests undertaken on biopsy samples were checked manually. Data on discussion of patients at multidisciplinary team (MDT) meetings was available for all hospitals except H2.

After patients’ resection, pathology, and genetics service data were linked at each hospital, all patient information was de-identified and securely transmitted to the central study team for analysis.

For H1, testing guidelines changed in late 2017, so the number of patients with dMMR/MSI tests missing was also quantified separately based on 2017 and 2018 data.

We calculated the number of patients with tumour testing completed and the results indicating high risk of LS (i.e. at least one of: 1) high MSI, 2) MSH2 loss, 3) MSH6 loss, 4) PMS2 loss but no MLH1 loss, or 5) MLH1 loss with no BRAF V600E nor MLH1 promoter hypermethylation detected), and the proportion of these patients with a record of referral to genetics services (including any available records of referrals before or after the CRC resection). “High LS risk” here does not include patients with tumour MLH1 loss but a BRAF V600E variant or MLH1 promoter hypermethylation detected, as they were not generally considered to require a genetics services referral.

We assessed pairwise differences between hospitals for three gaps in testing and referral (Fisher’s test): missing (1) both dMMR and MSI test results; (2) BRAF V600E and MLH1 promoter methylation test results with tumour MLH1 loss; (3) record of referral to genetics services for patients with all tumour tests complete and indicating high LS risk. We also compared the number of patients with dMMR/MSI between hospitals (Fisher’s test). To account for multiple testing, significance was defined as p < 0.0024 (Bonferroni correction for 21 pairwise comparisons).

We assessed differences between the ages of patients who had tumours with versus without dMMR/MSI (two-sample Wilcoxon test); in a post hoc analysis, this test was repeated for patients aged < 70 years.

Finally, for patients with all tumour tests complete and indicating high LS risk who had a diagnostic genetic test, we tested for differences in age between those with and without a relevant pathogenic/likely pathogenic variant (two-sample Wilcoxon test).