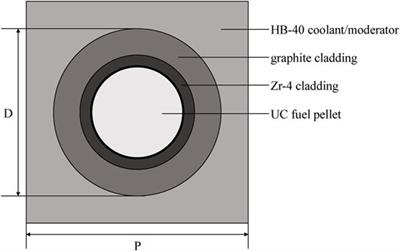 Small modular reactors have become a research hotspot in the field of nuclear energy, characterized by low power (less than 300 MWe), modular design and construction, outstanding safety, and economic performance. Among all worldwide designs of small modular reactors, an organic cooled reactor (OCR) is considered one of the most promising concepts (Shirvan et al., 2016).

OCR is a reactor concept that uses an organic fluid as a coolant, allowing high temperature and low-pressure operation, along with negligible corrosion on loop structure materials (Elberg and Fritz, 1963; International Atomic Energy Agency, 1967). OCR is compact, safe, and reliable, which can be used in many fields such as desalination, district heating, and hydrogen production. Since the 1950s, the United States, the Soviet Union, Canada, and other countries have built a number of test OCRs for different purposes (Binstock, 1960; Mccurnin, 1963; Hewson, 1965; Tegart, 1970; Tsykanov et al., 1981). In recent years, the advent of high-temperature fluids, together with advances in hydrocracking and reforming technologies driven by the oil and gas industries, make the OCR concept even more viable. In 2014, the Massachusetts Institute of Technology proposed a core design to be deployed offshore underwater for powering coastal areas, which was moderated by graphite and cooled by an organic fluid (Shirvan and Forrest, 2016). In 2019, the Royal Military College of Canada undertook a conceptual design of an organic cooled and moderated reactor for heating and powering remote areas of northern Canada (Shannon et al., 2020).

The current research on OCR is mostly limited to neutronics analysis (li et al., 2021; Wang et al., 2021). Little research has been carried out on thermohydraulics. In this study, a conceptual design of an OCR core with thermal power of 100 MW(th) is proposed, and the organic fluid HB-40 is used as a coolant. The Monte Carlo particle transport code MCNP is used to develop the physical model of the core for neutronics calculations, and the multi-physics simulation software COMSOL is used to develop the single-channel model for thermohydraulics calculations. By coupling the MCNP code and COMSOL software through mesh mapping and data transfer, a neutronics-thermohydraulics coupling method is established, and the upcoming research on thermohydraulics characteristics is carried out on this basis.

The OCR core designed in this study uses HB-40 (18wt% o-terphenyl, 82wt% hydrogenated terphenyl) as a coolant, an organic mixture that remains liquid at room temperature. HB-40 was used in the WR-1 Reactor in Canada between 1965 and 1985, where it would undergo a cracking reaction when exposed to high temperature along with radiation and would generate volatile gases as well as high boiling substances (Tegart, 1970). It is important to emphasize that HB-40 is assumed to remain stable in this research. Its physical properties only change with temperature, ignoring the cracking reaction or the effect of cracking products on the flow and heat transfer performance. The main properties of HB-40 are summarized as follows (Smee et al., 1975).

The formula for calculating the specific heat

Because HB-40 triggers cracking when exposed to radiation, in order to decrease the fluid damage caused by fast neutrons and photons, the structure of the fuel element is optimized by adding a graphite layer to the original Zr-4 cladding as moderator, as shown in Figure 1. It should be emphasized here that the optimized fuel element is designed to be held in the under-moderated region, although the calculation details are not presented to avoid a lengthy article.

Parameters of the Core Design

The OCR core is rated at 100 MW(th) and consists of 37 fuel assemblies (FAs). Each assembly includes 264 fuel rods, 24 guide tubes for control rod movement, and 1 measuring tube, arranged in square arrays of 17 × 17. The active height of FAs is 200 cm, and the equivalent diameter of the core is 147.5 cm. The detailed dimensions of the core are shown in Table 1, and the steady-state operation parameters are shown in Table 2.

TABLE 1. Parameters of the core structure.

To meet the demand of reactivity control, 21 of the 37 FAs contain control rod bundles with Ag-In-Cd as absorber material and 8 FAs contain burnable toxic rod bundles with borosilicate glass as absorber material. The arrangement of FAs is centrosymmetric, as shown in Figure 2. It must be emphasized here that all calculations in this study are performed at hot full-power operation, and all control rods are assumed to be withdrawn, also with a boric acid concentration of 0 ppm.

The Monte Carlo code MCNP5 is developed by Los Alamos National Laboratory, United States, which can treat an arbitrary three-dimensional configuration of materials in geometric cells. In this research, MCNP5 is used to build the physical model for the proposed core. Figure 3 shows the cross-sectional view of the core model. Besides the FAs, the baffle, barrel, and pressure vessel are also considered for the accuracy of neutronics calculations. F4 tally card is applied for neutron flux calculations, and F7 tally card is applied to obtain the radial and axial power distribution. In order to obtain axial power distribution, all FAs in the model are divided into 20 segments along the axial direction, and the power density of each segment in different FAs is calculated. For each calculation in MCNP, there are 330 generations, including 30 inactive generations, with an initial neutron number of 100,000 per generation, and a total of 30 million particle behaviors are recorded in every calculation.

FIGURE 4. Schematic diagram of (A) 3 × 3 channels model (B) single-channel model.

Thermohydraulics boundary conditions are defined for the solid and fluid domains separately in COMSOL (Weng et al., 2021). The temperature boundary of 553 K and “outflow boundary” are applied to the coolant inlet and outlet, respectively. The four surrounding faces are “symmetric boundaries” and the upper and lower surfaces for the solid part are set as adiabatic. The volumetric heat source is added to the fuel pellet, which is the calculated axial power density distribution. The heat transfer field of both solid and fluid domains is coupled with the turbulent field of the fluid domain, and the contact boundary between the fluid and the solid is set as a “wall” by default. The inlet boundary condition of the turbulent field is set as the inlet flow rate, and the outlet boundary condition is set as a constant pressure of P0 = 1.15 MPa with backflow suppression.

Due to the irradiated swelling problem of UC, which will force the fuel pellet to come into contact with the inner wall of the cladding during reactor operation, a contact heat conduction model is used for the gap heat conduction between the fuel pellet and the Zr-4 cladding. The equivalent heat transfer coefficient at the interface of irradiated UO2 fuel pellet and Zr-4 cladding is generally taken to be 5678 W/(m2·K) in the current fuel element design for pressurized water reactor power plants (Yu, 2002). Because the fuel element structures are similar and both UC and UO2 suffer from irradiated swelling, the empirical gap equivalent heat transfer coefficient hg = 5678 W/(m2·K) is adopted in this research to deal with the heat conduction of the gap.

Three grid quantities are provided for the grid irrelevance analysis of the single-channel model. The average temperatures of the cross sections at different axial positions are calculated under different grid quantities, as shown in Figure 5. It is found that the simulated temperature values are basically the same under the same calculation conditions, which meet the requirements of grid irrelevance. In this study, the calculation is completed using the model with a grid number of 116,000.

FIGURE 5. Axial temperature distribution of the single-channel model with different numbers of grids.

FIGURE 6. Flowchart of the coupling procedure.

FIGURE 7. Schematic diagram of the meshes used for data transfer.

FIGURE 8. Distributions of neutron fluxes and normalization power in each FA.

Finally, the normalized power distribution of the assemblies is given in the fifth row. As presented in Figure 8, the radial power peaking factor of the core is 1.239, and the assembly with the highest power density is D-4, located in the center of the core. Coolant channel with the highest power output is called the hottest channel, so the hottest channel is considered to exist in assembly D-4. The axial line power density distribution of D-4 before and after the coupling calculation is shown in Figure 9. After the coupling calculation, the axial power distribution of D-4 tends to be more like a cosine shape with less fluctuation, and the maximum line power density decreases to 9.10 kW/m. The axial power peaking factor of D-4 is 1.434. Therefore, the total power peaking factor of the core is 1.78.

Figure 10 shows the three-dimensional temperature for the single-channel model of D-4 assembly after the coupling calculation. Due to the uneven axial power distribution, the temperature in the center is significantly higher, with a maximum temperature of 946.8 K.

Regarding the steady-state thermohydraulics parameters of D-4, a comparison of the results before and after coupling is shown in Table 3. After the coupling calculation, the line power density of D-4 is reduced. Because the coolant flow rate of assemblies is distributed according to the power non-uniformity factor, the coolant flow rate of D-4 is consequently lower. Therefore, the calculated temperature distribution after coupling is basically the same. For example, the maximum temperature of the fuel pellet is only 7.6 K lower than that before coupling.

Figure 11 shows the temperature variation along the radial direction for the single-channel model of D-4 at axial height z = 1 m after coupling calculation. The curve shows three stages, whose structure in the order of temperature from the highest to the lowest are the fuel pellet, cladding (Zr-4 cladding and graphite cladding), and the coolant. There is a large temperature gradient between every two stages, and their formation is due to the existence of a gas gap and flow boundary layer, respectively.

is the sub-cooling degree of coolant, where

are the coolant saturation temperature and the body temperature, respectively.

FIGURE 12. Axial variation of heat flux on the fuel surface.

In order to obtain accurate neutronics and thermohydraulics parameters of the OCR core, a coupled neutronics-thermohydraulics calculation method is established based on the single-channel model, applying the Monte Carlo code MCNP and the multi-physics software COMSOL. By analyzing the results of coupled calculations, the conclusions are as follows.

2) After the coupling calculation, the line power density of the assembly, where the hottest channel is located, is reduced. However, the temperature distribution is basically the same because the coolant flow rate of assemblies is distributed according to the non-uniformity power factor.

This research provides a reference for future design and optimization of OCR, but further analyses should consider the effects of cracking products on organic fluid properties to predict the neutronics-thermohydraulics characteristic more accurately.

The raw data supporting the conclusion of this article will be made available by the authors without undue reservation.

The authors acknowledge the support of Science and Technology on Reactor System Design Technology Laboratory (JG2018119). They also gratefully acknowledge the financial support provided by the National Key R&D Program of the People’s Republic of China (2018YFB0104502).