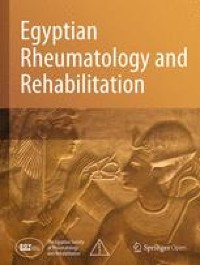 A 46-year-old female patient has had a history of mitral and aortic valve replacement for seven years and is on warfarin. She was presented 6 months ago with intermittent low-grade fever, generalized weakness, and dyspnea. Weakness was gradual, progressive, more proximal than distal, and more in her lower limbs than the upper. She had great difficulty getting up from bed or a chair and climbing stairs until she was bedridden in 1 month. Dyspnea was exertional, with a progressive course, and accompanied by any activity. The patient also had myalgia and polyarthralgia involving all joints proximally and distally. There were no sensory or sphincteric abnormalities, arthritis, Raynaud’s phenomenon, skin lesions, or proceeding infections.

One month later, she developed dysphagia that was initially to solids, and then exacerbated till it also involved liquids causing feeding difficulty. Also, the dyspnea progressed to be at rest; the weakness was extreme and disabling. The patient was admitted for diagnosis of her condition. On our examination at admission, she was conscious, alert, dyspneic, and had generalized edema. The respiratory rate was elevated (23 breaths per minute), blood pressure was normal, and pulse was faint (60 beats per minute). There were hypotonia and hyporeflexia. No fasciculations, pathological reflexes, signs of lateralization, or increased intracranial tension. The sensations were normal. Arterial blood gases, pH, and oxygen saturation were within the normal range. There were bilateral basal inspiratory crackles and mechanic’s hands, as shown in Fig. 1. The motor power grading was 2 in proximal muscles of upper limbs, 3 in the distal muscles in hand and wrist; however, it was 0 in proximal muscles in lower limbs, and 2 in distal muscles of ankle and toes dorsiflexors and plantar flexors.

After a few days of admission, the dyspnea was severe until oxygen saturation was extremely low (between 70 and 80 on room air, then the patient had oxygen therapy without elevation of the saturation). The generalized edema was increased significantly. The patient was admitted to the coronary care unit (CCU) for monitoring and oxygen therapy.

Regarding the patient’s investigations, there were extremely elevated muscle enzymes as creatine phosphokinase (CPK), creatine kinase-myoglobin binding (CK-MB), alanine aminotransferase (ALT), and aspartate aminotransferase (AST). Also, serum aldolase, lactic dehydrogenase (LDH), and ferritin were elevated, as shown in Table 1. Antinuclear autoantibodies (ANA) (1/80 titer and speckled in pattern), as well as the anti-Jo-1 antibody, were positive. There were also leukocytosis and thrombocytosis. Dyslipidemia was accidentally discovered and she started 40 mg atorvastatin and 10 mg ezetimibe daily.

The nerve conduction study showed axonal polyneuropathy, as shown in Fig. 2a–c, and surface electrode electromyography showed large amplitudes and duration motor units. We could not do a muscle biopsy as the patient was on warfarin. Magnetic resonance imaging (MRI) brain with contrast revealed abnormally high signal intensity white matter lesions in the high parietal regions, as shown in Fig. 3. These lesions were suggestive of small vessel vasculitis versus microangiopathy.

She was diagnosed with the anti-synthetase syndrome. We decided to start prednisolone only instead of pulse methylprednisolone for fear of sepsis as she had fever and leukocytosis; also, her general condition was unstable. She had 60 mg prednisolone that was tapered to 40 mg in 5 days. She also had three doses of intravenous immunoglobulins (IVIG) of 24,000 mg daily with mild improvement in the general condition and oxygen saturation after the first session, then no more progress.

We decided to elevate the prednisolone dose again to 60 mg daily and added mycophenolate mofetil (MMF) 3 gm daily. The condition started to improve regarding dyspnea, oxygen saturation (average 90 with nasal cannula 5 L per minute), generalized edema, and dysphagia after about 7 days of the beginning of MMF with high-dose prednisolone. The motor power improved minimally. We decided to do plasmapheresis for the severity of the condition and to accelerate recovery. She had day after day plasmapheresis sessions (four sessions) with significant improvement of her oxygen saturation (became 95 in room air) and muscle power grading (became 4+ in distal muscles (both hands and elbows) and 3 in proximal muscles, it was 3 in both lower limbs proximal muscles while 4 + in distal muscles as plantar flexors, dorsiflexors, evertors, and invertors). The CPK also decreased to 890 U/L.

She was discharged on 60 mg prednisolone and 3 gm mycophenolate mofetil. After 2 months, we started steroid tapering when the condition improved clinically, and serum CPK was 500. We created an alternate-day regimen of steroid tapering. Now she is on 30 mg prednisolone daily, alternating with 20 mg. Now the dyspnea and weakness have improved, CPK is 254, muscle power grading is 5 in both proximal and distal muscles; nerve conduction studies of all nerves are average, as shown in Fig. 4a, b; the prosthetic aortic valve is ultimately patent, and CT chest is completely normal. Table 1 shows the investigations before and after 5 months of treatment. She just experiences myalgia in her proximal muscles after effort.

The limited use of autologous hematopoietic stem cell transplant for fit older patients with multiple myeloma in India: a retrospective analysis – Journal of the Egyptian National Cancer Institute