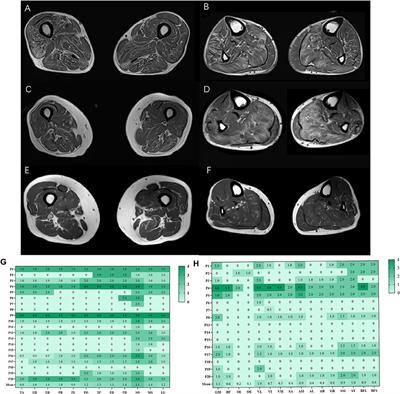 Muscle magnetic resonance imaging (MRI) is a painless and rapid tool to assess the pattern of muscle involvement in neuromuscular disorders. In hereditary neuropathies, muscle MRI can help determine the level of denervation by documenting the pattern of muscle atrophy and fatty infiltration. The length-dependent denervations were confirmed in many hereditary neuropathies, and muscle MRI exhibited a distal-to-proximal gradient of muscle damage (9, 10). Muscle MRI was also applied to amyloidosis. The reticular short-tau inversion recovery (STIR) hyperintensity and hypertrophy of adductor magnus have been described in systemic amyloidosis (11–13). This study aimed to explore the features of muscle MRI in ATTRv amyloidosis prospectively.

Twenty patients who had been diagnosed with ATTRv amyloidosis between July 2020 and August 2021 at Peking University First Hospital based on clinical manifestations and molecular analysis of the TTR gene were enrolled. All these patients with ATTRv amyloidosis had their disease history recorded in detail and underwent a focused neurological examination of measurement scales, including weakness scores of Neuropathy Impairment Score-Lower Limbs (NIS-LL), which assessed motor functions in lower limbs, and strength of ankle plantar flexion (dominated by gastrocnemius and soleus muscle) and ankle dorsiflexion (dominated by the tibialis anterior muscle) in NIS-LL weakness scores (a total value of bilateral legs). The NIS-LL contains sensation, strength, and reflexes of lower limbs with scores ranging from 0 to 88, we used the NIS-LL weakness scores including the strength of lower limbs with scores ranging from 0 to 64. The strength of ankle plantar flexion muscles and ankle dorsiflexion muscles in NIS-LL weakness scores ranged from 0 to 8, respectively. Nerve conduction studies (NCSs) and needle EMG were performed in these patients with ATTRv amyloidosis according to the standard protocol. The compound muscle action potential (CMAP) of the bilateral tibial nerves and common peroneal nerves of each of these patients were included in this study, and the amplitude of the CMAP was defined as the mean value of bilateral nerves. The severity of disability was evaluated according to the Coutinho stages of ATTRv amyloidosis (stage 0, no symptoms; stage I, unimpaired ambulation, mostly with mild sensory, motor, and autonomic neuropathy in the lower limbs; stage II, assistance for ambulation required, mostly with a moderate motor, sensory, and autonomic impairment of the four limbs; and stage III, wheelchair-bound or bedridden status with severe sensory, motor, and autonomic involvement of all limbs).

This study was conducted as recommended by the ethics committee of Peking University First Hospital with written informed consent from all patients.

IBM SPSS Statistics, version 24, was used for statistical analysis. The clinical data on the patients were included for descriptive statistics. Variables were presented as the mean standard deviation. Continuous variables between two defined groups were compared using a paired nonparametric test (Mann–Whitney test), while categorical variables were compared using the chi-square test or Fisher’s exact test where appropriate. Two-sided p values were calculated for all analyses, and p < 0.05 was considered statistically significant. Spearman analysis was used to test the correlation between MRI parameters and the clinical data.

The mean age of patients with ATTRv amyloidosis was 44.2 (ranging from 26 to 60) years. The mean duration of weakness was 23.3 ± 23.0 (ranging from 0 to 84) months. In clinical staging, 11 (55.0%) of these patients were assigned to Coutinho stage I, 8 (40.0%) to Coutinho stage II and 1 (5.0%) to Coutinho stage III. Eleven of these patients with ATTRv amyloidosis started with paresthesia of the lower limbs, followed by other onset symptoms such as blurred vision in four patients, alternating diarrhea and constipation in two patients, sexual dysfunction, orthostatic hypotension, and carpal tunnel syndrome in one patient, respectively. All these patients presented with polyneuropathy when enrolled in this study, and 18 (90.0%) of them manifested weakness of the lower limbs, namely prominent distal, prominent proximal, and no weakness in sixteen, two, and two patients, respectively. Thirteen (65.0%) of them were early-onset (<50 years). TTR gene screening was performed, with Val30Met mutation in five patients, and Gly83Arg, Val30Leu mutation in three patients, respectively. Lys35Asn, Ala97Ser, Val30Ala, Glu42Gly, Ala36Pro, Phe33Val, Gly47Arg, Ser77Phe, and Asp38Val mutation was in one patient, respectively (Table 1). The mean NIS-LL (weakness) was 27.2 ± 24.4, the mean NIS-LL (weakness) of the strength of ankle dorsiflexion muscles was 1.6 ± 1.5, and the mean NIS-LL (weakness) of the strength of ankle plantar flexion muscles was 1.4 ± 1.5. Nerve conduction studies were also performed in all these patients with predominant axonal impairment and needle EMG showed neurogenic damage in 15 out of all the patients. The mean value of the amplitude of the CMAP of the tibial nerve was 1.5 ± 2.3 mV, and the mean value of the amplitude of the CMAP of the common peroneal nerve was 1.4 ± 1.9 mV.

Table 1. Demographic and clinical characteristics of patients with ATTRv amyloidosis.

The proportion of fatty infiltration scores at the calf level was higher than at the thigh level with paired comparison (Figure 2A). However, there was no statistically significant difference (p = 0.0530) as three patients (patients 5, 8, and 17) had more severe fatty infiltration of muscles at the thigh level (Figures 1E,F). Patients 5 and 8 had no weakness on physical examination, and patient 17 had more severe weakness in proximal lower limbs than in distal ones.

This study was intended to conduct an in-depth analysis of the clinical phenotypes and characteristics of MRI of muscles of lower limbs in 20 patients with ATTRv amyloidosis whose mean age was 44.2 years. In general, the distribution and extent of fatty infiltration of the involved muscles were symmetrical and diffused. Overall, the pattern of muscle fatty infiltration was consistent with the muscle weakness of the distal-to-proximal gradient, which pointed to secondary neurogenic muscle impairment that had been confirmed in other hereditary and acquired peripheral neuropathies (9, 10, 16–18).

Interestingly, there was selective muscle fatty infiltration in patients with ATTRv amyloidosis to some extent, the posterior compartments of muscles had a larger fat fraction in lower limbs, especially at the calf level, and the soleus muscle was the most heavily involved, which could be a helpful diagnostic marker, as was recently reported by Primiano et al. (19). Compared to the study by Primiano et al., it was found in our study that the fatty infiltration at the calf level was also positively correlated with NIS-LL (weakness). In Charcot-Marie-Tooth (CMT) 1A, the largest fat infiltration was quantified in anterior and lateral compartments at the calf level, and selective intrinsic foot muscles involvement was typical of CMT 1A cases with minimal disease signs (16, 20). In CMT 2 cases, massive fatty atrophy of foot musculature was observed in muscle MRI (21). The distal-to-proximal gradient was also present in hereditary neuropathy with liability to pressure palsies, which was not a length-dependent neuropathy clinically (10). For acquired peripheral neuropathies, both anterior and posterior leg compartments were affected as in chronic inflammatory demyelinating polyneuropathy (CIDP) (18). In diabetic polyneuropathy, atrophy was the most pronounced in distal muscles of the lower leg, indicating a length-dependent neuropathic process, while abnormalities were the most pronounced in the plantar flexors by MRI assessment of skeletal muscles (17, 22). Limb-girdle muscle fatty infiltration in MRI could help monitor the evolution of amyotrophic lateral sclerosis (23). Good knowledge of denervation patterns by muscle MRI would facilitate the determination of the nerves involved and the extent of nerve entrapment (24). The relatively selective soleus muscle involvement might be a specific indicator of ATTRv amyloidosis, and posterior compartments seemed to confirm a predominant denervation pattern of tibial nerves.

However, three of these patients had more severe proximal fatty infiltration in the muscle MRI, with no or predominant proximal weakness. A previous study in the UK also described the proximal weakness in some patients (25). It was found that amyloid deposition throughout nerves might help account for proximal weakness (26). Furthermore, proximal weakness in lower limbs was also present in other polyneuropathies, such as CMT and CIDP (9, 27). However, previous studies also reported primary skeletal muscle impairments relating to amyloid deposits in ATTRv amyloidosis cases (6–8), which was why the involvement of myogenic injury should not be overlooked. Muscle fatty infiltration could occur before clinical weakness appeared, especially in proximal muscle, which demonstrated that the muscle MRI might be sensitive to motor dysfunction in ATTRv amyloidosis. The fatty infiltration of clinically normal muscles in CMT1A was also reported (20).

The studies involving human participants were reviewed and approved by the Ethic Committee of Peking University First Hospital. The patients/participants provided their written informed consent to participate in this study.

This study was supported by the Beijing Municipal Natural Science Foundation (No. 7194323).

We appreciated the cooperation of the patients and their families for their assistance.