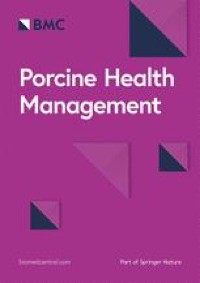 SwIAV antibody and swIAV prevalence in the different stable units

The results of the IAV antibody ELISA and the real-time RT PCR for IAV detection in gilts, first parity sows and piglets at the different stages of the production (quarantine in/out, mating, gestation and 1-week after farrowing) for the ten study herds are summarized in Table 1.

In the mating unit, a low prevalence of swIAV positive gilts was found as four herds had 5% of the gilts testing positive at this stage.

Among non-vaccinated herds, no swIAV was found among sows in the mating and farrowing unit, however, three of five herds had swIAV circulating among piglets in the farrowing unit with a prevalence of 10 to 35% (Table 1).

The prevalence of virus positive sows or piglets did not differ significantly between non-vaccinated and vaccinated herds (p > 0.9, Table 2).

Among all ten herds included, two herds included a primary (prime-boost) vaccination program for gilts within the quarantine (Table 3).

A comparison of the prevalence of swIAV positive- and swIAV antibody positive gilts in relation to the application of a primary vaccination (prime-boost) program for gilts within the quarantine is summarized in Fig. 2b.

A regression model with herds as fixed effect showed a significant lower risk of viral shedding by the end of the quarantine period with the use of swIAV vaccination or AIAO management of the quarantine (Table 6).

The results of the questionnaire and the check-list are presented in Table 3 and Additional file 3: Table S1. Table 3 provides an overview of the vaccination strategies applied in the vaccinated herds. In brief, it should be noted that only two of the influenza vaccinated herds, had a primary (prime-boost) vaccination in the quarantine, and all herds included gilts/first parity sows in their mass sow vaccination program. Moreover, all vaccinated herds applied several other vaccines at the same time as the influenza vaccine. In specific, Herd 10 was applying a modified live vaccine against porcine reproductive and respiratory syndrome virus (PRRSv) at the same time as the Respiporc FLU3 vaccine (Ceva Santé Animale, France). Additional file 3: Table S1 provides information on herd size and production systems as well as health status, quarantine location and -management and IAV vaccination status of the personnel. In brief, it should be noted that five of the herds had a continuous intake of gilts into the sow herd, and that only one herd had personnel (4 out of 7 workers) that was vaccinated against human seasonal influenza virus.

From six (four non-vaccinated and two vaccinated) of the nine swIAV positive herds it was possible to determine the HA and NA lineages circulating in the herds by sequencing. In the remaining three swIAV positive herds, the viral load was too low to obtain high quality sequences. The HA and NA sequences were compared to the sequences of the corresponding vaccine strains included in Respiporc FLU3 [18] (Table 3). For the four herds where an hemagglutinin (HA) protein of the Eurasian avian H1 lineage (H1av) was identified a comparison was made to the corresponding H1av vaccine component of Respiporc FLU3. The comparison revealed major differences as the overall amino acid identity ranged between 89–92%, and several residues in both antigenic sites (AS) and the receptor binding site (RBS) were divergent (Table 7 and Additional file 4: Figure S1). One of the four herds was vaccinating with Respiporc FLU3 (Herd 10). The remaining vaccinated herd wherefrom it was possible to determine the lineage of the circulating strain, it was discovered that a non-matching vaccine was applied as the H1pdm09N1av strain was detected.

Herd 1 was a newly started herd with a new breeding stock. Interestingly, 30% of the gilts of this herd were positive for H1N1pdm09 at the end of the quarantine, thereby posing a high risk for swIAV introduction into the newly established sow herd, where no swIAV was documented at least in the gilts, first parity sows and piglets sampled in this study. It was therefore decided to investigate if swIAV were circulating within the sow herd 3 months later. Remarkably, these “follow-up” samples revealed that 9/12 pools obtained in the farrowing unit was positive for H1N1pdm09, including pigs from 1- to 4-week-of-age.