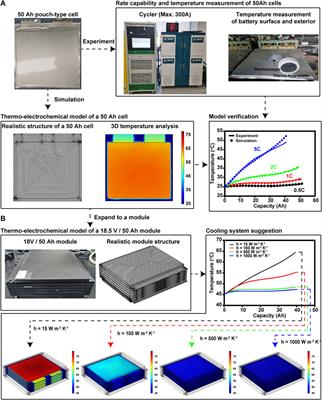 In this regard, it is essential to understand the reasons behind the accidental fire or explosion of EVs to develop practical solutions. Many researchers have attempted to determine the causes and mechanisms of thermal runaway (TR), a process that frequently occurs in LIBs. TR can be divided into three stages (Feng et al., 2018). In the first stage, the voltage decreases slowly along with a slight increase in temperature, both of which go relatively undetected. However, when the voltage starts to decrease rapidly and the temperature rises significantly, the second stage begins. If the temperature reaches a critical point, such as the meltdown temperature of the separator, the LIB combusts or explodes. To avoid TR, it is necessary to control the temperature of the LIB so that TR does not progress beyond the first stage.

Kim et al. developed a thermo-electrochemical model of a prismatic-type cell of 50 Ah and predicted the temperature. However, the main parameters, i.e., the diffusion coefficient and rate constant (exchange current density), were set as constant values despite their dependence on the temperature and state of lithiation (SOL). Their simulated electrochemical performance was not verified with experimental results. Moreover, their model was not extended to a module or pack scale, which is essential for practical applications (Kim et al., 2014). Bahiraei et al. and Liang et al. developed thermo-electrochemical models for modules with pouch-type 10 Ah LIB cells for HEV applications. However, it is difficult to apply these models to large-format and high energy density LIB modules for railway vehicles because their cell designs are totally different. (Bahiraei et al., 2017; Liang et al., 2020). Owing to the increased concerns over the safety of battery systems in railway vehicles, more realistic battery module models based on large-format and high energy density LIB cells should be developed and utilized to predict not only the electrochemical performance but also the thermal hazard status for optimum cooling systems.

To achieve this purpose, we attempt to build a thermo-electrochemical model of an 18.5 V/50 Ah module with five 50 Ah LIB cells in series and module parts. To determine both the electrochemical and thermal behavior of the module model, all parameters, such as the chemical diffusion coefficient and exchange current density for electrochemical characteristics, are included in the temperature-dependent functions of the model. The accuracy of the cell model is verified by comparing the experimental and simulated data for C-rates of 0.5, 1, 2, and 5C at three exterior temperatures of 25°C, 35°C, and 45°C. Then, the module model using the cell model is used to investigate the electrochemical behavior under actual wireless tram driving patterns and thermal abuse conditions.

The compositions of the cathode and anode electrodes were confirmed by energy-dispersive X-ray spectroscopy. From the relative atomic ratio of Ni, Co., and Mn of 4:4:2, the cathode active material was considered to be LiNi0.4Co0.4Mn0.2O2. Similarly, since no peaks other than C were observed in the anode, we assumed that the anode active material was graphite (Supplementary Figure S4).

We evaluated the rate capability of 50 Ah cells by changing the C-rates from 0.5 to 5C at exterior temperatures of 25°C, 35°C, and 45°C using a cycler capable of 300 A current (PEBC05-300, PNE). In each rate capability test, the temperatures on the cell surface and in the chamber were recorded for comparison with the corresponding simulated data.

Development of a Thermo-Electrochemical Cell and Module Model

FIGURE 1. A thermo-electrochemical model development process from (A) a 50 Ah cell model with experimental proof to (B) an 18.5 V/50 Ah module model.

Thermo-Electrochemical Model of a 50 Ah Cell

FIGURE 2. Schematic of the combination of the electrochemical model and heat transfer model, and domains, boundary conditions and equations.

The reliability of our cell model was confirmed by comparing the simulated capacity values, voltage profiles, and temperatures with the experimentally measured values. As summarized in Figure 4, the simulated voltage profiles showed good agreement with the experimental results at various C-rate and temperature conditions because both the exchange current density values and diffusion coefficients were well formulated by the cell model, as shown in Figure 3. More specifically, our cell model achieved an accuracy of over 98% even at 5C over a wide temperature range [98.47% (Figure 4A), 98.96% (Figure 4B), and 98.92% (Figure 4C) at exterior temperatures of 25°C, 35°C, and 45°C, respectively].

The simulated surface temperatures of the cell model were compared with the experimental measurements, as shown in Figure 5. Because the heat source caused by electrochemical reactions (Supplementary Figure S5) and the heat transfer through convection were well simulated at various C-rates and exterior temperature conditions, the accuracy was high, similar to the simulated capacity values and voltage profiles. For instance, even at 5C (the most extreme case) the simulated temperatures of 25°C, 35 and 45°C showed high accuracy of 97.89% (Figure 5A), 97.05% (Figure 5B), and 98.44% (Figure 5C), respectively. Our cell model can also estimate the overall temperature distribution in the 3D cell structure, including the pouch package, as shown in Figure 5 (top). However, tab heating caused by internal resistance was excluded because information on the welding condition was not available.

FIGURE 5. Simulated temperature profiles of the cell model as a function of the C-rate (0.5, 1, 2, and 5C) at exterior temperatures of (A) 25°C, (B) 35°C, and (C) 45°C. Experimentally measured data are also depicted in each graph. At the top, the simulated temperature distribution images over the cell are displayed in the 3D domain.

Development of Thermo-Electrochemical Model of an 18.5 V/50 Ah Model

Based on a verified cell model, we built a thermo-electrochemical model of a module with five cells, as shown in Figure 6A, based on the following assumptions: 1) All the cells have the same initial characteristics such as cell dimensions, capacity, and heat capacity. 2) The same current flows through all the cells with no contact resistance between cells. 3) All the cells were cooled with the same convection efficiency.

FIGURE 6. (A) (Left) Photo of an actual battery module with five cells and covers. (Right) The digital-twinned module structure with meshes. (B) Surface temperature changes of cells (measured) and modules (simulated) at external temperatures of 25°C, 35°C, and 45°C during 5C discharging.

Designing a cooling system requires quantifying the amount of additional heat that must be transferred to the surroundings. Based on the fitted heat transfer coefficient of 15 W m−2 K−1 in the thermo-electrochemical cell model, the coefficient was increased to 100, 500, and 1000 W m−2 K−1 in the module model at exterior temperatures of 25°C (Figure 7A), 35°C (Figure 7B) and 45°C (Figure 7C). As shown in Figure 7, a minimum of ∼100 W m−2 K−1 is required to keep the maximum temperature of the module below the highest operating temperature set by the USABC (Cherry, 2016). Thus, for the safer and more reliable operation of the module, we simulated the control of the module temperature with a maximum heat transfer coefficient of 500 W m−2 K−1, which is theoretically available under forced convection with air (Kosky et al., 2021). Regardless of the exterior temperature, all the temperatures in all cases were maintained within 4°C. However, because the space inside the module is limited and the parts of the module cover prevent air from flowing through the module, this cannot be achieved in a practical manner (Park and Jung, 2013). In this context, coolants with higher heat capacities should be considered for actual battery module or pack systems. Among them, some phase change materials that can remove up to 3000 W m−2 K−1 of heat have been considered in previous studies (Merlin et al., 2016; Zou et al., 2019; Nie et al., 2020). To examine these situations, we simulated the temperature changes under the same conditions with a coefficient of 1000 W m−2 K−1. As expected, compared with the 500 W m−2 K−1 case, no significant enhancement was observed: only 1°C was additionally controlled.

Temperature Changes Under an Actual Driving Pattern of Railway Vehicles

Contrary to the case study in Temperature Changes Under an Actual Driving Pattern of Railway Vehicles, it is also useful to validate our module model under real driving patterns at 25°C. Based on a power pattern for a real tram operated in Turkey (Figure 8A) (Han et al., 2018), we built a driving current pattern for our module, as shown in Figure 8B, by considering the total number of cells of 1,076 and single cell capacity of 40 Ah. In this pattern, although the maximum C-rate reached 4C, most of the C-rates were maintained below 1C. As a result, the temperatures of the actual cell, cell model, and module model had similar changes without big differences (Figure 8C). Thus, our thermo-electrochemical models for cells and modules are reliable and can be utilized under normal and extreme operating conditions.

To assess and control the risks posed by the heat generated by battery modules for wireless railway vehicles, we built a thermo-electrochemical model for an 18.5 V/50 Ah module with five lithium-ion cells (3.7 V/50 Ah). First, a single cell model was developed with an accuracy of over 97% in terms of the capacity values, voltage profiles, and temperature changes under three exterior temperature (25°C, 35°C, and 45°C) and four C-rate (0.5, 1, 2, and 5C) conditions. Then, the cell model was utilized to build the 18.5 V/50 Ah module model with cover parts. Comparison of the simulated temperature changes of the module with that of the single cell showed that the temperature of the module could exceed 6°C during the 5C discharging condition regardless of the exterior temperature. Furthermore, the maximum temperature of the module of 25°C during the 5C discharging process was expected to increase beyond the highest operating temperature of 52°C set by the USABC. Therefore, it was necessary to determine the amount of heat to be removed. With our module model, we proposed the minimum heat transfer coefficient for cooling systems. Under the driving pattern acquired by a real wireless tram operated in Turkey, not only the cell but also the module maintained its temperature within 3°C. Nonetheless, some unexpected or extreme accidental cases should be considered for risk management. For this purpose, thermo-electrochemical models for modules should be developed and investigated continuously with state-of-the-art large-format and high energy density lithium-ion cells.

This work was supported by the BK21 FOUR program through the National Research Foundation (NRF) funded by the Ministry of Education of Korea, by the National Research Foundation of Korea (NRF) grant funded by the Korea government (MSIT) (No. 2020R1A4A4079810), and by a grant from R&D Program (Development of fire safety improvement technology for ESS (Li-ion battery) in rolling stock, PK2102A1) of the Korea Railroad Research Institute.

We are also very grateful for the support from the DGIST Supercomputing and Bigdata Center.

The Supplementary Material for this article can be found online at: https://www.frontiersin.org/articles/10.3389/fmats.2022.824168/full#supplementary-material