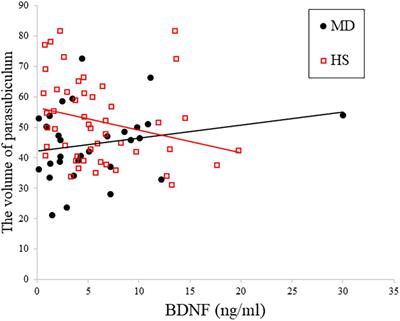 Depression is one of the most commonly occurring mental disorders, with a total lifetime prevalence of approximately 15–18%. Depression has a significant impact on patients’ quality of life, including social connectivity, economic security, and professional attainment (Malhi and Mann, 2018).

A previous report from the ENIGMA study, a comprehensive investigation conducted using Magnetic Resonance Imaging (MRI) to evaluate brain structure, function, and disease, demonstrated that hippocampal and amygdala volumes were statistically significantly decreased in depressed patients as compared to healthy controls (Schmaal et al., 2016). Chronic stress conditions are known to increase cortisol levels, and prior research suggests that this excessively increased cortisol may be associated with atrophy of the hippocampus and amygdala (Wingenfeld and Wolf, 2014).

BDNF (brain-derived neurotrophic factor), one of several neurotrophic factors that are widely present in the brain, promotes neurogenesis and synapse formation and is involved in synaptic plasticity (von Bohlen Und Halbachand von Bohlen Und Halbach, 2018). In stress-associated diseases, including depression, BDNF expression is decreased mainly in the hippocampus (Notaras and van den Buuse, 2020). Moreover, antidepressants (Jiang et al., 2019) and electroconvulsive therapy (Holtzmann et al., 2007) increase BDNF expression in the hippocampus, serum and plasma BDNF levels are decreased in depressed patients (Bocchio-Chiavetto et al., 2010), and antidepressant treatment increases BDNF levels as depressive symptoms are restored (Sen et al., 2008; Zhou et al., 2017). In addition, since BDNF crosses the blood-brain barrier (Pan et al., 1998), BDNF in the brain and periphery may affect hippocampal volume. For example, a recent study examining the relationship between hippocampal volume and serum BDNF concentrations in healthy controls found no relationship between the hippocampal volumes and serum BDNF concentrations (Puhlmann et al., 2021). From these findings into account, we hypothesized that hippocampal volume would be decreased in patients with MD as compared with healthy controls, and that BDNF concentrations would be positively correlated with hippocampal volumes.

We recruited patients with major depression (MD) and healthy controls (HC) as follows. Depressed patients were recruited from among consecutively presenting patients at the University hospital of the University of Occupational and Environmental Health, Japan. All MD patients were diagnosed by board-certified psychiatry based on standard criteria delineated in the Diagnostic and Statistical Manual for Mental Disorders-5 (DSM-5). We enrolled depressed patients who had not yet started antidepressants to remove the effects of medication of these associations. The control group was recruited from a neighboring community through posting or calls. Subjects enrolled in the HC group had never been diagnosed with any psychiatric disorder according to the findings of the Structured Clinical Interview for DSM Disorders (SCID). Written informed consent was obtained from all patients prior to participation. This study was approved by the ethics review board affiliated with our hospital and was conducted in accordance with the principles of the Declaration of Helsinki.

Plasma was collected from MD patients and HC in order to measure plasma BDNF; 15 mL of venous blood was collected in EDTA-2Na spray-coated blood vacutainers from each study participant, whole blood samples were centrifuged at 1,650 g for 25 min at room temperature. Subsequently, plasma samples were stored at −80°C. Plasma BDNF concentrations were measured using the BDNF Emax Immunoassay Kit (Promega, Madison, WI, United States), in which 96-well microplates were coated with anti-BDNF monoclonal antibody and incubated at 4°C for 18 h. The plates were incubated in a blocking buffer for 1 h at room temperature, and 100-fold diluted samples (i.e., diluted with assay buffer and BDNF standards) were kept at room temperature for 2 h under conditions of horizontal shaking and were then washed with the assay buffer. The plate was also washed with the buffer. Following this, the plate was incubated with anti-human BDNF polyclonal antibody for 2 h at room temperature and was then washed with the buffer again. The plates were incubated with anti-IgY antibody conjugated to horseradish peroxidase for 1 h at room temperature to induce a color reaction with a peroxidase substrate and a tetramethylbenzidine solution. The reaction was carried out in a 1 mol/L salt solution. The reaction was stopped with 1 mol/L hydrochloric acid and the absorbance at 450 nm was measured with an Emax automated microplate reader (Promega).

Volume Measurement of the Hippocampal Subregion

Thirty patients with first-episode untreated MD and 49 HC were enrolled in the current study. The main background factors are shown in Table 1. There were no statistically significant differences in sex, age, or plasma BDNF concentrations between the HC and depression groups (sex: p = 0.12, age: p = 0.14, plasma BDNF: p = 0.79).

Table 2. A comparison between the MD Patients and healthy controls in nuclei of hippocampus.

Table 3 shows the results of multiple regression analyses evaluating associations between plasma BDNF concentrations and hippocampal subregional volumes. In the MD group, we found a positive linear correlation between hippocampal volume and plasma BDNF concentrations in the CA4 area on the left side [β = 2.96 (95%CI 0.10, 5.83), r = 0.77, p = 0.043]. In contrast, in the HS group, we found a negative linear correlation between plasma BDNF concentrations and parasubiculum volume on the right side [β = −0.85 (95%CI −1.66, −0.04), r = −0.42, p = 0.04] (Figure 1). Both also showed a significant correlation with plasma BDNF levels by partial correlation analysis (CA4 on the left side in the MD group: r’ = 0.39, p = 0.043; the parasubiculum on the right side in the HC group: r’ = −0.30, p = 0.04). The partial regression coefficients between plasma BDNF levels and hippocampal volumes calculated for each subregion showed different distributions in the MD and HC groups (Figures 2, 3). Figure 1 demonstrates the presence of an interaction between the right parasubiculum volume and plasma BDNF levels in the MD group (p = 0.013).

In this study, we found that the volumes of the left-sided HATA, the right-sided parasubiculum, the presubiculum, and the fimbria were statistically significantly smaller in first-episode untreated patients with MD as compared with a HC group. Results reported by Han et al. (2019) which evaluated the same (repetitive) MD group as well as patients on antidepressant medication, demonstrated that the MD group had statistically significantly smaller bilateral CA1, CA4, granule cell layer (GCL), molecular layer (ML), and whole hippocampal volumes as compared to the HC group (Han et al., 2019). Another reported that there were no statistically significant differences in the volume of any hippocampal subfield in the MD group (including cases who were or were not receiving medical treatment for depression) as compared with the HC group (Zhang et al., 2021). A prospective 7-year follow-up study of MD patients conducted by Wisse et al. (2015) found that the number of depressive episodes in the enrolled patients was associated with atrophy of the subiculum volume (Wisse et al., 2015; Zhang et al., 2021).

Moreover, in untreated women with MD, the volumes of the left subiculum, CA2-3, CA4, dentate gyrus, and right subiculum were statistically significantly smaller than those in the HC group in prior research (Han et al., 2016). We also note that 7T MRI was used by Brown et al. (2019) to examine the relationship between hippocampal subfield volumes and MD severity. These researchers found that right-sided CA1 and CA/43 volumes were negatively correlated with depression severity. In other words, the more severe the MD symptoms, the greater the atrophy of this hippocampal subfield (Brown et al., 2019). In light of the above results, it is likely that changes in the hippocampal subfield in MD patients are influenced by the number of depressive episodes, the presence or absence of medication, sex, and the severity of depression. However, our results suggest that some hippocampal subfields in the MD group may already be atrophic at the start of the disease.

BDNF is a neural-derived factor that is involved in neuroplasticity and is closely associated with neurogenesis and synaptic plasticity in the hippocampus. Prior studies conducted by this research group have reported that plasma and serum BDNF levels are statistically significantly lower in MD patients as compared with healthy controls (Kishi et al., 2018; Yoshimura et al., 2018). However, in the present study, no differences in plasma BDNF concentrations were observed between the MD and HC groups. The most likely reason for these discrepant findings is the small number of enrolled cases (given restrictions for medication use).

In addition to the substantial strengths of this study, we acknowledge several limitations. First, we conducted a cross-sectional study enrolling a small number of cases, and thus the causality of relationship between the observed hippocampal subfield changes and plasma BDNF levels is unclear. A longitudinal study enrolling a larger number of patients is needed to evaluate these findings more thoroughly and comprehensively. Future highly powered studies should also evaluate the effects of antidepressant medications on the observed findings.

Differences in hippocampal subfield volume were observed when comparing enrolled first-episode untreated patients with MD to healthy controls. Some hippocampal subfields were correlated with plasma BDNF levels, and an interaction was observed between the right parasubiculum volume in the MD and HC groups with respect to plasma BDNF levels. These results suggest that some hippocampal subfields may already be atrophic at the start of MD, and that the sensitivity of the right parasubiculum region to BDNF may differ between MD and HC groups. Our findings guide future research directions and, if confirmed, may ultimately inform medical guidelines.

The studies involving human participants were reviewed and approved by the University of Occupational and Environmental Health, Japan. The patients/participants provided their written informed consent to participate in this study.