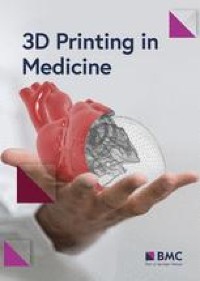 The Laser 1 and EBM printing methods each contain two groups, one with an external frame and one without an external frame. Length, width, and depth averages were calculated for each test group and quantified relative to the respective nominal dimension. As shown in Fig. 2A.ii, most experimental groups differed from the nominal; the minimum average difference was the framed Laser 1 length measurement at 35 μm over the total 22 mm length while the maximum average difference occurred in the unframed EBM depth at 669 μm over the total 8 mm depth. In addition, there is a statistical difference (p < 0.05, Tukey’s HSD) between framed and unframed groups in all three external dimensions for the Laser 1 samples. For the EBM samples, there was only a statistical difference (p < 0.05, Tukey’s HSD) between the framed and unframed coupons for the width dimension. Both the length (p = 0.066, ANOVA) and the depth (p = 0.454, ANOVA) measurements did not show statistical differences between framed and unframed groups. The EBM width was approximately 0.41 mm greater than nominal and the depth was approximately 0.67 mm greater than the nominal for both groups. Similar to the Laser 1 groups, the EBM groups all differed from the nominal and did not show any preferences between framed and unframed groups.

Images were taken of the top and the side of each sample (Fig. 1) using a HiRox Microscope and the lattice regions were evaluated for pore area using ImageJ. Data was quantified relative to the respective designed pore area for each group by subtracting the nominal designed pore area from the experimental value (Fig. 3A). Trends in the data show the pores tend to be smaller than the designed geometry, and EBM test groups show large variability in pore size for both the top face and the side face of the lattice coupons.

Three samples of each group were evaluated using a microCT system. Strut thickness values were quantified relative to the designed strut thickness for the corresponding group (Fig. 3B). Results indicate the average strut diameter was smaller than the nominal design, however, the variability was relatively consistent between all groups.

As shown in Fig. 4, there are visible structural differences in the lattice coupon between the two printing methods when the same design file was printed. It is important to note that there were challenges in analyzing pore area in the EBM samples when using the non-destructive visual assessments shown in Fig. 3A.

Additional samples were created to evaluate the effect of relative density on dimensional variability. Samples were designed with varying relative densities (15%, 25%, 35%, 45%) and manufactured on a separate laser system (Laser 2) than the Laser 1 samples discussed previously. However, similar measurement techniques were applied to these samples. External length, width, and depth measurements were obtained for each relative density and quantified relative to the respective nominal dimension: length = 22 mm, width = 9 mm, depth = 8 mm (Fig. 5A(i)) by subtracting the nominal. There was a statistically significant difference in the length dimensions when the different relative densities were compared (p < 0.05, ANOVA). However, post-hoc analysis of as-printed samples only showed a statistical difference between the 15% and 35% length dimensions (p = 0.03, Tukey’s HSD).

The top and the side of each sample were imaged, and ImageJ was used to evaluate pore size. Data was quantified compared to the designed pore area for each group (Fig. 5C). Trends in the data show that the pores tend to be larger than the designed geometry, but the variability in pore size for both the top face and the side face of the lattice coupons did not appear to vary between relative density groups.

Three samples of each group were evaluated using a microCT system to quantify the average strut thickness values of each sample. Strut thickness values were normalized to the designed strut thickness for the corresponding group (Fig. 5D). Results indicate that the average strut diameter was smaller than the nominal designs for each relative density. However, the dimensional variability appeared to be consistent across groups whether the samples were as-printed or post-HIP.

As stated previously, this analysis began with non-destructive testing to evaluate assessment methods that maintained the structural integrity of each sample. However, due to the conflicting results shown in Figs. 2 and 3, a different and destructive test method (ASTM F1854-15 “Standard Test Method for Stereological Evaluation of Porous Coatings on Medical Implants”) was also used. Cylindrical lattice coupons were evaluated using the microCT method and subsequently the ASTM F1854 method allowing the strut thickness measurements to be compared for the same samples.