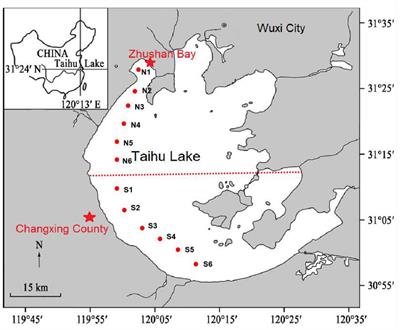 The concept of eutrophication was first introduced by Lindeman in 1942, and the study concluded that the eutrophic stage of a water body is the last stage of the natural evolution of a normal lake (Lindeman, 1942). The water body reaches the eutrophication level when the nutrient total phosphorus (TP) > 0.02 mg/L and nitrate nitrogen (NO3–-N) > 0.3 mg/L (Namsaraev et al., 2018). Eutrophication of water bodies was once compared to “ecological cancer,” which destroys the ecosystem of water bodies and causes the ecological imbalance of water bodies by making the community structure homogeneous (Ramachandra and Solanki, 2007). Freshwater eutrophication is a widespread global environmental problem and a consequence of intense human activities (Wang et al., 2019). Currently, 54% of Asian lakes, 53% of European lakes, 48% of North American lakes, 41% of South American lakes and 28% of African lakes are eutrophic (Zhang et al., 2020).

According to the process of eutrophication formation, there are two types of eutrophication, natural and man-made (Conty and Bécares, 2013). Natural eutrophication mainly refers to the continuous deposition of soil erosion, evaporation, precipitation, river entrained alluvium, and aquatic debris at the bottom of water caused by natural environment without human interference, and the enrichment of nutrients in water bodies, which in turn leads to the development of water bodies from poor nutrients to eutrophication, gradually evolving into swamps and eventually into land. The process of eutrophication under natural conditions is very slow and takes hundreds or even tens of thousands of years to complete (Cui et al., 2021; Padedda et al., 2021). Nutrients contained in industrial, agricultural, and domestic wastewater have caused the eutrophication of lake water, degrading the quality of the water and the aquatic ecosystem (Liu and Wang, 2016). From the perspective of primary production of water bodies, eutrophication can be further classified into the following four categories: hypertrophic, eutrophic, mesotrophic, and oligotrophic (Kim et al., 2021; Wang et al., 2021). N and P were regarded as the limiting factors to the density of aquatic organisms and the main reduction objects especially for the cultural eutrophic lakes (Yuan et al., 2011). The sources of nutrients include two categories: external sources include the discharge of urban living and production wastewater (point source pollution) and lake runoff, farmland surface runoff, lake precipitation, dustfall, farming bait, etc. (non-point source pollution); internal sources are mainly the dead decay of aquatic plants and animals, and nutrients released from sediments. In addition, the destruction of the water body ecosystem is also one of the reasons for the deterioration of the water body. A good biological community structure of the aquatic environment is not only a good indicator of the health of the water, but also a guarantee of the self-purification of the water (Schindler et al., 1987; Madsen and Cedergreen, 2002; Rahaman and Sinha, 2013; Coluccio et al., 2021; Younes et al., 2021).

As an important part of the water ecosystem, microorganisms play a very important role in the migration and transformation of nutrients, organic matter and other materials at the water-sediment interface. Microorganisms can influence the nutrient status in the water environment, and when the external environment in the aquatic environment changes, the species and abundance of the microbial community will also change (Moshiri and Crumpton, 1977; Phelps et al., 1994; Jonah et al., 2015; Lakshmipathi et al., 2019; Vincent et al., 2021). At present, studies on microbial communities have mainly focused on the vertical distribution characteristics of the microorganisms in sediments within a specific region, and relatively few studies have been conducted on the dominant populations and microbial community structure under different trophic states of the environment (Sangakkara, 1997; Powlson et al., 2001; Haller et al., 2011; Liu et al., 2015).

In this study, the water quality and nutrient content in sediments of Taihu Lake, a typical eutrophic lake in China, were monitored for three consecutive years in the northern (Changzhou City) and southern (Changxing County) regions of Taihu Lake, respectively, and the microbial diversity in sediments was analyzed. And then the effects of different nutrient environments on microorganisms in the aquatic environment were summarized. This study can provide valuable experience for the study of biodiversity in eutrophic lakes.

Taihu Lake is the third largest freshwater lake in China, which is located in the core area of Yangtze River Delta. In recent years, with the rapid economic development and population growth as well as frequent human activities, industrial wastewater, and domestic sewage continuously flow into the lake, making the eutrophication problem of Taihu Lake more and more serious. In this study, lake water and surface sediment samples were collected from six points (N1–N6; S1–S6) each in North and South Taihu Lake for subsequent water quality analysis and microbiological analysis from 2019 to 2021, respectively, and the sample points were collected as shown in Figure 1.

The changes in water quality monitored from January 2019 to November 2021 are shown in Figure 2. The values of WT in South and North Taihu Lake are 6.2°C–31.4°C (mean value 19.7°C) and 3.5–32.1°C (mean value 20.1°C), respectively. There is no significant difference between the WT in South and North Taihu Lake, but the temperature difference is large in all quarters, with certain characteristics of time and space distribution. The highest temperature of each year is concentrated in July–September, and the lowest temperature in January. The values of pH are 6.49–8.45 (mean value 7.29) and 6.89–8.88 (mean value 7.66), with a small trend of pH variation, and no obvious pH exceedance was found. The DO levels ranged from 4.00 to 10.71 mg/L (mean value 6.85 mg/L) and 4.55 to 11.33 mg/L (mean value 7.48 mg/L), respectively. The maximum concentration of DO in South Taihu Lake in winter and the lowest in summer and autumn, and the minimum concentration of DO in North Taihu Lake in winter and the maximum in summer. The conductivity of South Taihu Lake ranged from 15.1 to 48.9 ms/m (average value 34.9 ms/m), and the conductivity fluctuated irregularly from year to year, with the lowest conductivity in autumn. The turbidity of North Taihu Lake ranged from 10.22 to 47.01 NTU (mean value 28.98 NTU), and the overall turbidity was high, especially in summer and autumn, indicating that the water body was turbid.

Figure 2. Water quality of South (A) and North (B) Taihu Lake.

Figure 3. Nutrient concentrations in water of South (A) and North (B) Taihu Lake.

Figure 4. Nutrient concentrations in sediment of South (A) and North (B) Taihu Lake.

Evaluation of Microbial Diversity in Sediments

Types and Roles of Microorganisms

Figure 5. Changes in microbial communities at the phylum level in the sediments of South (S) and North Taihu Lake (N).

The sampling sites N1–N6 located in the northern part of Taihu Lake were all in the phylum Proteobacteria > Bacteroidetes > Cyanobacteria, with relatively low diversity, and the proportions of the three main phyla were N1 (50.90, 17.13, 5.70%); N2 (39.29, 26.87, 8.79%); N3 (37.80, 25.99, 8.99%); N4 (52.13, 16.97, 10.65%); N5 (41.86, 22.98, 8.67%); N6 (43.26, 22.13, 12.61%). Although the distribution of dominant phyla was the same at each sampling site, the relative abundance content of each phylum varied significantly. And the species composition of microorganisms in sediment samples from North and South Taihu Lake at the phylum level was somewhat different; the microbial diversity in South Taihu Lake was higher than that in North Taihu Lake, indicating that microbial diversity was negatively correlated with the concentration of nutrients. However, there are evidence that the abundance and biomass of various microbial components increases with the eutrophication of aquatic ecosystems (Conty and Bécares, 2013).

Microbial diversity is a key element to respond to the state of the ecosystem, and there are significant differences in microbial community diversity in different ecological environments (Wu et al., 2015; Pastorelli et al., 2021). In order to obtain more information about the bacterial community, the standardized processing method of row processing was used based on the Euclidean distance between the relative abundance of dominant species at each sample genus level, and the species clustering algorithm was average, based on the pheatmap package to draw the dominant. The clustering heat map of the dominant species based on the pheatmap package is shown in Figure 6.

At the genus level in South Taihu Lake, SM1A02, Holophaga and Acinetobacter, Bacterium enrichment culture clone B126 were preferentially clustered, and the abundance composition of the six samples between these two groups was similar, with SM1A02 and Holophaga having the highest abundance at S1. And the highest abundance was found at S2 for Bacteroides and Bacterium enrichment culture clone B126. At the genus level in North Taihu Lake, Candidatus Alyslosphaera and Nannocystis clustered preferentially before clustering with Nitrospira spp. The content of these three genera was mainly concentrated in N3, reflecting a high similarity.

Among the Degradation/Utilization/Assimilation pathways, most of the secondary pathways were in balanced abundance, with the highest abundance of Nucleoside and Nucleotide Degradation. In the pathway of precursor metabolite and energy production, fermentation and TCA cycle (tricarboxylic acid cycle) were in higher abundance. The above functional differences suggest that sediment microorganisms in Taihu Lake in the study area are involved in nutrient transport and transformation, and play an important role in lake water purification.

The physical and chemical indexes such as pH, TN, TP, and CODMn of the Taihu Lake show that the pollution degree in the north of Taihu Lake is higher than that in the south. And the pollution mainly occurred in summer. The pollution in southern Taihu Lake was relatively stable from 2019 to 2021. The microbial communities in sediments of the northern and southern Taihu Lake were studied. The results showed that the microbial community structure in sediment samples showed obvious spatial diversity and similarity. The difference is that the relative abundance content of each phylum is different at each sampling point. The diversity of microorganisms was inversely proportional to the degree of eutrophication, while the abundance of microorganisms was positively correlated with the level of nutrients in the study area. The functional differences indicate that the microorganisms in the sediments of Taihu Lake in the study area participate in the migration and transformation of nutrients, which plays an important role in the purification of lake.

Moshiri, G. A., and Crumpton, W. G. (1977). Interrelationships Between Certain Microorganisms and Some Aspects of Sediment-Water Nutrient Exchange in Two Bayou Estuaries. Phases I and II. U.S. Government Science and Technology Report.

Sangakkara, U. R. (1997). “Root dynamics and nutrient uptake efficiencies of mung bean as affected by organic matter and effective microorganisms,” in Proceedings of the 5th International Conference on Kyusei Nature Farming, Bangkok, 23–26.