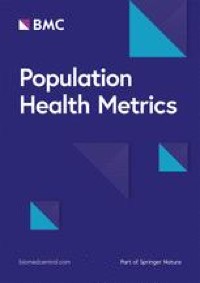 The number of deaths D reported for a given area and time period is assumed to be Poisson-distributed, with mean ({mathbb{E}})(D) and variance ({mathbb{V}})(D) satisfying the equality ({mathbb{E}})(D) = λP = ({mathbb{V}})(D), where P denotes the population denominator [1]. The age-specific or crude death rate R, defined as the ratio D/P, is usually multiplied by 100,000 and reported as a rate per 100,000 population.

where Z = G/P is gamma-distributed with mean y and variance v.

With n age groups, let Di denote the number of deaths for group i. The Di are assumed to be independent Poisson random variables, and the age-specific rates Ri are defined as the ratios Di/Pi, with means ({mathbb{E}})(Ri) = λi and variances ({mathbb{V}})(Ri) = λi/pi.

From Eqs. A4 and A5a, the lower limit L(y) can be resolved approximately from the lower tail probability of a gamma distribution with parameters α = y2/v and β = v/y, again with the convention that L(0) = 0.

For the upper bound, note that a unit increment in the observed number of deaths xj within group j results in the addition of the quantity wj/pj to the age-adjusted rate y = ∑(wi/pi) xi. Because such a unit increment could be realized in any of the n groups,

where κ0 = max{wj/pj}. From Eq. A4, the right-hand side in this last inequality is approximately equal to Pr[Z′ ≤ U(y)|y′, v′], where Z′ is gamma-distributed with mean y′ = y + κ0 and variance v′ = v + κ02. Thus, an upper CI limit U(y) can be resolved from the upper tail probability of a gamma distribution with shape parameter α = y′2/v′ and scale parameter β = v′/y′. Fay and Feuer [7] make the conjecture that the approximate gamma CI thus constructed remains conservative. Although this conjecture remains unproven, findings from the many simulation studies to date continue to support it, e.g., [4,5,6].

Tiwari modification. Tiwari et al. [8] developed a modification to the Fay–Feuer method described above by distributing an average increment 1/n uniformly across all age groups instead of a unit increment in a single age group:

However, the resulting CI sometimes fails to retain the nominal coverage level, e.g., [4].

Fay–Kim modification. Fay and Kim [10] more recently developed a mid-p version of the Fay–Feuer CI. A modification of exact CIs from discrete data, mid-p CIs trade-off guaranteed nominal coverage in all of the parameter space (which tends to result in overly wide CIs) for proximity to nominal coverage (and narrower CIs) for most parameter values.

For the mid-p interval, a solution to the following equations is sought:

Drawing B = b from a Bernoulli distribution with Pr(B = 1) = 1/2, Fay and Kim [10] define the mid-p version of the Fay–Feuer CI using the following gamma distribution:

Anderson–Rosenberg approximation. Anderson and Rosenberg [11] had introduced an approximation to the Fay–Feuer upper CI limit that alleviated the need to calculate κ0 = max{wj/pj}. Instead, the Poisson-gamma relationship in Eq. A1 is assumed to hold for an appropriately defined Poisson random variable Dadj corresponding to a crude rate that would have been equal to the age-adjusted rate R′, i.e., such that R′ = Dadj/Padj. Therefore, a “standardized” gamma random variable Gadj is defined as Z/(v/y), where the gamma-distributed Z has mean y and variance v. As a result, Gadj has mean and variance equal to y2/v. Define xadj = y2/v and 1/padj = v/y. If xadj was an integer, then there would exist a Poisson random variable Dadj with mean and variance equal to λ′ padj such that

Because y2/v will generally not be integer, xadj is defined as the nearest integer instead (although this is not strictly necessary), and the equality in Eq. A6 is assumed to hold approximately. Either way, one proceeds as for the crude rate to derive CI limits L(y) and U(y) for λ′ as the (a/2)-quantile of the gamma(xadj, 1/padj) distribution and the (1 − a/2)-quantile of the gamma(xadj + 1, 1/padj), respectively.

Exact intervals. When there is a constant scalar c > 0 such that pi = cπi for all i, the age-adjusted rate equals the overall crude rate, and the above CIs reduce to the exact gamma CI for λ = p−1 ∑λi pi where p = ∑pi and the total number of deaths D = ∑Di follows a Poisson distribution with mean λp. In particular, when y = 0, v = 0 and xadj is undefined. However, because the age-adjusted rate equals the crude rate in this case, the limits of all three approximate gamma CIs for the age-adjusted rate are defined to be those of the exact gamma CI for the crude rate, with p = ∑pi and x = ∑xi = 0. Thus, in this extreme case, L(0) = 0 and U(0) is the (1 − a/2)-quantile of the gamma(1, 1/p) distribution.

Furthermore, 1/padj can be expressed as follows:

since ﻿∑ξi = 1. Thus, like the Tiwari modification, the Anderson–Rosenberg construction reduces the CI width relative to the Fay–Feuer method:

Two questions emerge from the above derivations:

To partially answer question 2, note that the Anderson–Rosenberg CI would be narrower than the Tiwari CI if (but not only if) κ3 ≤ κ1, as that ensures

By definition, the condition κ3 ≤ κ1 is realized when

﻿which is equivalent to

This last condition indicates that the slope of the line from the simple regression of the weight-adjusted age-specific death rates wi (xi/pi) = (wi/pi) xi onto the weights wi/pi is negative or zero. This could be verified upfront for any set of age-adjustment weights (w1, …, wn) and population distribution (p1, …, pn), and it would be sufficient to ensure that the Anderson–Rosenberg CI will be narrower than the Tiwari CI. Of course, this leaves the issue of efficiency unresolved, as it would theoretically be possible for either the Anderson–Rosenberg or the Tiwari CIs to be so narrow as to fail to retain nominal coverage. The empirical simulations investigate situations where this may occur. In addition, these two CI methods are compared to the more recent Fay–Kim mid-p modification.