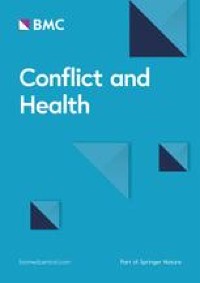 ARC and IDEO.org used an HCD approach to design the Asili intervention. Asili services were available to everyone in the communities of Mudaka and Panzi. Community members could access Asili in one of two ways: (1) by paying for a monthly membership (defined as an Asili member) or (2) by purchasing services individually (defined as an Asili user). Asili members received five 19-L jerry cans of water per day and subsidized prices for clinic appointments and basic medicines. Asili users paid higher fees for individual jerry cans of water and clinic services and medicine; however, access to Asili services was not otherwise restricted. The goal in charging for Asili services and memberships was to eventually develop self-sustaining services that would create jobs through social franchise opportunities, thus rebuilding livelihoods within the community whie also providing needed services.

There were two primary study sites, Mudaka and Panzi, both in Bukavu, South Kivu, DRC. Catchment areas for both study sites were determined by the local ARC team and were subsequently mapped using GPS ‘clickers’ and Google Earth. Mudaka was divided into six regions that were defined according to population distribution and geographic factors (“close to the market”, “close to the lake”, etc.), in order to accurately represent the local population. Panzi was divided into four regions, with three regions centered around planned Asili water points, and one centered around the planned Asili clinic.

Study data were primarily collected through household surveys administered to heads of household in families with under-five children; additional community input was collected through small focus groups during follow-up. Experienced field staff were hired from local communities and overseen by DRC-based data collection firms. Local staff helped with translation of surveys and focus group data and ensured cultural appropriateness. Before each round of data collection, the local team and university team researchers met for three days to practice surveys and review the protocol and ethics. All data collectors were fluent in French; most also spoke fluent Kiswahili and/or Mashi. Data was collected via surveys deployed on Nexus 7 tablets using the Research Electronic Data Capture (REDCap) mobile application. REDCap is a secure, web-based software platform designed to support data capture for research studies, providing (1) an intuitive interface for validated data capture; (2) audit trails for tracking data manipulation and export procedures; (3) automated export procedures for seamless data downloads to common statistical packages; and (4) procedures for data integration and interoperability with external source [15, 16].

Data collected from households included demographics of primary caregivers and children under-five, housing conditions, food security, and access to water, plumbing, and electricity. At follow-up, additional questions were asked about Asili membership, utilization and satisfaction with Asili services, and recommendations for improvement.

Survey instruments primarily relied on validated questions from Demographic and Health Survey (DHS) modules for DRC [17]. These modules were pretested in villages in the Bukavu area not participating in the study to assure appropriateness for this population. At baseline and follow-up, interviews were conducted in French, with occasional translation into Kiswahili and Mashi for better comprehension, as needed. Institutional Review Board approval was obtained from both universities.

Additional outcomes of this study included measures of disease incidence, as a proxy measure of child mortality. Maternally-reported diarrhea, cough, and fever in the preceding 14 days were used to represent incidence of diarrheal disease, pneumonia, and malaria, respectively, as the leading causes of under-five child mortality in DRC [18]. These proxy measures of child mortality and under-five health were originally intended as the primary outcome of our study, using a combination of self-reported data from primary caregivers and medical chart data. However, due to numerous unanticipated challenges obtaining chart data as well as difficulties with maternal recall in large and busy households, data quality was so poor as to warrant non-inclusion in these findings.

Data were stratified by Asili membership (member vs. non-member) and usership (user vs. non-user) during analysis in Mudaka and Panzi. Study sites were analyzed separately, for several reasons: Asili roll-out occurred in Mudaka a full year before roll-out in Panzi, Panzi is more urban than Mudaka, and the populations of the two areas are heterogenous, all making comparison not especially useful in terms of understanding the social enterprise model in this setting.

Market segmentation analysis can be used to observe trends in uptake of a product or intervention, such as Asili. A form of exploratory data analysis, market segmentation uses algorithms to divide populations into distinct subgroups with common characteristics that can be described in order to understand use of a product or service [19, 20]. A common method to create these groups is through k-means clustering, a form of exploratory unsupervised learning that uses an iterative algorithm to create distinct clusters based on variables of interest. These clusters can then be described in order to characterize the subgroups that compose the initial population.

In Mudaka and Panzi, k-means clustering used data collected at baseline to create consumer profiles within these communities and assess which profiles were most likely to access Asili services. Land and animal ownership, electricity, type of toilet, and self-reported food scarcity were machine-selected to create the clusters for both study sites, with Mudaka additionally using drinking water and roofing material in its algorithm, while Panzi additionally used flooring material.

Clusters were organized by increasing proportion of households reporting use of Asili services, and trends across the different demographic variables were observed. All of these characteristics, except for food insecurity, are proxy indicators of wealth used in the DHS wealth index to measure economic status [21]. Thus, we interpreted trends across these variables as reflective of differences in Asili usage by household wealth. Households with missing cluster variables or unknown village data at baseline were excluded from the analysis. Variables without notable trends across clusters, including drinking water and roofing material for Mudaka and type of toilet for Mudaka and Panzi were not reported.