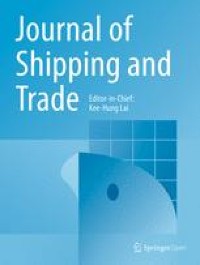 Most of the Helsinki-Tallinn vessels are very fast, so the vessels consume much fuel compared to the amount of cargo. According to EMSA Thetis monitoring, reporting and verification of carbon dioxide emissions from maritime transport (MRV) report, in 2019, the emissions of the present ro-pax vessels vary from 485 to 733 kg CO2 per nautical mile (EMSA Thetis-MRV 2021).

In Decarbonising shipping” section, we went through how emissions from shipping can be reduced through ship design and technological development, fuel solutions, and changing the speed, size, or type of cargo of a ship. These measures also have their costs and implications more broadly, in some cases even to customer satisfaction.

It is tough to estimate how the shipping industry will adapt to the new GHG-emission regulations. Some indication can be obtained by looking at the Sulphur Directive, which came into force in 2015 in the Baltic Sea and was suspected of placing a heavy financial burden on shipping in the Baltic Sea (see Repka et al. 2017; Zis and Psaratis 2017). It is interesting to note that in Helsinki-Tallinn traffic, the volumes remained on a growing trajectory. This is mainly due to the increasing frequency of the traffic, being very attractive to truck traffic with high-value goods for consumers and industry.

The most economically viable options for reducing GHG emissions is in new buildings to reduce fuel consumption, such as designing the bottom of the ship, etc., that will simultaneously reduce bunker costs and emissions. Therefore, it is expected that the world maritime fleet will eventually produce lower emissions for economic reasons. On the other hand, the higher the charges come with emissions trading, the faster it will affect the fleet’s renewal.

Low-emission fuels are still considerably expensive today compared to most fossil fuels, but as production increases and, for example, through emissions trading, the prices will fall (Solakivi et al. 2021). However, it is still impossible to estimate the difference in the price of new green fuels to fossil fuels in ten years’ time.

One of the vessels between Helsinki and Tallinn is already running on LNG and the next will be in service in the summer of 2022. However, it is possible that the current fuels will not achieve sufficient emission reductions; it depends on IMO and EU regulations. If this is the case, ships can be converted to hydrogen, methanol or ammonia. Even new ships, e.g. with electricity, can be considered. However, this will require a considerable amount of capital for investments.

Perhaps the most significant change in emission reduction measures could be achieved by reducing the speed of the vessels. It is cheap and quick to implement. Therefore, in the Helsinki–Tallinn route there should be considered a speed reduction as a short-term measure. A 22-knot speed limit would reduce emissions from the passenger ferry vessels by 11% and an 18-knot speed limit by 31% (Heikkilä 2020).

Slowing down the cruising speed reduces the number of times a ship can cross the Gulf of Finland per day, thus reducing the attractivity of the service to passengers and cargo. It may even be necessary to add ships to the route to carry the same number of people and cargo, which might increase GHG emissions. When studying impact of introduction of sulphur regulation Raza et al. (2019) found that slow steaming was used only in one out of 11 shipping lines in their study. They conclude that for ro-pax and ro-ro segment bunker prices, rigorous competition and, most important, different service quality requirements have significantly restricted the potential implementation of slow steaming.

If the costs for travelling in the high-speed ro-pax ferries are raised, there is an option that the traffic divides to faster ships for the business traveller, where ticket prices are higher, and slower ships for cargo and cruise passengers. Fast transport can also be accomplished by catamarans, see e.g. Baltic Transport Journal (2021). However, their challenge is unreliability in difficult weather conditions such as storms and winter ice conditions, or even by air (helicopters and aeroplanes).

If the fuel price rises sharply, ticket prices will have to be raised significantly, which is likely to lead to ever-decreasing leisure passenger numbers. In cargo, German or Swedish lines can also compete against the line between Helsinki and Tallinn. It is also possible that some of the cargo will be containerised, and the ship type will change completely to container vessels. In that case, passengers would be transported either by slower cruise ships or fast, lightweight vessels.

In addition to the tightening environmental standards, there are other external variables, the most important of which in the coming years for Helsinki-Tallinn traffic is Rail Baltica (RailBaltica 2021). The growth of rail transport capacity in Europe, particularly the Rail Baltica ending in Estonia, will make it possible to combine sea and rail transport in a new way. Furthermore, the Covid-19 pandemic has significantly increased, e.g. direct rail connections from Asia to Europe, which will likely be part of the transport offer palette. An interesting aspect is that if the cargo arrives in containers by rail and at Rail Baltica from Poland to Tallinn by rail, container ships could be on the Helsinki-Tallinn route.

The most significant impact on the future of Helsinki-Tallinn traffic in next few years will be whether passenger traffic returns to the level of 2019 within a few years and continues to grow on a growth trajectory. As the traffic income between Helsinki-Tallinn is mainly dependent on passenger volumes (in total 82%), and Covid-19 pandemic did not have a noticeable effect on cargo volumes, we will concentrate on the potential recovery of the passenger volumes.

The second most significant impact on the future of the traffic will be tightening environmental regulations. The effect will be seen after 2025, but the shipping companies have to prepare themselves for that already in the next few years.

If traffic rises rapidly on a growth trajectory, new vessels and more environmentally efficient measures will be easy and likely to enter traffic. However, if the increase in traffic takes several years and vessels are hit by strict environmental restrictions, it is likely that traffic volumes will not return to previous levels, the shippers might find other routes and operating models.

These two factors, how strict the environmental regulations are and whether the volumes of passenger traffic in the Helsinki-Tallinn route return to the situation before 2020, have been chosen as a basis for the analysis. We will study the development of Helsinki-Tallinn traffic through the following framework:

Figure 7 presents the scenarios we have estimated for the situation in 2030. We chose question 1 (passenger traffic volumes) on x-axis and question 2 (effect of environmental regulations) on y-axis. It is estimated that cargo volumes will remain in the present or slightly increasing stage. The low scenario is based on the minimum level of the passenger volumes, i.e. the low number of passengers due to the start of pandemic in 2020 around 4–5 million passenger per year; and the high level is equal to the number of passengers in 2019, i.e. the peak before the pandemic broke in, around 9 million passengers per year.

The requirements of GHG emissions assumed that 5 per cent decrease can be reached with minor changes in the traffic, e.g. technological solutions to increase fuel efficiency, but 25 per cent decrease in GHG emissions can be reached only by making bigger changes in the technology, fuel or operations. These figures are assumed based on estimations of Bouman et al. (2017) of potentials of various GHG reduction measures.

The number of GHG reductions and the number of passengers are only indicative. In reality, the pressure for changing business concepts comes from emission reduction costs and income from passenger tickets and onboard sales.

If passenger traffic volumes do not increase to the level before pandemic and environmental standards become more stringent requiring more than 25% GHG decrease, the profitability of the traffic will not recover and there will likely be a major change in traffic patterns with a great fleet renewal. It is assumed that only some of the current high-speed ro-pax ferries will continue to operate due to their expensive cost structure. Instead, there may be slower cruise ships in traffic, and, above all, the growth in freight traffic will be channelled into slow ro-ro vessels. It is also possible that as freight traffic grows and Rail Baltica opens, some of the cargo will shift to containers.

If passenger traffic volumes increase to the level before pandemic and climate standards are tightened requiring more than 25% GHG decrease, these climate standards will be considered in the fleet’s renewal, and there is financial capacity to renew the fleet. The new fleet is likely to use new technology and green fuels. In this case, it can be assumed that work-related passengers will still demand a fast cruising speed, but even a slower speed will suffice for recreational passengers and cargo. Therefore, it is expected that new high-speed catamaran-type vessels, with alternative fuels, will enter high-speed traffic—unless high-speed traffic is wholly shifted to air transport. The probability of this scenario is also related to the level of inflations: higher the inflation level, the more demanding it is to invest on new fleet. Therefore, in case of high inflation, the reduction on fuel consumption in new vessels has be very significant.

In addition to the fast vessels, there will also be slower cruise-type passenger and freight traffic that can reduce emissions at slower speeds.. It is assumed that there will be more vessels for also only cargo traffic that would only run between Vuosaari and Muuga, in addition to the present ro-pax traffic between the city centres. In contrast, passenger traffic will continue in the ports of Helsinki and Tallinn city centre. It is also possible that as freight traffic increases and Rail Baltica opens, some of the cargo will move to containers.

If passenger traffic volumes do not increase but remain below the 2019 level on approximately 4–5 million passengers per year for at least the next ten years, there will be extra traffic capacity in fleet, resulting in a reduction in ship capacity. It is beyond this research to consider how capacity adjustment takes place: either by one company withdrawing the traffic or number of vessels decreasing. However, it is plausible that if environmental standards do not become more stringent, on a few of the existing ro-pax ferries will continue, and growth will take place primarily on the capacity of pure cargo vessels of the Vuosaari-Muuga line.

Suppose traffic increases to or above the level of 2019 over 9 million passengers but environmental standards are not tightened for the current ro-pax vessels. In that case, it is assumed that the current traffic concept, based on mainly income from passengers and which combines passenger and cargo traffic on the same ships, will continue. In the future, it is likely that slightly larger vessels may replace present vessels. Cruise-based ships and fast passenger car ferries will continue in the city centres, while freight traffic will also increase in cargo ports, i.e. on the Vuosaari-Muuga line. In other word, there is growth in every sector.

By Ulla Tapaninen and Riina Palu