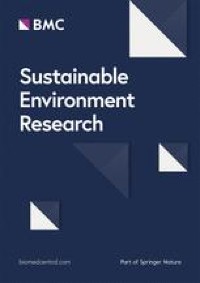 Characterization of CS and CST composites

The physicochemical properties of the as-synthesized sample surfaces were determined by obtaining nitrogen adsorption-desorption isotherms with respect to the surface area and pore size distribution. The N2 adsorption-desorption isotherms and corresponding pore size distribution curves of the as-synthesized samples are shown in Fig. 2a and b. The SBET and pore volume (Vpore) are shown in Table 1. The results showed that most of the samples presented a relationship among SBET, the degree of crosslinking, and whether exchange occurred between the sample surface and ammonia solution. Figure 2c and d show that the proportion of cavities in the samples exchanging ammonia solution was greater than that of the others. Figure 2a and b show that the N2 adsorption-desorption isotherms of the samples are separated by a different type. According to the International Union of Pure and Applied Chemistry classification system, the adsorption-desorption isotherms of CS are type IV, suggesting the existence of mesopores (pores with diameters between 2 and 50 nm), and the isotherms of the CST composites are type III, suggesting that they are not porous [22]. The samples with a higher crosslink yield and more contraction during ammonia solution treatment had a lower SBET. This phenomenon can be seen in Table 1.

The structural changes of CS in the presence of TiO2 were evaluated by FT-IR spectroscopy. Figure 3a and b show the spectra used to determine the chemical structure of the as-synthesized CS and CST samples. The deacetylated chitosan showed vibrations at approximately 1650 and 1560 cm− 1. These peaks were assigned to amide group I associated with C=O stretching vibrations and amide group II resulting from N-H bending vibrations. Additional –CH2 bending peaks were observed at 1380 and 1324 cm− 1. The saccharide structure showed anti-symmetric stretching of the C–O–C bridge at 896 and 1158 cm− 1, and skeletal vibrations involving C–O stretching occurred at 1086 and 1028 cm− 1 [23,24,25]. The peaks at 2371 cm− 1 were typical of C-H stretching. The stronger intensity of the C-H stretching band at 2371 cm− 1 confirms the introduction of aliphatic chains from glutaraldehyde by crosslinking [26]. A wide strong band was shown at 3478 cm− 1 due to the stretching of OH, and this band overlapped the band attributed to the N-H stretching of amide [27]. The peak at 1400 cm− 1 is attributed to C-H bending vibrations in the CH2 group, and the typical peak at 1339 cm− 1 is attributed to C-H bending vibrations in the CH3 group [28].

The peaks at 1636 and 662 cm− 1 were attributed to H-O-H bending and Ti-O-Ti stretching vibrations, respectively, which are typical characteristics of TiO2 [29, 30]. In Fig. 3b, the FT-IR spectrum of CST crosslinking with glutaraldehyde showed an increase in the intensity of the amide group peak, which might have resulted from the interaction of Ti+ 4 with the amide group of chitosan [31]. In this study, TiO2 signals were not observed from approximately 400 to 662 cm− 1. Ali et al. [32] reported similar patterns on pure CS and CS@TiO2 nanocomposites in their FT-IR spectra. Therefore, it was suggested that TiO2 existed on the surface of chitosan without affecting its chemical structures.

The thermal stability of CS and CST composites was assessed through Differential Scanning Calorimetry/TGA studies. Figure 4 shows the thermal stability and degree of crosslinking of the as-synthesized samples. As shown in previous studies, the weight losses below 100 °C were attributed to the desorption of water. Conspicuous weight losses from 180 to 400 °C were observed as the thermal degradation of CS progressed; notably, the introduction of a crosslinked structure was supposed to enhance thermal stability [33, 34]. In our results, noticeable weight losses appeared from 170 to 400 °C, as shown in other studies. The apparent weight of the residues of CST may indicate the containment of TiO2; the 3%CST-X sample was more thermostable than other samples. This behavior was attributed to the presence of TiO2. The weight loss percentage is proportional to the degree of crosslinking, with a higher glutaraldehyde concentration having higher thermal stability.

The adsorption capacities of all samples are shown in Table S1. Among the four different initial concentrations, most of the samples had a better adsorption capacity when the initial concentration was 300 ppm. Two-thirds of the samples showed an improved adsorption effect after exchange with the ammonia solution; for instance, the 3%CS, 5%CS, 5%CST, and 7%CST samples after the exchange treatment had better adsorption capability. The addition of TiO2 had a positive effect on Cu adsorption, and most of the CS samples with TiO2 composites had better effectiveness. Freundlich isotherm models were used to fit the isotherms of the CS and CST composite samples. The fitting curves of the Freundlich isotherm models are shown in Fig. 5. The magnitude of KF is a relative measure of adsorption capacity. The constant n is a parameter related to the intensity of adsorption, which varies with the heterogeneity of the adsorbent. According to Thommes et al. and Mishra and Patel [22, 35], for favorable adsorption, the n values should be in the range of 1–10. Statistical analysis based on the effect of the initial Cu2+ concentration in solution on the adsorption capacity (qe) is shown in Table 2. The p-value of the degree of crosslinking (3, 5, 7%) and initial Cu2+ concentration was lower than 0.001. Thus, the degree of crosslinking and initial Cu2+ concentration can also affect qe. Glutaraldehyde crosslinks the amino and hydroxyl groups of chitosan. A lower cross-linking degree has a positive impact on the effectiveness of copper ion adsorption without causing a significant decrease in adsorption capacity. This is because relatively abundant amino and hydroxyl groups existed on the chitosan network structure. However, a higher concentration of glutaraldehyde blocks amine groups, which can limit the sorption capacity of the sorbent. The amine (−NH2) groups [FTIR peaks at 1560 and 3478 cm− 1 (overlap with the stretching of –OH groups)] on CS chains serve as coordination sites, thereby playing an important role in the adsorption capacity and stability of CS because NH2 groups in CS work as copper adsorption sites [28]. Therefore, we chose the composite with the best adsorption capacity (3%CS-V, 300 ppm Cu2+) to test the effect of the initial pH value of the solution on Cu adsorption; the result is shown in Fig. 6. At low pH values from 1 to 3, the adsorption of Cu on the CST composite was relatively low because CS was unstable and tended to solubilize, and the acrylate groups were protonated. This makes the composites unable to form complexes with Cu2+. The highest absorption capacity occurs at pH 4.5 on the CST composite because more carboxylate groups are ionized, which results in an increase in the affinity for copper cations via electrostatic interactions. Grande-Tovar et al. [27] reported a similar finding; the highest adsorption capacities for copper and lead ions were obtained at pH 4 on CS@grafted-polyacrylic acid.

After the adsorption test, the best condition (300 ppm Cu2+) was chosen to perform the antimicrobial experiments using a ZOI assay to examine the antimicrobial efficacy, as shown in Figs. 7 and 8. The average width and area are shown in Table S2, and linear regression examining the relationship between the area of the ZOI and other variables divided bacteria into two kinds, as listed in Table 3. In the linear regression study, we set the degree of crosslinking and initial Cu2+ concentration as categorical variables. First, the results against E. coli in Table 3 showed that both the addition of TiO2 and exchange with ammonia solution had negative directivity. These two treatments decreased the porosity and adsorption capability of the composites, which led to a decrease in their antimicrobial efficiency. The estimated factor (B) of the initial Cu2+ concentration was high, which indicated that a higher initial concentration of Cu2+ could enhance the antimicrobial efficiency. According to Table 3, the antimicrobial efficacy was affected by copper ions more than TiO2 addition and glutaraldehyde concentration. In addition, in accordance with the estimated factor, B (negative means antimicrobial effect compared to the reference group), and p-value (< 0.01* means statistically significant) in Table 3, TiO2 addition and exchange with ammonia solution had a more significant effect on the antimicrobial efficiency against S. epidermidis [Gram+, TiO2 addition, B = − 33, p-value < 0.001; exchange with ammonia solution, B = − 38, p-value < 0.001] than against E. coli [Gram-, TiO2 addition, B = − 5, p-value = 0.771; exchange with ammonia solution, B = − 1, p-value = 0.948]. Perelshtein et al. [36] also found that crystalline TiO2 nanoparticles demonstrated a more significant antimicrobial effect on S. aureus (Gram+) than E. coli (Gram-) under visible light, which is relevant to carotenoids (a yellow pigment produced by S. aureus) acting as photosensitizers for TiO2 photocatalysis. S. epidermidis also produces white pigments of a xanthophyllic nature [37], and these pigments may also act as photosensitizers for TiO2 photocatalysis. In addition, the exchange treatment with ammonia significantly increased the Ti content of the CST composites (see Section 3.1, Figs. S3 and S4). This treatment enhanced the antimicrobial efficiency of CST composites against S. epidermidis.

Similarly, we used untreated wastewater from a PCB factory to conduct experiments with the composite samples with the best adsorption capability (3%CS-V) and the best antibacterial efficiency (7%CST-V). The ZOI results of the industrial wastewater without dilution and after 50-fold dilution are shown in Fig. 9, Tables S3, S4 and S5, revealing excellent antimicrobial efficiency against S. epidermidis and E. coli.