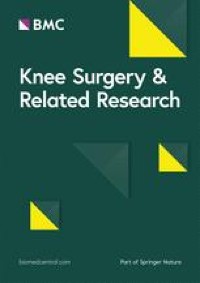 Patients with at least two ACL reconstructions that failed and who had significant enlargement and confluence of tunnels in the medial tibial plateau and underwent revision ACL reconstruction associated with ALL reconstruction with the tibial tunnel for the ACL performed from the lateral plateau between 2017 and 2019 were included. In the study period, 14 re-revision surgeries were performed, but this procedure was indicated only if a performing a medial tibial tunnel was not possible and when a single-stage revision was planned. Patients in whom surgery with tibial tunnel through the medial plateau was possible submitted to reconstructions associated with posterior cruciate ligament (PCL), medial collateral ligament (MCL), and posterolateral corner (PLC), or associated osteotomies for axis or slope correction were not included.

All patients were evaluated preoperatively with knee weight-bearing radiographs, long-leg radiographs to assess the limb axis, lateral tibial radiograph to measure the slope, tomography to assess the positioning and confluence of previous tunnels, and magnetic resonance imaging, in addition to a careful physical examination for ligament instabilities of the knee, which was repeated after anesthesia to confirm associated injuries (Fig. 1).

ACL surgery with the lateral tibial tunnel was planned and indicated when there were two or more previous tunnels in the medial plateau and when the construction of a third tunnel could make an adequate reconstruction impossible. It was considered when there was already confluence between the previous tunnels, when the bone bridge between the tunnels was smaller than 3 mm and a new perforation could weaken the walls and generate confluence, and when the perforation in the right position would connect the previous tunnels. Thus, once the lateral tunnel was planned, the medial part of the plateau was not violated during surgery. In all situations other than those previously mentioned, this technique was not indicated and a conventional medial tibial tunnel reconstruction was performed. Relative contra-indications of this procedure include patients with previous fixations materials and lateral tunnels that could impair the new tunnel for the revision ACL reconstruction.

Patients were placed in horizontal dorsal decubitus on a radiolucent table so fluoroscopy could be used if necessary. Patients were operated under spinal anesthesia, with a tourniquet placed at the root of the thigh.

The femoral tunnel for combined ACL and ALL reconstruction was performed using the outside-in technique. Tunnel entry occurred posterior and proximal to the lateral epicondyle, and the tunnel exit in the articular region of the ACL femoral footprint, closer to the anteromedial bundle. After drilling, the tunnel was cleaned, removing any remaining grafts and screws from previous surgeries. It is important to leave the tunnel walls with bleeding bone for better graft integration. In the case of very sclerotic walls, “microfracture” type perforations in the inner part of the tunnel wall can be performed.

To perform the tibial tunnel through the lateral plateau, an access immediately lateral to the tibial crest is performed. The direction of the tunnel must be as vertical as possible to avoid sharper angulation from the graft in the joint. To perform the tunnel through the lateral access, it is important to detach the muscles from the anterolateral region of the tibia to access the local bone. The tibial guide with 60° of angulation is then positioned in the center of the ACL footprint, entering the anterolateral portal (Fig. 2). The passage of the guidewire must be performed calmly to prevent it from slipping into the proximal tibiofibular joint since the tibia is straighter in this region compared with the medial plateau; then the exit of the guidewire from the joint is checked with the arthroscopy camera. After drilling the tunnel, the camera must be placed inside the tunnel to check the integrity of the walls. Next, a bone shaver must be placed inside the tunnel to flatten the posterolateral region of the tunnel entrance at the joint. This step is important for the graft curvature to be as smooth as possible.

Tibial tunnel for ALL reconstruction

The tibial tunnel for ALL reconstruction should be performed between Gerdy’s tubercle and the fibular head, about 5–10 mm below the lateral tibial plateau. The tunnel must be performed from lateral to medial, exiting posteriorly to the current anterolateral tunnel and the previous anteromedial tunnels. In case of doubt, fluoroscopy can be used, although it has not been necessary to date in our clinical practice. After making the tunnel, the camera must be placed inside it to check the integrity of the walls.

After performing the tunnels, the Achilles tendon allograft is passed from the tibia to the femur, leaving the bone plug in the tibial tunnel and the part for ALL reconstruction outside the femoral tunnel. Initially, femoral fixation is performed in the combined femoral tunnel with an interference screw from the outside-in. At the time of fixation, it is important to keep the entire bone plug inside the tibial tunnel. After femoral fixation, the tibial tunnel of the ACL is also fixed using an interference screw and in 30° flexion of the knee. Finally, fixation of the ALL is performed. The remaining Achilles graft is passed under the iliotibial tract and inserted into the tibia. Fixation is performed with an absorbable interference screw from lateral to medial with full extension and neutral knee rotation (Figs. 3, 4).

All patients were allowed partial weight-bearing as tolerated from the initial postoperative period. Progression to full weight-bearing was allowed when patients had good quadriceps control. Gaining range of motion was also authorized from the first postoperative period, without using any knee immobilizer. The return to contact sports was authorized at least 12 months after the operation, as long as the patient was free of pain, without effusion, with a complete range of motion and good muscular control.