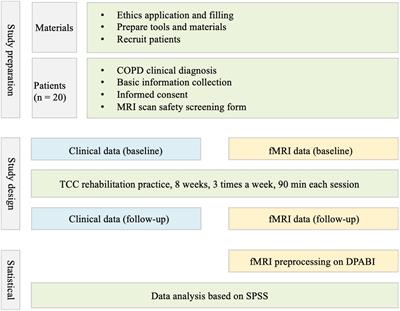 According to the World Health Organization (WHO), chronic obstructive pulmonary disease (COPD) has become the fourth largest chronic non-communicable disease and is predicted to be the third leading cause of mortality by 2030 (Higginson and Parry, 2018), which seriously threaten human health and survival in the globe. COPD is a chronic inflammatory lung disease that causes airflow obstruction. It is accompanied by a variety of clinical symptoms including coughing, shortness of breath, and chest tightness, which might lead to poor quality of life, impaired social function, and death (Watz et al., 2008).

Brain imaging evidence has shown that patients with COPD exhibit significant atrophy in the frontal lobe, cingulate cortex, anterior insular lobe, and hippocampus, along with aberrant brain function, with decreased cortical volume and density in the local brain structures (Zhang H. et al., 2013; Cleutjens et al., 2017). A recent study using fMRI observed that the functional connectivity between the right superior temporal gyrus, right inferior frontal gyrus (IFG), right paracentric lobule, and the right cingulate gyrus in patients with COPD were lower than those in healthy subjects (Li et al., 2020). Another PET study also found a similar abnormality, showing that the cerebral perfusion of the frontal lobe and parietal lobe were significantly lower in patients with COPD relative to healthy individuals (Ortapamuk and Naldoken, 2006). These studies suggest extensive abnormalities of anatomical structure and functional organization in patients with COPD.

Tai Chi Chuan (TCC), a typical mind-body integrative practice based on Chinese traditional culture, is regarded as an alternative and complementary medication. It emphasizes the “unity of body and mind.” Some studies found that TCC played an important role in “cultivating the mind” (Dechamps et al., 2009). This form of aerobic exercise requires the brain to be in a highly focused and relaxed state, coupled with rhythmic breathing regulation. Since it involves multiple components, including mindfulness, aerobic exercise, and breathing training, it could reshape the brain structure and alter brain function associated with optimized cognitive function and emotional health (Wei et al., 2016; Zhang et al., 2019; Yao et al., 2021). Previous studies demonstrated the role of physical exercise in improving clinical symptoms in patients with COPD (Emery et al., 1998; Ngai et al., 2016). However, the clinical efficacy of integrating routine treatment of COPD with TCC practice remains largely unknown. The neural mechanism underpinning its effects is also not clear.

With the development of resting-fMRI, degree of centrality (DC) has recently gained great attention in clinical studies. This graph-based measurement of network organization reflects the number of instantaneous functional connections between a region and the rest of the brain within the entire connectivity matrix of the brain (Guo et al., 2016). It has been widely used in neurological disorders, such as COPD, Parkinson’s disease, Alzheimer’s disease, and schizophrenia (Wang et al., 2019; Li et al., 2020; Rong et al., 2021). The DC approach was applied here to investigate altered brain functions after intervention in patients with COPD who received TCC rehabilitation practice. Moreover, we examined if the altered brain function was associated with the improved clinical symptom.

Twenty patients with COPD were recruited from the Department of Respiratory Medicine, Guang’anmen Hospital, China Academy of Chinese Medical Sciences from January 2019 to December 2019. The final sample included seventeen patients since three of them dropped out in the follow-up assessment.

The Global Initiative for COPD in 2019 (GOLD 2019) guidelines were used as clinical diagnosis of COPD. Mild to moderate COPD. The inclusion criteria were as follows: (1) patients aged from 55 to 80 years; (2) patients who had no regular exercise in the past 6 months. The exclusion criteria are as follows: (1) patients with history of hearing or vision problems, physical injury, seizures, metal implants, head trauma with loss of consciousness, or pregnancy; (2) patients with severe pulmonary diseases with somatic comorbidities such as cardiovascular, liver, kidney, and hematopoietic diseases; (3) patients with severe bone and joint diseases or osteoporosis; (4) patients with neurological and psychotic disorders, such as Alzheimer’s disease, psychosis, and emotional disorders, etc.; and (5) patients who cannot follow the doctor’s advice or examination as planned.

All patients received routine treatment combined with TCC practice for 8 weeks. In the routine treatment, inhalation preparation was used regularly according to the GOLD 2019 guidelines. TCC practice intervention lasted for 8 weeks, three times a week. Each session included a 20-min warm-up exercise, 10-min whole-body exercise, 55 min of 24-style TCC, and 5 min of cool down. All patients were divided into three groups supervised by skilled TCC instructors (Figure 1).

Figure 1. The routine of study.

The statistical analysis was performed on Statistical Package for the Social Sciences (SPSS) 26.0 (IBM Corp., Armonk, NY, United States). Regarding clinical characteristics changes, the CAT and mMRC scores were in line with normal distribution. Thus, a paired-samples t-test was conducted to analyze symptom improvements before and after TCC rehabilitation practice. As for alterations in brain functions, Gaussian random field (GRF) correction (voxel p < 0.05, cluster p < 0.05) was performed on DC values after the paired-samples t-test, and the brain regions with significant alterations were extracted. Moreover, Spearman rank correlation was used to analyze correlations between DC value alterations and clinical improvements. Statistical significance was defined as p < 0.05.

Alterations in Degree of Centrality After Intervention

To explore the neural mechanism for clinical symptoms improvements, we calculated the correlations between DC changes and clinical symptoms improvements. The brain regions significantly decreased in DC after intervention were used as regions of interest (ROI). The decreased values were extracted from all patients. As shown in Figure 3, the correlational analysis indicated that decreased DC in the IFG was positively associated with CAT improvements (r = 0.80, p < 0.05).

To our knowledge, this was the first study to investigate the effect of TCC practice on brain function associated with clinical symptoms improvements in COPD. We found that routine treatment integrating with TCC rehabilitation practice could significantly improve pulmonary symptoms measured by CAT in COPD. Moreover, DC values were decreased in the right IFG, right middle frontal gyrus, bilateral cingulate cortex, bilateral precuneus, and right precentral gyrus after the treatment. Intriguingly, the improved pulmonary symptoms were positively associated with the decreased DC value in the IFG, which suggested that IFG might be the key brain region related to the neural mechanism of the effects of routine treatment integrating with TCC practice on COPD. These results demonstrated the therapeutic effect of traditional body-mind regulation techniques on COPD. Most importantly, these findings are of great implications for the treatment of COPD from a Chinese culture-based approach.

In this study, the most intriguing finding was that the decreased DC value of the right IFG after the intervention was associated with chronic obstructive pulmonary symptoms measured by CAT, which suggested that the neural mechanism of routine treatment integrated with TCC practice on COPD decrease DC values in the IFG. Mounting evidence has demonstrated that IFG plays an essential role in pulmonary function and respiration. In healthy adults, the respiration volume was negatively associated with the blood-oxygen-level-dependent (BOLD) signal in the IFG, superior/middle temporal gyrus, inferior parietal lobule, and visual cortex (Yuan et al., 2013). For immigrants who are adapted to high altitude, their impairments in vital capacity were correlated with increased volumes in the right middle frontal gyrus and right parahippocampal gyrus (Zhang J. et al., 2013). Due to the important role of IFG in pulmonary function, the impairments of pulmonary function in COPD may be closely associated with the abnormalities in the IFG anatomy and function, which is consistent with previous studies. A resting-state fMRI found that compared with healthy controls, functional connectivities between the supplementary motor area and the right IFG, anterior cingulate gyrus, right insula, and limbic lobe were decreased in patients with COPD (Li et al., 2019). Another MRI study used voxel-based morphometry and observed that the gray matter density of the right IFG was reduced in patients with COPD. In addition, patients with severe symptoms of COPD exhibited more extensive reductions than those with moderate clinical symptoms (Yin et al., 2019).

Although this study has potential significance, its main limitations should be acknowledged. First, the sample size was relatively limited. A larger sample size of replication studies is needed in future studies. Second, this study lacked a control group with routine treatment. The alterations in the clinical symptoms and DC values may be caused by both the routine treatment and TCC practice. Thus, caution should be taken when concluding the neural mechanism of TCC practice in patients with COPD. Future studies should use randomized controlled trials to further explore the effect of mind-body practice in the treatment of COPD.

This study found that an 8-week integration routine treatment with TCC practice significantly improved lung function in patients with COPD. The right IFG might be a key brain region to contribute to the neural mechanism underlying the integration of routine treatment with TCC intervention on clinical symptoms of COPD. These findings provide neurological evidence for treating COPD rehabilitation practice with mind-body practice based on Chinese culture to some extent, which also advances the understanding of the efficacy of TCC as the adjuvant technology from a neuroscience perspective.

The studies involving human participants were reviewed and approved by the Guang’anmen Hospital, China Academy of Chinese Medical Sciences. The patients/participants provided their written informed consent to participate in this study. Written informed consent was obtained from the individual(s) for the publication of any potentially identifiable images or data included in this article.

G-XW and GL designed the study, reviewed, and revised the manuscript. TY, LZ, QT, L-ZC, and XY were responsible for recruiting the patients, performing the clinical rating, and collecting the clinical data. HS, L-ZC, and ZH cleaned data and did the statistical analysis. HS and G-XW wrote the manuscript. All authors contributed to the article and approved the submitted version.

We thank everyone who volunteered to participate in this study.