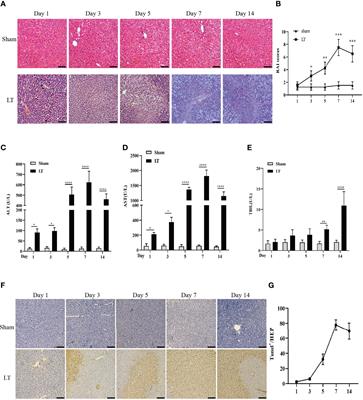 Orthotopic liver transplantation is the only effective therapy for acute liver failure and end-stage liver disease (1, 2). Immunotherapies significantly attenuate the acute rejection (AR) of liver allografts, but they also cause a series of complications including drug-induced liver injury, tumor recurrence, and severe infection (3, 4). Therefore, novel therapeutic strategies for alleviating the severity of acute rejection and minimization or eliminating immunosuppression are required. Neutrophils are critical in the pathophysiology of both ischemia–reperfusion injury (IRI) and AR of liver transplantation. They are the major amplifiers of hepatic IRI as well as the AR associated with liver transplantation (5–7).

Neutrophil extracellular traps (NETs) are net-like structures formed by neutrophils. They are composed of nuclear DNA studded with granule proteins, histones, and cytoplasmic antimicrobials (8, 9). Although a previous study established that NETs have a role in a variety of liver diseases, including liver IRI, alcohol-induced liver disease, and hepatocellular carcinoma, the mechanism by which NETs cause AR following liver transplantation requires additional investigation (10, 11).

Toll-like receptor 4 (TLR-4) is expressed by a variety of immune-related cells in the liver (12). TLR-4-mediated innate immune responses are triggered upon AR of liver transplantation and result in the release of inflammatory cytokines via activation of MAPK signaling, followed by induction of liver inflammation (13). Therefore, the endogenous TLR-4 ligand promotes AR-associated liver inflammatory responses (14).

This study was approved by the Ethics Committee of Animal and Human Experimentation of Chongqing Medical University. All human subjects signed informed consent for participation in this study, and all experiments were performed in accordance with the Declaration of Helsinki guidelines. Efforts were made to minimize animal distress and pain, and we used a small number of animals based on the 3Rs principle.

Peripheral blood samples were obtained from 13 liver transplant recipients. Liver transplantation recipients were handled according to institutional protocols by experienced transplant clinicians. Blood tests such as liver function tests, full blood examination, and serum immunosuppressant levels were performed regularly to monitor the clinical course. Additionally, 10 ml of blood was on post-transplant days of 1, 3, 7, 14, and 28 for NET investigation.

Samples were obtained from antecubital veins in vacuum blood collection tubes. Serum was centrifuged at 2,000×g for 10 min, within 1 h of collection, aliquoted, and stored at -80°C for assaying. Human peripheral blood neutrophils were obtained using previously reported Ficoll-Dextran techniques, and purified neutrophils (>95%) were analyzed using flow cytometry and manual counting for CD11b and Ly6G expression. Trypan blue was used to determine the viability of neutrophils (>95%).

Glycyrrhizin is a potent inhibitor of HMGB1. Glycyrrhizin can bind directly to HMGB1 and does not affect other chemokines. After 24 h of treatment with glycyrrhizin (15 mg/kg), rats were treated with LPS.

Separation of Cytoplasmic and Nuclear Extracts

To stimulate neutrophils, PMA (100 nm; Beyotime, Shanghai, China) was supplemented to the media after which 4 h of incubation in a 5% CO2 environment at 37°C was done. The medium was then gently aspirated and replaced with new precooling PBS (calcium and magnesium-free), and the remaining adhesions were collected by scrapings. The collected cells and NETs were transferred to a 15-ml conical tube followed by 10 min of centrifugation (400 g) at 4°C. Supernatants containing NETs were obtained and centrifuged (1,800 g) for 10 min at 4°C to precipitate DNA. Supernatants were discarded, and the remaining pellets were resuspended in precooling PBS. Subsequently, the DNA concentration of every sample was determined by spectrophotometry.

Total liver proteins were extracted by lysing them in a radioimmunoprecipitation assay buffer supplemented with a proteinase inhibitor cocktail. Then, 10–20 µg of the extracted protein samples was run on SDS-PAGE gels (10%) and transferred to polyvinylidene fluoride membranes. The membranes were incubated overnight at 4°C with primary antibodies (Table 2) followed by 1 h at room temperature with horseradish peroxidase-conjugated secondary antibody (Amersham Biosciences, Amersham, UK). A gel imaging system (ChemiScope 2850, Clinx Science, Shanghai, China) detected the signal via a chemiluminescent reaction. ImageJ was used to quantify immunoreactive bands.

The grafts were fixed in 4% paraformaldehyde for 24 h. After embedding, tissues were sectioned (5 µM) and stained with hematoxylin–eosin (HE). The Banff criteria were used for scoring AR. The terminal deoxynucleotidyl transferase dUTP nick end labeling (TUNEL) kit (Beyotime, Shanghai, China) was used to determine the level of hepatic apoptosis according to the manufacturer’s instructions. At different magnifications, a fluorescent microscope was used for imaging.

HE staining revealed a severe, progressive AR response in the liver tissues of rats in the LT group, which was characterized by bile duct damage, serious hepatocyte necrosis, and leucocyte infiltration and peaked on day 7 following transplantation (Figure 1A). On day 7 following liver transplantation, RAI scores were significantly elevated in the liver transplantation group than in the other groups (Figure 1B). The serum parameters for both groups were assessed using a microplate assay. ALT and AST levels were observed to be elevated postoperatively and peaked at day 7. Additionally, TBIL levels were elevated and peaked on the 14th day (Figure 1C–E). Similarly, hepatic apoptosis was significantly increased and peaked within 7 days post-transplantation (Figures 1F, G).

To investigate the presence of neutrophils in the AR of liver transplantation models, we used the specific neutrophil marker Ly6G to identify neutrophils in the liver. The LT group rats had a higher number of neutrophils than the sham group. Additionally, Ly6G mRNA levels were significantly increased in the LT group (Figures 2A, B). To establish a connection between neutrophil infiltration and liver inflammation, qRT-PCR was conducted to determine the expression levels of inflammatory and adhesion cytokines such as TNF-α, CXCL1, IL-1β, CXCL2, and IL-6. In samples from the LT group, there was a significant increase in pro-inflammatory and adhesion cytokines (Figure 2B). Then, we determined whether the infiltrated neutrophils contributed to the NET formation in the liver from the AR of liver transplantation models. Typical NETs were labeled using MPO and H3Cit markers. In comparison to the sham group, typical NET structures were found in the livers of the LT group (Figure 2C).

Table 3 Characteristics of the base line.

Figure 4 Release of NETs from peripheral blood neutrophils in liver transplantation patients. (A) Neutrophil cells were obtained from the peripheral venous blood of healthy controls (HC) and liver transplantation patients. They were incubated at 37°C for 2 h without stimulation. PMA was used as a positive control (magnification, ×200; scale bar = 100 μm). (B) Quantification of neutrophil NETosis. (C) Immunofluorescence assessment of NET formation as determined by colocalization of H3Cit, NE, MPO, PR3, and DAPI (magnification, ×200; scale bar = 100 μm). n = 6 for each group. Data were analyzed using the chi-square test. ****P < 0.0001.

To investigate whether HMGB1 induces NET formation in vitro, neutrophils from 3 healthy individuals were isolated and cultured in DMEM supplemented with varying concentrations (5, 10, 20, and 40 ng/ml) of HMGB. The association between stimulation conditions and NET formation was determined at various time points (30, 60, 90, and 120 min). During the 2-h incubation with HMGB1 (40 ng/ml), the majority of nuclei decondensed, while the netting neutrophils continually formed with increasing time (Figure 5A). There was an elevated NETosis percentage (Figure 5B) and a NET level (Figure 5C) that was dependent on the duration of exposure to HMGB1 as well as the concentration.

Kupffer Cells Are the Main HMGB1 Secretory Cells in the Liver

We investigated whether Kupffer cells or hepatocytes were the main HMGB1-secreting cells during immune-mediated liver injury. Primary Kupffer cells and hepatocytes were obtained from healthy rats and pretreated with LPS at different time durations (1, 6, 12, 18, and 24 h). In vitro, Kupffer cell supernatants contained significantly higher levels of HMGB1 than hepatocyte supernatants (Figure 7A). To illustrate the effect of Kupffer cell depletion on HMGB1 secretion, rats were pretreated with GdCL3 (a macrophage inhibitor). In comparison to the LPS-treated group, we observed that GdCL3 significantly suppressed the serum HMGB1 levels in the LPS+GdCL3 group in vivo (Figure 7B).

Figure 7 Kupffer cells are the major HMGB1-secreting cells. (A) ELISA analysis of supernatant HMGB1 levels in primary rat Kupffer cells and hepatocytes following stimulation by LPS (1 μg/ml). (B) Rats were intraperitoneally administered with LPS (8 mg/kg) in the absence or presence of GdCl3 (20 mg/kg for 24 h before LPS injection) injection. Serum HMGB1 was measured by ELISA, 12 h after the injection. n = 6 for each group. One-way ANOVA was used to determine the statistical differences between groups. ***P < 0.001.

Previously published studies reported that HMGB1 promotes NET formation via its interaction with TLR-4 (29, 30). Therefore, we confirmed that these changes were associated with the HMGB1/TLR-4/MAPK signaling pathway activation in human neutrophils stimulated by HMGB1. Our data showed that HMGB1 activated the HMGB1/TLR-4/MAPK signaling pathway during HMGB1-induced NETosis. Additionally, TAK-242 (a TLR-4 inhibitor) decreased the activation of the HMGB1/TLR-4/MAPK signaling pathway, which was reversed by LPS (a TLR-4 agonist), indicating that inhibiting the HMGB1–TLR-4 interaction and HMGB1 secretion in a TLR-4-dependent manner are required for HMGB1-induced NET formation. Our data showed that blocking TLR-4 with TAK-242 was therapeutic in rats following liver transplantation; however, other potential TLR4 ligands could account for this effect, and more specific mechanisms require further research. Additionally, we found that Kupffer cells are the primary HMGB1-secreting cells in the liver following immunological liver injury. Our major findings are summarized in a concept diagram (Figure 10).

Furthermore, we investigated the association between NET and Kupffer cell activation. With increasing NET concentration, the M1 polarization effect of Kupffer cells was gradually increased, and the TLR-4/MAPK signaling pathway was significantly activated. Additionally, we found that NETs can promote HMGB1 intracellular translocation in Kupffer cells, resulting in HMGB1 release into the extracellular milieu. Massive extracellular HMGB1 accumulation promotes NET formation in neutrophils. Eventually, interactions between neutrophils and Kupffer cells within the context of immune-mediated liver injury form a positive feedback loop that exacerbates liver damage. The underlying mechanism may be associated with the role of NETs in M1 polarization of Kupffer cells, HMGB1 intracellular translocation, and proinflammatory cytokine production via TLR-4/MAPK activation.

Numerous studies have established that activation of the mTOR signaling pathway is essential for Kupffer cell M1 polarization (31, 32). Rapamycin, as a well-known mTOR inhibitor, is one of the main immunosuppressive drugs used to prevent liver transplant rejection (33–35). However, the use of immunosuppressive agents is frequently associated with a plethora of side effects (36, 37). Numerous studies have discovered that treating AR following liver transplantation using a multi-target and multi-pathway approach may be a novel therapeutic strategy. We found that combining TAK-242 and rapamycin could more significantly alleviate AR following liver transplantation more effectively than either treatment alone.

The original contributions presented in the study are included in the article/Supplementary Material. Further inquiries can be directed to the corresponding author.

ZW, YLiu, and XP participated in designing the experiments and editing the final draft of the article. YLuo, XP, XQ, JG, ZH, TM, and BZ participated in performing the studies. All authors contributed to the article and approved the submitted version.

The Supplementary Material for this article can be found online at: https://www.frontiersin.org/articles/10.3389/fimmu.2022.823511/full#supplementary-material