Recognition of the Effect of Indirect Revascularization for Moyamoya Disease: The Balance Between the Stage Progression and Neoangiogenesis 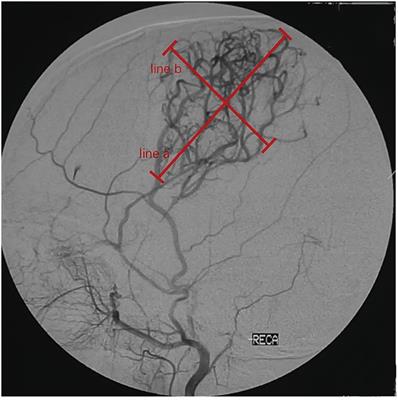 Moyamoya disease (MMD) is a rare, chronic, and progressive cerebrovascular disorder that is characterized by stenosis and occlusion of the distal carotid, proximal middle, and anterior cerebral arteries and is accompanied by the development of small collateral vessel networks (1, 2). Currently, surgical revascularization is considered the standard treatment for MMD that could prevent strokes by augmenting blood flow to the affected cerebral hemispheres. The most used surgical modalities include direct bypass, indirect bypass, and combined bypass. Indirect revascularization, or indirect bypass surgery, is an essential component of surgical treatment for MMD. This procedure improves cerebral perfusion by attaching pedicled, vascularized grafts to the cortical surface and facilitating ingrowth of neoangiogenesis (3, 4).

Indirect encephaloduroarteriosynangiosis (EDAS) has been a widely established treatment strategy for patients with MMD because of its excellent postoperative results, leading to extensive collateral formation and minimal complications (5–9). However, the progression of neoangiogenesis after surgery has not yet been investigated. How long it takes for neovascularization to fully develop and whether the ingrowth continues in the long-term remain unknown. A recent study found that after indirect bypass surgery, neoangiogenesis was very similar at short-term (3–6 months) and long-term (1 year) follow-ups, indicating the most important period for extension of new vessels across the cortical surface was within 6 months of surgery (10). Conversely, another study found the proportion of cases with good neoangiogenesis after EDAS was higher when the patients underwent follow-up for more than 24 months, indicating a general trend of collateral grade improvement upon an increase in follow-up length (9). Therefore, we conducted the current retrospective study comparing neoangiogenesis at short-term (7.4 months) follow-up and long-term (12.5 years) follow-up after indirect bypass surgery, hoping to identify the proceed of the ICA after revascularization surgery.

We enrolled patients who were diagnosed with MMD and treated at the Department of Neurosurgery in the Fifth Medical Center of Chinese PLA General Hospital, Beijing, China from December 2002 through September 2009. The inclusion criteria were as follows: (1) diagnosis of definite or probable MMD via digital subtraction angiography (DSA) (11); (2) patients who underwent EDAS by a single surgeon (Duan Lian) for the treatment of MMD; and (3) patients who received at least two postoperative DSAs after surgical revascularization, a short-term (6–9 months) and a long-term (duration ≥8 years after surgical revascularization up to the latest follow-up angiography). A total of 78 patients were included in this study. Many of the patients included in this study received several postoperative DSAs between the first and the last follow-up angiography. Surgical procedures were described in our previous reports (12, 13). Bilateral surgery is generally required for patients with definitive MMD. In bilateral MMD, we first revascularized the clinically more symptomatic side or more serious hemodynamic impairment. If no lateralizing signs or symptoms were present, we preferred to revascularize the dominant side first. The second side was usually revascularized 3 months after the first surgery, as tolerated by the patient. In patients who underwent bilateral surgery, the duration of follow-up began from the time of the last operation. The study was approved by the Research Ethics Board at the Fifth Medical Center of Chinese PLA General Hospital and all the subjects provided written informed consent to participate in the study. All the procedures performed in this study involving human participants were in accordance with the Declaration of Helsinki (1964). The clinical trial was registered at the ClinicalTrials.gov identifier (NCT number): NCT03627975.

Information on patient sex, age at admission, family history of MMD, initial symptomatic presentation at diagnosis, and radiographic presentations at admission was recorded. Onset type of MMD was defined as hemorrhagic (intracranial hemorrhage, subarachnoid hemorrhage, or intraventricular hemorrhage), ischemic (cerebral infarction or TIA), or atypical (seizure, headache, or asymptomatic) based on the first presenting symptoms.

Digital subtraction angiography (DSA), including injection of both internal carotid arteries and both vertebral arteries, as well as assessment through the late venous phase to evaluate the collateral flow from all possible sources, was required for all recruited patients preoperatively and on follow-up. All angiographic characteristics were evaluated by two experienced neurosurgeons who were blinded to genotypes, including Suzuki stages (2), the involvement of posterior cerebral artery (PCA), collateral circulation, superficial temporal artery (STA) collateral, middle meningeal artery (MMA) collateral, and occipital artery (OA) collateral. Discrepancies in the radiologic findings were discussed before a final decision was made.

Evaluation of Postsurgical Neoangiogenesis and the Stage Progression

To assess the efficacy of neoangiogenesis and guide subsequent treatment management, we requested that each patient undergo follow-up cerebral arteriography after surgery at 6 months, 1 year, and each following year. The development of collateral circulation through EDAS was graded according to the system described by Matsushima et al. (14): grade 3, in which the area supplied by EDAS covered more than two-thirds of the MCA distribution; grade 2, in which one-third to two-thirds of the MCA distribution was covered; grade 1, in which only one-third of the MCA distribution was covered through EDAS; grade 0, no collateral circulation was observed. The patients were divided into a good postoperative collateral circulation group (grade 2 or grade 3) and a poor postoperative collateral circulation group (grade 0 or grade 1). To evaluate postsurgical neoangiogenesis more accurately, the longest horizontal distance (width) and vertical distance (height) of the area covered by neoangiogenesis were measured as in a previous study (10) (Figure 1). Then, the progression of lesions from lower to higher Suzuki stages was divided into two levels: mild progression, progressing from the initial Suzuki stage into the next stage, which we define it as the stable group; severe progression, progressing into the higher Suzuki stage by striding over 2 or more stages, we define it as the progression group. Meanwhile, we evaluated long-term clinical outcomes by evaluating the occurrence of recurrent strokes (cerebral infarction or hemorrhage).

All the clinical characteristic data are presented as mean ± SD for continuous variables and n (%) for categorical variables. The categorical variables were analyzed using the chi-square (χ2) test, the continuous variables were compared using the paired t-test or Wilcoxon signed-rank test, multiple linear regression, and Spearman’s correlation analysis was also conducted. The Kaplan–Meier survival analysis was used to estimate stroke risk. The data were considered statistically significant when the p-value was <0.05. All the statistical analyses were conducted with IBM SPSS statistical software version 22 for Windows (IBM Corp., Armonk, NY, USA).

With the permission of the corresponding authors and their institutions, combined with the relevant documents, all the data used for analysis will be shared after ethics approval if requested by other investigators for reasonable purposes of replicating procedures and results.

A total of 78 patients who received indirect EDAS were enrolled in the study. Their clinical characteristics are summarized in Table 1. The mean ± SD age at the first operation was 26.9 ± 15.0 years (range 2–55 years), and there were 42 female and 36 male patients (women/men ratio was 1.17:1.00). In total, 34 patients were diagnosed with either hypertension, diabetes mellitus (DM), or hyperlipidemia. Among the 78 patients with MMD, 56 (71.8%) exhibited ischemic symptoms, 14 (18.0%) exhibited hemorrhagic symptoms, and eight (10.2%) exhibited atypical symptoms as the initial symptoms.

Comparison of Neoangiogenesis at Short-Term and Long-Term Follow-Up

Table 2. Comparison of neoangiogenesis at short-term and long-term follow-up.

At the long-term follow-up, among the 145 hemispheres that underwent EDAS surgery, 94 (64.8%) hemispheres had good neoangiogenesis after surgery and 51 (35.2%) had poor development. Univariate analysis showed that younger age and existence of spontaneous EC–IC collaterals were significantly related to good neoangiogenesis (p = 0.012 and p = 0.032, respectively), whereas hemorrhagic onset and diagnosed hypertension were related to poor neoangiogenesis (p= 0.009 and p = 0.038, respectively). To further rule out the effects of various factors, a multivariate analysis was conducted with the aforementioned significant factors. Hemorrhagic onset (p = 0.011) was recognized as an independent predictor for neoangiogenesis after EDAS surgery.

By contrast, the progression of Suzuki stages at long-term follow-up is likely attributed to the natural progression of the disease, as MMD is a progressive and occlusive cerebrovascular disease. The relation between the stage progression and postsurgical neoangiogenesis at long-term was different from that at short time after cerebral revascularization. With the natural progression of MMD, neo-formative collaterals originating from the extracranial artery could continuously develop. Two typical cases in this study demonstrated this process well. Interestingly, EDAS in these cases may be regarded as an unhelpful operation as no or little neo-formative collaterals originating from ECA were observed at the beginning. However, neoangiogenesis began to develop and became burly in long-term accompanied by the progression of the ICA. The results indicated that EDAS could play an important preventive role in preventing future ischemia, even if it did not appear to work at short-term follow-ups. Therefore, indirect revascularization should be suggested in young patients with even the slightest ischemia. In the absence of a comparison with direct revascularization in our present study, we could not conclude that indirect revascularization has an advantage in the long-term. A long-term follow-up angiographic study found that an indirect effect of formation of new vessels in the hypoperfused regions of the brain seemed to be prevalent after extracranial-intracranial arterial bypass. The result showed indirect revascularization demonstrated advantageous long-term effects.

This study showed that the 1-, 5-, and 10-year actuarial stroke rates were 2.7 ± 1.3, 7.5 ± 2.4, and 12.3 ± 3.1%, respectively. The result was slightly higher compared with our previous studies (6, 7, 12, 13). The discrepancy was mainly attributed to selection bias. In our study, some patients were admitted to the hospital and received long-term follow-up DSA due to recurrent infarction or hemorrhage. Although long-term follow-up was requested for all patients, a significant portion of patients refused due to their good recovery with no sign of ischemia or bleeding. We found that long-term clinical outcome was not related to the postsurgical Matsushima grade, indicating an inconformity between clinical outcome and radiological outcomes. Among the nine recurrent strokes, four were infarctions, including two occipital lobe infarctions, one frontal lobe infarction, and one contralateral parietal lobe infarction without revascularization surgery. This meant that no infarction was related to insufficient neoangiogenesis induced by indirect revascularization. This may also indicate a more positive effect of repeat bypass surgery for the frontal/occipital area in refractory MMD. Among the recurrent strokes, five were hemorrhages. Furthermore, three of five patients initially presented with ischemia. Furthermore, hemorrhagic onset was recognized as an independent predictor of poor neoangiogenesis after indirect bypass surgery. Whether indirect surgery can effectively prevent rebleeding remains a controversial issue. Further research focusing on reducing rebleeding rate after indirect revascularization might be needed.

This study had a few limitations. First, this study had a small number of patients; nonetheless, our findings can be considered significant because MMD itself is rare, and long-term follow-up is not easy in terms of clinical and angiographic states. Second, a selection bias may exist given the study’s retrospective design. To limit this bias, all the consecutive patients underwent surgery by a single surgeon. Third, perfusion data were not included in this study owing to the use of different diagnostic methods, such as positron emission tomography, single-photon emission computed tomography, and computed tomography perfusion presurgery, postsurgery, and during long-term follow-up in our early cases. Fourth, the only procedure included in this study was EDAS. Other types of indirect surgery, including multiple burr holes, encephaloduromyoarteriosynangiosis (EDMAS), and encephalodurogaleosynangiosis (EDGS), were not investigated. Further research with a larger set of clinical data and including more surgical types might be needed to validate the progression of neovascularization development in MMD.

The datasets presented in this article are not readily available due to ethical and privacy restrictions. Requests to access the datasets should be directed to the corresponding authors.

This study was supported by grant from the National Natural Science Foundation of China (Grant No. 82171280).