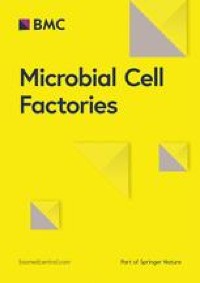 Constructs consisting in the mature form of bovine lingual antimicrobial peptide (LAP; Uniprot entry Q28880, V25-K64) or human defensin 5 (HD5, Uniprot entry Q01523, A63-R94) were fused to green fluorescent protein (GFP) [61] using a linker sequence (SGGGSGGS) and named LAP-GFP and HD5-GFP, respectively. Each construct was C-terminally fused to a 6-histidine tag for purification and quantification purposes. LAP-GFP-H6 and HD5-GFP-H6 were codon-optimized (GeneArt®, Lifetechnologies, Regensburg, Germany) and cloned in pET22b (AmpR) (Novagene, Darmstadt, Germany) vector. pET22b vector has a T7 promoter. The plasmid with each construct (LAP-GFP-H6 HD5-GFP-H6) was transformed into competent E. coli BL21 (DE3) and Origami B (DE3). DE3 indicates that the host is a λDE3 lyogen, which carries a copy of T7 RNA polymerase gene under the control of lacUV promoter, which is induced by the presence of isopropyl-β-d-thiogalactoside (IPTG). The production of T7 RNA polymerase induce the synthesis of the protein encoded in pET22b vector with a T7 promoter.

Escherichia coli BL21/pET22b cultures (0.5 L) with each antimicrobial fusion (LAP-GFP-H6, and HD5-GFP-H6) were grown overnight (O/N) in shake flasks at 37 °C and 250 rpm in LB broth with ampicillin at 100 μg/mL. Escherichia coli Origami B/pET22b with each antimicrobial fusion (LAP-GFP-H6 and HD5-GFP-H6) were grown at the same conditions with ampicillin, kanamycin, and tetracycline at 100, 25, and 12.5 μg/mL, respectively. The O/N were used as inoculum in fresh LB medium, starting at OD600 = 0.05. Recombinant protein expression was induced by 1 mM IPTG when cultures reached an OD600 = 0.4–0.6. Culture samples of 25 mL were withdrawn at 0, 1, 3, and 5 h post-induction, and they were collected by centrifugation at 6000×g for 15 min at 4 °C. Pellets were resuspended in 500 μL PBS with EDTA-free protease inhibitor (Roche) and bacteria were disrupted by sonication (2 cycles of 3 min, 0.5 s on, 0.5 s off at 10% amplitude) (Branson SFX550 Sonifier). Soluble and insoluble fractions were split by centrifugation (15,000×g, 15 min, 4 °C). Quantifications of LAP-GFP-H6 and HD5-GFP-H6 in both BL21 and Origami strains were obtained by western blot using a monoclonal anti-His antibody (His-probe, Santa Cruz), and their purity was evaluated by a Coomassie blue staining assay. Both outcomes were evaluated by ImageJ software to determine protein quantity and purity.

Cultures (1 L) of each fusion construct were grown and induced with IPTG, as described in the previous section. After 3 h of production, the whole culture was harvested (6000×g, 15 min, 4 °C). Pellets from 500 mL culture of LAP-GFP produced in both BL21 and Origami strains and HD5-GFP produced in the BL21 strain were resuspended in 30 mL of binding buffer (500 mM NaCl, 20 mM Tris, 20 mM imidazole) with EDTA-free protease inhibitor (Roche). Bacteria were sonicated (4 cycles, 5 min, 0.5 s on, 0.5 s off at 10% amplitude, Branson SFX550 Sonifier) and centrifugated (15,000×g, 45 min, 4 °C), collecting the supernatant, which contains soluble protein. Culture samples (1 L) of HD5-GFP produced in Origami strain was harvested (6000×g, 15 min, 4 °C) at 3 h post-induction, and the pellet was resuspended in 60 mL of PBS, sonicated as previously described, and centrifugated (15,000×g, 45 min, 4 °C). The supernatant was discarded and the pellet, containing the IBs, was washed with dH2O and centrifugated (15,000×g, 45 min, 4 °C). Then, the supernatant was discarded again, and the pellet was weighted, adding 40 mL of solubilization buffer (0.2% N-lauroylsarcosine mild detergent, 40 mM Tris) per gram of pellet. Next, the pellet was solubilized for 40 h at RT continuously stirred. Solubilized protein was recovered after centrifugation (15,000×g, 45 min, 4 °C), and samples were equilibrated at 500 mM NaCl and 20 mM imidazole for purification.

As described before, at 3 h post-induction, culture was harvested (6000×g, 15 min, 4 °C). The supernatant was discarded and the pellet was stored at − 80 °C (minimum 16 h). Then, cells were thawed at RT, sonicated (2 cycles, 1.5 min, 0.5 s on, 0.5 s off at 10% amplitude, Branson SFX550 Sonifier), and stored at − 80 °C O/N. Next, samples were thawed, and 0.2% (v/v) Triton X-100 (Sigma Aldrich) was added, incubating for 1 h at RT and 250 rpm, sample then was frozen at − 80 °C. An extra frozen/thawed cycle was recommended. Next, a contamination control was performed, 100 μL of sample was platted on LB-agar plate and incubated at 37 °C O/N. Freeze/thaw cycles were repeated until no viable bacteria were observed in control plates. Further, IBs were incubated with 250 μL NP-40 (ThermoScientific™) for 1 h at 4 °C and 250 rpm. Afterward, 0.6 μg/mL DNase I (Roche) and 0.6 μg/mL MgSO4 were added, and the sample was incubated for 1 h at 37 °C and 250 rpm. Then, the IBs were collected by centrifugation (15,000×g, 15 min, 4 °C) and the supernatant was discarded. After, IBs were resuspended in lysis buffer (100 mM NaCl, 50 mM Tris, 1 mM EDTA, 0.5% Triton X-100), followed by a contamination control as previously described. Then, IBs were harvested (15,000×g, 15 min, 4 °C) and frozen − 80 °C after supernatant was removed. Finally, IBs were washed in 10 mL PBS, aliquoted, and centrifuged (15,000×g, 15 min, 4 °C). The supernatant was removed and the pellets, which contained purified IBs, were kept at 80 °C until use. Purity and quantity of purified IBs were assessed by Western Blot and Coomassie assay. Shortly, the samples of soluble and IBs proteins were boiled at 95 °C for 10 and 45 min, respectively, to ensure that the protein is completely denaturalized. Next, samples were resuspended with Laemmli loading buffer (100 mM Tris, 8% glycerol, 55 mM SDS, 4% β-mercaptoethanol, and 1.6% urea) and subsequent analyzed by electrophoresis (SDS-PAGE). Proteins bands were electroblotted into PVDF membranes at 1.3 A and 25 V for 10 min, followed by a blocked step at 4ºC O/N with bovine serum albumin (BSA) at 5% in TBST buffer (10 mM Tris, 150 mM NaCl, 0.05% Tween 20). Next, the membranes were incubated 2 h at RT in primary antibody (Anti-His, Sant Cruz Biotechnology) at 1:1000 dilution, followed by 3 washes in TBST buffer. Finally, membranes were incubated with secondary antibody (anti-mouse IgG-alkaline phosphatase (Sigma) at 1/20,000 dilution for 1 h at RT and three time washed. Proteins bands were revealed after alkaline phosphatase (NBT/BCIP, Thermo Scientific) substrate incubation and protein was quantified with ImageJ software.

Antimicrobial activity was determined with the Bactiter-Glo ™ Microbial Cell Viability kit (Promega). Briefly, an O/N culture of MRSA and P. aeruginosa was diluted 100-fold in 10 mM KPi (10 mM), aliquoted in 150 μL eppendorf, and centrifugated (6200×g, 15 min, 4 °C). Supernatant was removed and the bacteria pellet was resuspended in 150 μL of each treatment (acetic buffer—negative control, soluble proteins (LAP-GFP-H6 and HD5-GFP-H6) at 5 μM and IBs (LAP-GFP-H6 and HD5-GFP-H6) at 5 μM). Samples were incubated in a sterile polypropylene 96-well microtiter plate 5 h at 37 °C. Next, 100 µL of each sample were mixed with the same volume of BacTiter-Glo™ reagent on a sterile 96-well white opaque microtiter plate. Plates were incubated for 5 min and luminescence was measured in a microplate luminometer (LumiStar, Omega). The measured arbitrary luminescence values were normalized against the control (KPi treatment).

To evaluate protein stability, soluble LAP-GFP-H6 and HD5-GFP-H6 were incubated at different timescales (0 h, 5 h, 24 h, 48 h, 72 h and 1 W) at 37 °C and then, antimicrobial activity was evaluated as previously described.

Fluorescence of the GFP fused with the antimicrobial peptides was recorded in a fluorescence spectrophotometer (LumiStar, Omega). LAP-GFP-H6 and HD5-GFP-H6 in both soluble and IBs formats produced in both E. coli BL21 and Origami B strains were analyzed, being the samples diluted when required. They were excited at 480 nm and the emission was recorded at 510 nm. Specific fluorescence was calculated using the amount of protein in each sample.

Sulfhydryls (–SH) not-forming disulfide bonds (–S–S–) were determined according to a previously established protocol based on 4,4′-diothiodipyridine (DTDP) [62]. DTDP is a small, amphiphilic uncharged molecule, capable of quickly reacting with poorly accessible sulfhydryls. In this case, samples were diluted to a final sulfhydryl concentration ≤ 40 μM in 1 mL (calculated by multiplying protein moles by the number of SH) and mixed with 200 μL of sodium buffer (100 mM NaH2PO4, 0.2 mM EDTA, pH 6.8 adjusted with NaOH). After the addition of 50 μL of 4 mM DTDP, samples were vortexed and incubated for 5 min at RT. Next, samples were read at an absorbance of 324 nm (A324) against a water blank. For the reagent blank (A324r), 1 mL of potassium phosphate buffer was mixed with 200 μL of sodium buffer and 50 μL of DTDP reagent. For the protein blank (A324p), 50 μL of water was added instead of DTDP reagent in the sample with a 200 μL sodium buffer. For proteins in insoluble form, the A324 increase was monitored over time after the addition of DTDP to the sample, to achieve an increment of A324 over 5 min.

All experiments were performed in triplicate and represented as the mean of non-transformed data ± non-transformed standard error of the mean (SEM). Data were previously checked for normality (JMP, SAS Institute Inc.) and p-values and letters correspond to the ANOVA analyses and Tukey test analyses respectively, using transforming data when required.

Impact of the COVID-19 pandemic on malaria cases in health facilities in northern Ghana: a retrospective analysis of routine surveillance data – Malaria Journal