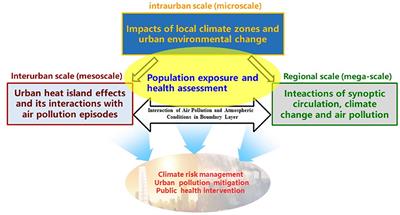 Climate change and air pollution are two major issues posing threats to the population living in large metropolitan areas. In the last years, the increase in frequency of severe weather events due to climate change and air pollution episodes, is of high concern in terms of property damages and life losses. Insight from future projections, urbanization will significantly influence climate change in the coming decades. More importantly, recent studies found significant evidences regarding the mutual interaction between climate change and air pollution, which could magnify the adverse impacts on both environment and society. For example, air pollution extreme events such as haze can be modulated by local weather conditions. Adverse scenarios from climate change can be directly and indirectly influenced by aerosol concentrations as well as optical properties (Figure 1). All of these environmental extremes are not only being the determinants that can damage the earth system but also adversely influencing human health due to an unfavorable condition caused by compact urban environment paired with a high population density. Although half of the global population is living in urban areas, interactions between climate change, aerosol pollution and public health risk in an urban context have yet to be fully explored.

Given the complexity of the issues linking climate change and aerosol pollution in an urban context (Figure 1), this Research Topic aimed to collect a series of study to quantitatively assess and report the links between these environmental issues and public health risk under the following topics:

2) Practical experiences to solve various environmental problems due to climate change and pollution;

A total of four articles belong to this Research Topic. The main topics of these publications include a discussion of interactions between urbanization and climate change, case studies regarding impacts of urbanization on extreme weather events (e.g., heat waves and rainstorms), and the impacts of climatic factors of coronavirus transmission. More in detail, the results show that the impact of urbanization on both surface and air temperature as well as precipitation is not just relevant on a local context, but also contributes at intraurban and regional level, demonstrating the variability of climatic impacts in mega- and meso-scale contexts.

In particular, changes in atmospheric environment, which induced by rapid urbanization, led to uncertainty in operational meteorology regarding how to forecast a time-series data of surface temperature and temperature extremes. To better understand the issues related to operational meteorology, Shi et al. re-defined the atmospheric environment that could be observed by operational weather forecasting as a “meteorological observational environment” (MOE). This study provided a comprehensive review with a summary in details regarding the recent trend of MOE study, based on the following dimensions: (1) characterization of MOE’s spatial morphology, (2) bias of time-series (re)production for air temperature prediction due to the change of MOE caused by urbanization, and (3) future directions.

For the study of temperature extremes, Chen et al. assessed the impacts of extremely high temperature across urban areas based on a novel development of a dataset of urban canopy parameters (UCPs) with high resolution. By using vector-format building information as data input, the UCP dataset was generated, based on estimations from an integrated weather research and forecasting (WRF)/urban modeling system and a Single-Layer Urban Canopy Model with parameterization of building effect. This application significantly improved weather forecasting of urban heat events in Hangzhou, China. This method could also produce an accurate result in micro-scale that could demonstrate the spatial variability of urban heat island effects under the impact of heat waves.

Using Pearl River Delta (PRD) as an example, Zhang et al. analyzed the relationships between synoptic weather patterns, summer precipitation and urban–rural differences. This study demonstrated a notable case regarding how urbanization could influence drizzles, which the decreasing frequency of light rain across urban areas could be more significant than that of rural areas, while the occurrences of heavy rains and storms in urban areas could dramatically be increased.

Last but not least, Zheng et al. selected 265 cities in China as cases and found that high humidity, low wind speed, and moderately cold weather were key determinants influencing the spread of COVID-19. In particular, a causal relationship regarding the 1-day lag effect of daily averages of air temperature on COVID-19 confirmed cases in several Chinese cities was found, which indicated that climatic patterns could be an accelerative lotion on the human threats and public health risks caused by the pandemic.

In conclusion, the emphasis and viewpoints of the published articles as well as the topics covered by this Research Topic can push forward the academic society to (re)think urban challenges in the context of climate change. Linking to the 17 Sustainable Development Goals (SDGs) from the United Nations as well as framework suggested by Intergovernmental Panel on Climate Change (IPCC), the results from these publications should be able to support enhance protocols and strategies for climate risk management, air pollution mitigation, and public health intervention in city- and region-scales in the future.

YY designed the research and drafted the manuscript. HH, SL, and XY contributed to review, editing, and comments. All authors contributed to the article and approved the submitted version.

This study was supported by the National Natural Science Foundation of China (42175098).

Copyright © 2022 Yang, Ho, Lolli and Yang. This is an open-access article distributed under the terms of the Creative Commons Attribution License (CC BY). The use, distribution or reproduction in other forums is permitted, provided the original author(s) and the copyright owner(s) are credited and that the original publication in this journal is cited, in accordance with accepted academic practice. No use, distribution or reproduction is permitted which does not comply with these terms.

May 17, 2022 José Ignacio Martínez-Montoro
Save 80% on select product(s) with promo code 80Y4DBHR on Amazon.com