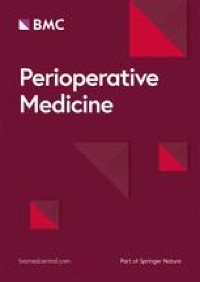 Female patients (age range 18–49 years) with American Society of Anesthesiologists physical status 1 or 2 and scheduled for day surgery under general anesthesia were included in this randomized clinical trial. Patients who were pregnant or breastfeeding, taking other serotonin receptor antagonists, or had Lapp lactase deficiency, galactose intolerance, or glucose-galactose malabsorption prior to the study were excluded.

This was a parallel, block-randomized trial (block sizes of 6 and 8) with an allocation ratio of 1:1. The randomization table was created using a web-based randomization system (http://www.randomization.com). An anesthesiologist not involved in the study was in charge of randomization and prepared opaque, sealed envelopes containing a slip of paper with a computer-generated description of whether the patient would receive ramosetron ODT (ramosetron group) or not (control group).

The investigating anesthesiologist who performed the outcome assessment was not blinded to the groups, since he was required to assess drug compliance as per the trial protocol.

For postoperative pain control, either fentanyl 50 μg (when the verbal numerical rating scale (VNRS) > 5; VNRS 0 = “no pain” and VNRS 100 = “worst pain imaginable”) or ketorolac 30 mg (when the VNRS ≤ 5) was administered intravenously.

After surgery, patients who suffered from nausea or vomiting were administered ramosetron 0.3 mg intravenously at the first episode. For subsequent episodes of nausea or vomiting, a single dose of 10 mg metoclopramide was given intravenously. Nausea was defined as a subjective feeling of being sick, and vomiting was defined as an expulsion of gastric contents or retching. This protocol was applied in both the patient groups.

In the control group, patients were administered only metoclopramide 10 mg for the treatment of nausea and/or vomiting at a maximum dose of 30 mg per day.

The primary outcome was the incidence of nausea during the 24 h after discharge. The secondary outcomes included the incidence of nausea and vomiting (30 min and 3 h postoperatively, and 48 h after discharge), severity of nausea, and the rate of rescue antiemetic (metoclopramide) administration. Additionally, we investigated the pain scores and the dosage of analgesic used. The severity of nausea (0 = “no nausea” and 100 = “worst nausea imaginable”) and pain (0 = “no pain” and 100 = “worst pain imaginable”) was measured using the VNRS. The investigators interviewed the patients 24 and 48 h post-anesthesia by telephone.

By assuming that the incidence of post-discharge nausea was 30% (the overall incidence in patients who have two risk factors for PDNV) in the control group and 10% in the ramosetron group (about 70% reduction in the incidence of nausea from the control group), and that this difference was clinically significant, we calculated that 138 patients were needed to be recruited to achieve 80% power to detect this difference at a two-sided alpha level of 0.05, considering a 10% drop out rate.

After normality check of variables using the Shapiro-Wilk test, continuous variables were compared with Student’s t test or Mann-Whitney U test and expressed as the mean (standard deviation (SD)) or median (interquartile range (IQR)), as appropriate. For categorical data, a chi-square test or Fisher’s exact test was used, and the results were described as a number (proportion). All analyses were carried out using IBM® SPSS® Statistics version 25.0 (IBM Corporation, NY, USA). P < 0.05 was considered as statistically significant.