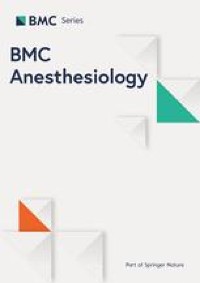 This randomized prospective study was approved by the Istanbul Medipol University Ethics and Research Committee (29.08.2019, Decision No. 26). After approval, the trial was recorded at ClinicalTrials.gov (NCT04083287) (10/09/2019). The study procedure was explained to the patients. After verbal explanation, written informed consent was obtained from the participants. The Consolidated Standards of Reporting Trials (CONSORT) flow diagram was used to report present study (Fig. 1). The study was conducted at Medipol Mega Hospital Complex from April 2020 to May 2021. All methods were carried out in accordance with relevant guidelines and regulations.

A total of 60 patients were included in the study. They were aged 18–65 years, were classified as American Society of Anesthesiologists (ASA) I or II, and were scheduled for elective unilateral shoulder arthroscopy. All the patients who were included in the study were informed about the ESPB and ISB procedures during their preoperative anesthesia visit. Their demographic data, such as their age, height, weight, gender, comorbidity, and ASA score, were recorded preoperatively.

Patients who had one or more of the following conditions were excluded from the study: previous coagulation or bleeding disorder, receiving anticoagulant therapy, allergy/sensitivity to local anesthetics (LAs) and/or opioids, infection in the procedure area (ESPB and ISB sides, corresponding to the T2 level and the neck, respectively), pregnancy or suspected pregnancy, breastfeeding mother, and refusal to undergo the procedure.

Sixty patients were randomized by a computer-generated algorithm from a computerized randomization program. The study assignment was sealed in opaque envelopes by pain nurse anesthetist. The envelopes were numbered between the numbers 1 and 60. Before arrival to the preoperative regional room, the anesthesiologist responsible for administering the block from the researcher anesthesia team opened the envelope. The group allocation was either a single-shot ISB (n = 30) or ESPB (n = 30). Only the pain nurse anesthetist who also evaluated the postoperative outcomes was blinded to the study.

The ESPB and ISB procedures were performed in the preoperative regional room, followed by electrocardiography, peripheral oxygen saturation (SpO2), and non-invasive blood pressure monitoring. A 20 gauge intravenous (IV) cannula was placed in each patient, and 4 mL/kg 0.9% NaCl infusion was started in the room. The patients were sedated with 2 mg IV midazolam before the procedures. Then LA infiltration was applied to the block procedure area with 2% lidocaine. All the blocks were performed via US (Vivid Q) 30 min before the induction of general anesthesia. A high-frequency linear US probe (11–12 MHz, Vivid Q, Ge Healthcare, USA) was covered with a sterile sheath under aseptic conditions, and a 50 mm block needle (Braun 360°) was used.

ESPB was performed by the researcher anesthesia team in the sitting position before induction, under aseptic conditions, using a high-frequency linear US probe. The US probe was placed longitudinally 2–3 cm lateral to the T2 spinous process [7,8,9, 12] (Fig. 2). The erector spinae muscle was seen here. Using the “in plane” technique, the block needle was inserted into the skin in the caudo-cranial direction. When the trapezius, rhomboid, and erector spinae muscles were passed and the needle touched the transverse process (approximately 3 cm in depth), 5 mL saline was injected into the area between the erector spinae muscle fascia and the vertebral transverse process. Thus, the block site was confirmed. After confirmation, 30 mL of 0.25% bupivacaine was administered.

ISB was applied while the patient was in the supine position. The probe was placed transversely at the level of the cricoid cartilage, and when the artery was identified, the probe was moved slightly laterally. After the visualization of the brachial plexus between the scalene muscles, the block needle was advanced from the lateral to the medial direction with the “in plane” technique, and the block location was confirmed by applying 5 mL saline injection. After the block location was confirmed, 30 mL of 0.25% bupivacaine was administered.

After the success of the blocks was tested using a cold test with an ice pack, the patients were taken to the operating room. The ESPB and ISB were considered successful due to the presence of anesthesia in the corresponding dermatomal area (C5-T1).

Intubation was performed in both groups by administering 2–2.5 mg/kg propofol (Lipuro, Braun), 1–1.5 μg/kg fentanyl (Talinat, VEM), and 0.6 mg/kg rocuronium (Esmeron, Alessandroorsini) intravenously to the patients in both groups. Anesthesia was maintained with sevoflurane (Sevorane, Abbott) in a mixture of O2/air in a 50/50% concentration and remifentanil (Ultiva, VLD) infusion (0.01–0.1 μg/kg/min). The mechanical-ventilator settings were adjusted to provide a 6–8 mL/kg tidal volume and a 30–35 mmHg end-tidal CO2 level. If the pulse or mean arterial blood pressure increased by 20% from the preoperative baseline value, 25 μg bolus fentanyl and 0.1 mg/kg rocuronium were administered intravenously. Arthroscopic shoulder surgery was performed by the same surgical team using the same technique, in the beach chair position. To prevent nausea and vomiting, 4 mg ondansetron was administered intravenously. After extubation, the patients with sufficient spontaneous respiration were taken to the recovery room.

In the postoperative period, the patients were evaluated by another pain nurse who did not know the composition of the groups. The postoperative pain was assessed using the visual analogue scale (VAS) score (0 = no pain; 10 = the most severe pain felt). The VAS scores were recorded at rest (static) and at mobilization (dynamic) at the 1st, 2nd, 4th, 8th, 16th, 24th, and 48th h. If the VAS score was ≥ 4, 0.5 mg/kg IV meperidine was used as rescue analgesia. Perioperative and postoperative opioid consumption, adverse effects (e.g., nausea, vomiting, itching, complications) that may occur due to blocks such as respiratory failure, and hematoma were recorded.

The primary outcome was the result of the comparison of the perioperative and postoperative opioid consumptions. The secondary outcomes were the evaluation of the postoperative pain scores, the complications related to blocks, and the opioid-related side effects.

The mean sample size was calculated using the G*Power 3 analysis program (Heinrich-Heine-Universitat Düsseldorf, Germany). A preliminary study was performed with 16 patients (ESPB group = 8; ISB group = 8). The power analysis was based on the mean fentanyl consumption, which was the primary outcome of the study. The mean fentanyl consumption was 62.85 μg (± 39.03) in the ISB group and 91.4 μg (± 41.4) in the ESPB group. We considered 50% reduction in fentanyl consumption clinically meaningful and important. The sample size was calculated at 80% power and at a 5% significance level, and it was determined that at least 28 patients per group were required to obtain a statistically significant value. Therefore, we included 30 patients in each group to prevent possible dropouts.

Statistical analyses were performed using IBM SPSS Statistics for Windows (Version 22.0; IBM Corp., Armonk, NY, USA). The Kolmogorov–Smirnov test was used to analyze the data distribution, and the Pearson chi square test was used to compare the categorical data (gender, ASA status, rescue analgesic usage, incidence of adverse effect) between groups. Student’s t-test was used to control for differences between the groups at the 5% significance level for the normally distributed continuous variables (demographic datas and duration times of surgery and anesthesia, postoperative fentanyl consumption, introperative remifentanyl consumption and of rescue analgesia consumption, VAS scores). The descriptive statistics were expressed as mean ± standard deviation. In our study, the statistical significance threshold was p < 0.05.