The distribution and function of GDE2, a regulator of spinal motor neuron survival, are disrupted in Amyotrophic Lateral Sclerosis – Acta Neuropathologica Communications 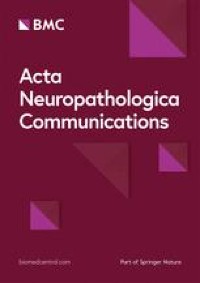 Human motor cortex sections were deparaffinized in Xylenes, then rehydrated in 100% ethanol, 95% ethanol, 70% ethanol, and rinsed with water [30]. Permeabilization was performed with 0.3% PBST followed by antigen retrieval in 10 mM Sodium Citrate with 0.5% Tween-20 (pH 6.0) in a 95 °C water bath. Sections were then washed in PBS followed by overnight blocking at 4 °C in 5% Bovine Serum Albumin (BSA). GDE2 primary antibody (cSS1[30], Covance,1:500) was diluted in 1% BSA and incubated overnight at 4 °C. After blocking endogenous peroxidases with 0.3% hydrogen peroxide and washing with PBS, tissue sections were incubated with horseradish peroxidase (HRP)-conjugated donkey anti-chicken secondary antibody (Jackson ImmunoResearch, 1:500) diluted in 1% BSA for 1 h at room temperature (RT). Sections were washed with PBS, and 3,3′-Diaminobenzidine solution (Sigma-Aldrich, D4168-50) was applied to sections for visualization. Sections were then washed and mounted with ProLong Antifade Gold with DAPI (ThermoFisher, P36931).

The soma and vacuole sizes were calculated from brightfield H&E images. Custom Matlab imaging software was used to threshold and binarize the images to quantify the vacuolization and motor neuron number. A minimum of 12 ventral horns from lumbar spinal cord were analyzed per animal. Neuronal soma were distinguished from glia based on their location in the ventral grey matter and minimum size of 60 μm2. We analyzed a minimum of 900 neurons per genetic condition. To isolate large diameter vacuoles indicative of degeneration, vacuoles required a minimum size of 75 μm2 to be included in the dataset. Vacuole counts were binned in 3.75 μm2 intervals to create a frequency histogram. The number of vacuoles in each bin plus all smaller bins was calculated as a percentage of all detected vacuoles and graphed as a cumulative probability distribution. The distributions of neuronal sizes were compared with an independent samples Kruskal–Wallis Test, and vacuole size distributions were compared with the Kolmogorov–Smirnov test. Manual counts of the mean number of cytoskeletal inclusions were compared with a 2-tailed Student’s t test. Alpha level is 0.05. Error bars represent standard error of the mean unless otherwise indicated.

Cells with accumulations of GDE2 were manually quantified from paraffin sections of control (n = 7) and ALS patient (n = 10) motor cortices. All quantification of human samples was performed blinded. For each sample, 10–12 regions of interest (0.23 or 0.39 mm2) per section were chosen at random to be imaged and analyzed. Accumulations were scored as high intensity if they took up at least 25% of the cell body and were above a relative intensity threshold set to control using ImageJ (NIH). Manual counts of the mean number of high-intensity GDE2 accumulations per mm2 were analyzed using a 2-tailed Student’s t test. For this analysis, the alpha level is 0.05, and error bars represent standard error of the mean.

Samples were subject to reducing SDS-PAGE using 7.5 or 10% Criterion TGX Precast Gels (Bio-Rad Laboratories) in tris/glycine buffer, transferred onto polyvinylidene difluoride membranes at 100 V for 70 min, and blocked with 5% milk in tris-buffered saline containing 0.3% Tween-20 (TBST) for 2–3 h at RT. Membranes were then incubated with primary antibodies diluted in 5% milk in TBST overnight at 4 °C. HRP-conjugated secondary antibodies were diluted in 5% milk in TBST and incubated for 1 h at RT. Membranes were developed using the KwikQuant Imager (Kindle Biosciences) after incubation with enhanced chemiluminescence substrate (Kindle Biosciences, R1004). Imaged blots were analyzed using ImageJ software (NIH).

For tandem mass tag (TMT)-based quantitative MS, the digested peptides from CSF samples were labeled with 11-plex TMT reagents following the manufacturer’s instructions (Thermo Fisher Scientific). The MP sample was labeled with 131C, and CSFs from ALS and control individuals were labeled with the rest of the TMT tags. The labeling reaction was performed for 1 h at RT after mixing each peptide sample in 100 mM TEAB with TMT reagent in acetonitrile (ACN, HPLC grade), and then quenched by adding 1/10 volume of 1 M Tris–HCl (pH 8.0). The TMT labeled peptides were pooled, resuspended with 10 mM TEAB, and then subjected to basic pH reversed-phase liquid chromatography (bRPLC) fractionation to generate fractions on an Agilent 1260 offline HPLC system (Agilent Technologies, Santa Clara, CA, USA), which includes a binary pump, variable wavelength detector, an autosampler, and an automatic fraction collector. The pooled samples were reconstituted in solvent A (10 mM TEAB, pH 8.5) and loaded onto Agilent 300 Extend-C18 column (5 µm, 4.6 mm × 250 mm, Agilent Technologies). Peptides were resolved using a gradient of solvent B (10 mM TEAB in 90% ACN, pH 8.5) at a flow rate of 0.3 mL/min over 90 min, collecting 96 fractions. Subsequently, the fractions were concatenated into 24 fractions followed by vacuum drying using a SpeedVac (Thermo Fisher Scientific, San Jose, CA, USA). The dried peptides were suspended in 0.5% formic acid (FA), and 30% of each fraction was injected for MS analysis.

The acquired tandem MS data were searched against the human UniProt database (released in May 2018, containing protein entries with common contaminants) using the SEQUEST search algorithm through the Thermo Proteome Discoverer platform (version 2.2.0.388, Thermo Fisher Scientific) for quantitation and identification. During MS/MS preprocessing, the top 10 peaks in each window of 100 m/z were selected for database searches. The search parameters included two maximum missed-cleavage sites by trypsin as a proteolytic enzyme. Carbamidomethyl (+ 57.02146 Da) at cysteine and TMT reagents (+ 229.162932 Da) modification at N-terminus of peptide and lysine residues were set as fixed modifications while oxidation (+ 15.99492 Da) of methionine was a variable modification. For MS data, MS1 error tolerance was set to 10 ppm and the MS/MS error tolerance to 0.02 Da. The minimum peptide length was set to 6 amino acids, and proteins identified by one peptide were filtered out. Both peptides and proteins were filtered at a 1% false discovery rate (FDR). The protein quantification was performed with the following parameters and methods. The most confident centroid option was used for the integration mode while the reporter ion tolerance was set to 20 ppm. MS order was set to MS2. The activation type was set to HCD. The quantification value correction was disabled. Both unique and razor peptides were used for peptide quantification. Protein groups were considered for peptide uniqueness. Missing intensity values were replaced with the minimum value. Reporter ion abundance was computed based on the signal-to-noise ratio. Quantification value corrections for isobaric tags were disabled. The co-isolation threshold was set to 50%. The average reporter signal-to-noise threshold was set to 50. Data normalization was disabled. Protein grouping was performed by applying strict parsimony principle as following; 1) all proteins that share the same set or subset of identified peptides were grouped, 2) protein groups that have no unique peptides among the considered peptides were filtered out, 3) Proteome Discoverer iterated through all spectra and selected which peptide-spectrum match (PSM) to use in ambiguous cases to make a protein group with the highest number of unambiguous and unique peptides, and 4) final protein groups were generated. The Proteome Discoverer summed all the reporter ion abundances of PSMs for the corresponding proteins in a TMT run.

Statistical analyses of the results from discovery proteomics

Statistical analysis was conducted with the Perseus software package (version 1.6.0.7). Protein abundance values across the samples were divided by those of MP included in each batch, followed by dividing values of each sample by their median value. After log2-transformation of all the values, values across proteins were z-score-transformed. The fold changes between the comparison groups were calculated by dividing the average abundance values across the samples of one group by the ones of another group. The P values between the comparison groups were calculated with the 2-tailed Student’s t test. The q-values for the volcano plots were calculated by significance analysis of microarrays (SAM) and a permutation-based FDR estimation [31].