Case Report: A Chinese Family of Type A Insulin Resistance Syndrome With Diabetes Mellitus, With a Novel Heterozygous Missense Mutation of the Insulin Receptor Gene 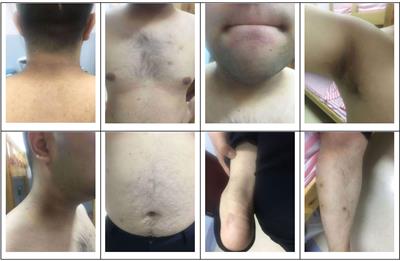 TAIRS is an autosomal dominant or recessive genetic disorder caused by islet dysfunction due to mutations in the INSR, which mainly manifests as severe insulin resistance, hyperandrogenaemia, and acanthosis nigricans, mostly occurring in younger patients. Some patients enter regular states of hypoglycemia requiring differentiation from insulinoma. In this paper we describe, in detail, one Chinese case with the point mutation of gene c.3472C>T (p. Arg1158Trp). Here, we also describe a therapeutic approach that was employed for a patient with type 2 diabetes who had heterozygous missense mutations in the INSR. According to the diagnosis and treatment of TAIRS and the pathogenesis of INSR gene mutation, the clinician can pay attention to insulin resistance, timely diagnosis and treatment, and improve the prognosis.

The subject of this case report is a 22 year old male patient who was admitted to the hospital due to repeated palpitation, sweating, hunger for 10 years, and weight gain for 2 months. The patient had a history of acanthosis nigricans. His grandfather was a diabetic and his uncle was a patient with adrenal cortical adenoma. The body size was obese. Physical examination showed obvious pigmentation in the skin around the neck, underarm pit, and inguinal areas and rough hyperplasia with increasing hair in the chest and abdomen (Figure 1) and other data were normal. Laboratory tests showed that the diabetic autoantibodies: anti-insulin antibody (IAA), anti-islet cell antibody (ICA), and anti-glutamate decarboxylase antibody (GAD) were all negative; insulin growth factor-1 (IGF-1), insulin growth factor-binding protein-3 (IGFBP3) and growth hormone (GH) were all normal. Glycosylated hemoglobin (HbA1c) was 5.60% (reference range: < 6.4%). Adrenal hormone, thyroid hormone, and gonad hormone were all normal. The oral glucose tolerance test (OGTT) and insulin and C-peptide release tests showed that the patient’s level of insulin and C-peptide secretion were high (Table 1). According to the above examination results, the initial diagnosis was hypoglycemia. However, whether the cause was insulinoma, insulin autoimmune syndrome, or insulin resistance needed further examination. Pancreatic MRI indicated a 6 mm diameter nodule-like protrusiona in pancreatic neck. (Figure 2A) and endoscopic ultrasonography (EUS) indicated a low echo area in the pancreatic neck (Figure 2B). According to Figures 2A, B, insulinoma seems to be the cause of the diagnosis. To further clarify the diagnosis, endoscopic ultrasonography-fine needle aspiration (EUS-FNA) and anaqueous alcohol ablation was performed in the gastroenterology department of our hospital. According to the postoperative disease examination (Figure 2C) and the review of OGTT and islet function (Table 2), insulinoma was ruled out as a diagnosis. To further clarify the cause, further genetic testing was needed. The patient and parents signed informed consent. The hospital ethics committee approved the study.

Figure 1 Clinical characteristics of the patient: obvious pigmentation in the skin around the neck, underarm pit and inguinal areas and rough hyperplasia with increasing hair in the chest and abdomen.

Table 1 Results of the parental OGTT for patient and parents.

Table 2 Results of the OGTT review after performing EUS-FNA and after oral metformin.

Clinical whole exon gene sequencing (WES): 3 ml of whole blood was drawn from the patient and selected family members and was sent to the Clinical Laboratory Center of Shenzhen Huada for processing. Blood samples from other family members were not available because they were not local. The detailed steps were as follows:(1) a Covari-LE220 ultrasonic instrument (Massachusetts Company. USA) DNA was interrupted and library preparation was tested by Agilent2100 and BMG; (2) we captured DNA from the clinical whole exome; (3) using the high-throughput BGISEQ-500 platform, gene fragments of the identified mutated regions were subjected to upstream and downstream primer design and PCR amplification. The products were subjected to mass spectrometry or Sanger sequencing, and the results were aligned to the INSR gene standard series to validate the gene microarray results of capture and high-throughput sequencing. Finally, INSR was detected in the peripheral blood DNA of the patient and the father: c.3472C>T(p. Arg1158Trp) Variability (Figure 3). According to patient’s symptoms, signs, OGTT,islet function, and genetic test results, TAIRS was considered as the cause of the diagnosis, the proband’s parents’ OGTT, and islet function examination (Table 1) found that his father also had insulin resistance. After giving oral metformin (500mg, three times in a day, oral before meal) for two years, islet function (Table 2) suggested that the insulin levels, the incidence of nocturnal hypoglycemia, and preprandial hypoglycemia decreased significantly without additional meals.

TAIRS has no specific drugs for treatment. In general metformin is given orally to improve insulin resistance while preventing long-term complications of diabetes and reducing the effects of hyperandrogenemia (13). TAIRS has a relatively good prognosis and Taylor et al. (6) reported that the prognosis is associated with the location or number of mutations in the INSR gene loci. Therefore, gene diagnosis is crucial and the gene diagnosis and gene mutation sites should be actively defined; the insulin receptor gene mutation site is located at codon 1158 of the subunit. The type of mutation is a missense mutation. Two similar cases were reported in this site (8, 9), which is the first in China, proving that this site mutation causes reduced tyrosine kinase activity and decreased ability to bind insulin to insulin receptors, resulting in possible insulin resistance syndrome (14, 15). Takasawa K et al. (9) reported six patients with TAIRS and four had mutations in the INSR gene and two others without mutations, further suggesting that all patients with insulin resistance did not have INSR gene mutations. Huang Zhimin et al. (16) followed one patient for 7 years, which showed a downward trend in the overall insulin secretion levels over time. However, it was not accompanied by the simultaneous deterioration of blood glucose. Hatteraley et al. (17) showed that islet cell function will eventually fail over time and patients with TAIRS will face chronic complications of diabetes. At present, the use of oral metformin (500mg, three times in a day, oral before meal) for two years, significantly reduced the number of hypoglycemia episodes. However, the later progress of islet function still requires further follow-up of the patient’s condition to guide future clinical work.

TAIRS is rare and clinically insidious with a relatively good prognosis. The diagnosis is mainly determined by symptoms, signs, islet function, and INSR genetic testing. Meanwhile, other diseases, such as hyperinsulinemia, insulinoma, and insulin autoimmune syndrome, should be actively excluded to avoid misdiagnosis or missed diagnosis. In treatment, oral metformin is the main treatment, which is also crucial to monitoring islet function and later outpatient follow-up. In clinical practice, the understanding of TAIRS should be strengthened to achieve early detection, early diagnosis, early treatment to improve patient prognosis, and increase the possibility of survival. These findings suggest that metformin is a useful therapeutic option for treating type A insulin resistance syndrome.

The datasets for this article are not publicly available due to concerns regarding participant/patient anonymity. Requests to access the datasets should be directed to the corresponding author.

The studies involving human participants were reviewed and approved by Medical Ethics Committee of Yichang First People’s Hospital. The patients/participants provided their written informed consent to participate in this study. Written informed consent was obtained from the individual(s) for the publication of any potentially identifiable images or data included in this article.

All the authors have contributed significantly. JiY designed the study. WY and LW wrote the manuscript. WY, LW, YL, WenW, LZ, WeiW, JuY, and FC collected and analyzed the clinical data, participated in discussion. JiY supervised the study and corrected the manuscript. All authors contributed to the article and approved the submitted version.