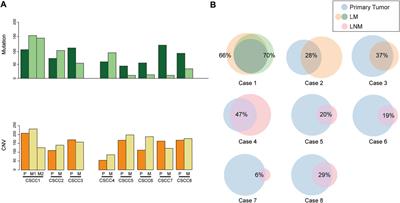 One problem that exists in our routine work is that it is hard to distinguish between metastatic CSCC and primary lesion. If a solitary lung squamous cell carcinoma is found in a patient with CSCC history, the lesion could be either metastasis CSCC or a PPSCC. The differential diagnosis has a big difference in treatment and prognosis. Lung metastasis (LM) is formed through hematogenous metastasis of CSCC and originates from primary CSCC clones. At the same time, PPSCC is generally believed to originate from independent clones from primary CSCC. The treatment is also different for the two diseases; further chemotherapy is needed for LM, while PPSCC cases require surgery. Thus, distinguishing PPSCC from LM is important since the diagnosis can affect subsequent treatment strategies and survival evaluations. In clinical practice, we compare the morphology similarity of lung tumor and CSCC; if they are similar, we tend to believe they are metastatic lesions, and vice versa. However, the morphology is unreliable because the CSCC and PPSCC could be pretty similar. And the p16 positive expression can’t help differential diagnosis because the p16 staining could also be strongly positive in PPSCC cases [5–7]. HPV genotyping [7, 8] could only discriminate about half of these controversial cases because PPSCC could also have HPV infection status. Thus, in this study, we tried to apply WES and analyze if they are clonally related to help distinguish LM and PPSCC.

Metastatic cervical carcinoma is hard to cure using traditional treatment, so new therapeutic approaches are needed. Previous studies demonstrated the function of PTEN, PIK3CA, TP53, and KRAS in the pathogenesis of CSCC [9–12]. The genomic landscape was well established in 2017 by The Cancer Genome Atlas (TCGA) Research Network, which increased our understanding of CSCC [13]. They observed some novel mutations in CSCC, like SHKBP1, CASP8, HLA-A, and TGFBR2. Despite this advancement, a comprehensive molecular landscape depicting the genome alterations during the tumor progression from primary CSCC to metastatic diseases remains elusive. The molecular pathogenesis of metastatic CSCC and how primary CSCC progresses to metastatic CSCC remain largely unclear as genome-wide molecular genetic analysis of metastatic CSCC has not been reported. Revealing this could help us acquire a deep understanding of the genomic process of metastasis and may help us develop new targets on preventing metastasis and improving survival. This study performed WES in surgical specimens of eight pairs of primary and metastatic CSCC. And we analyzed somatic mutations including cancer driver mutations and CNV between primary and metastatic CSCC.

All eight cases were selected from Cancer Hospital, Chinese Academy of Medical Sciences after approval by the Institutional Review Board. The sequence cohort was selected based on the availability of paired tumor primary and metastatic tissues and matched normal tissue controls. All cases received the total hysterectomy surgery. Two experienced pathologists confirmed the diagnosis (L. L. and Y. S.). CSCC1-CSCC3 had paired primary CSCCs and LM specimens, and CSCC4-CSCC8 had paired primary pelvic LNM samples. CSCC1 had two LM specimens, which were LM1 and LM2. The interval from LM1 to LM2 was 12 months for case 1. Finally, 25 FFPE samples, including the paired normal control samples from eight patients with CSCCs (CSCC1- CSCC8), were submitted to WES.

According to the manufacturer’s instructions, WES was performed on the genomic DNA obtained from tumor tissues and matched normal tissue using the Agilent Sure Select Human All Exome V5 Kit (Agilent Technologies, Santa Clara, CA, United States). Paired-end sequencing, resulting in 150 bases from each end of the fragments, was performed using the HiSeq X Ten. The paired-end sequencing raw data (FASTQ format) were aligned to the human reference genome (hg19) using Burrows-Wheeler aligner software (BWA, v0.7.15). The Genome Analysis Toolkit (GATK, v3.6), Picard (http://picard.sourceforge.net; v2.7.1), and Samtools (v1.3.1) were used for the basic processing and management of marking duplicates, including local realignments and score recalibration. Somatic mutations were detected by comparing tumor and matched normal sequencing data using MuTect1 and Strelka for single-nucleotide variants and InDels. Somatic mutations in the test samples were defined according to the following criteria: 1) the mutation was identified in four or more distinct reads and the mutation depth was greater than 15 reads, 2) the mutation was not present in any of the reads in the matched control sample or the other control samples analyzed in this study, and 3) the mutation was uncommon in dbSNPs (frequency < 1%). Only non-synonymous were reported. Putative driver mutations were determined based on previously listed cancer driver genes [14]. All candidate somatic mutations were validated by visual inspection using the Integrated Genome Viewer (IGV) [15].

Moreover, ANNOVAR was used for the functional annotation of each variant in the coding regions. PolyPhen-2 was utilized to predict the impact of an amino acid substitution on protein function and structure.

Binned copy number and segmentation data of the tumor genome, compared to the matched normal tissue, were computed using the copy number calling pipeline of alignment data in the CNVkit package [16]. The visualization of log-ratio segments was done using matplotlib plotting library.

We used the “discrete‐characters Wagner parsimony” method in phylogeny inference package (phylip) version 3.698 [17] to generate phylogenetic trees. All phylogenetic trees were rooted using the control tissue DNA, which represents the ancestral state. Cladograms were plotted with the number of mutations per branch at each end. The trees were drawn using the DrawTree tool under the phylip package.

Patients were involved in the design and conduct of our research.

Statistical analysis was done with Statistical Package for the Social Sciences (SPSS 22.0). In all experiments, comparisons between two groups were based on the Wilcoxon test. Mann-Whitney U was utilized to test for differences among groups. p-values of <0.05 were considered statistically significant.

The Comparison Between Primary and Metastatic CSCC Carcinoma

The mutation number of eight CSCC pairs is shown in Figure 1A. Interestingly, the LNM harbored fewer mutations than primary CSCC specimens, although the difference was insignificant (p = 0.08, Wilcoxon test). The LM specimens also had more mutations than the LNM specimens without significant difference (p = 0.07, Wilcoxon test). In the Venn diagram for the eight cases (Figure 1B), the paired primary lesions and LM shared 28%–70% of mutated genes, while the paired primary lesions and LNM shared 6–47% of mutated genes.

The chromosomal CNVs are a common phenomenon in CSCC [18, 19]. Genome-wide CNA profiling for eight pairs of primary CSCC and matched metastasis genomes are shown in Figure 2 and Supplementary Table S4. The number of CNVs is listed in Supplementary Table S5. CNVs were found to widely exist in primary and metastatic lesions. There was no statistical difference between the CNV number in LM and primary lesions (p = 0.593, Wilcoxon test). Similarly, there was no statistical difference in CNV between LNM lesions and primary lesions either (p = 0.225, Wilcoxon test). LM1 and LM2 in case 1 had distinct CNV numbers.

Further analysis showed amplification of 9p CD274 and PDCD1LG2 (Programmed Cell Death 1 Ligand 2) were detected in the primary lesions of CSCC5 and CSCC7, and LNM lesion in CSCC6.

FIGURE 4. Phylogenetic trees were reconstructed for all cases. Branch length was relative to the number of non-synonymous somatic mutations (not only driver mutations); longer branches indicate more mutations. Branches are labeled with cancer-driver genes. The relative ordering of mutations is for visualization purposes only, as it is impossible to determine which came first. Each leaf corresponds to a single type of tissue harvested from the given patient. CSCC: cervical squamous cell carcinoma; P: primary lesions; LM: lung metastatic lesions; LNM: lymph nodes metastatic lesions.

This study provides the first comprehensive analysis of the molecular genetic alterations in primary CSCC, LM, and LNM. Despite TCGA publishing the genetic landscape of cervical carcinoma, no genetic study on the metastatic CSCC has been published until now. With the deep sequencing of CSCC, we first established the tumor mutation burden and CNV difference on primary and metastatic CSCC.

The LM is originated from CSCC, which means they shared the original clone. The clones have some mutations, including driver mutations and passenger mutations, so the LM and CSCC shared some mutations. If we could find out the original mutations, or the mutations they shared, we could prove they are clonally related or have the same origin. First, we tried to develop a gene panel to include the common 100 genes of cervical carcinoma from NCBI and hope it could cover the >95% of cervical carcinoma cases, LM and LNM. Then we applied the panel to our data, but it could only distinguish six cases, so we expanded the panel to 500 genes, still failing to distinguish all the metastasis lesions. The first reason is that cervical carcinoma is a virus-driven cancer and the tumor mutations burden is low [20], which means their mutation quantity is low, therefore their shared mutations are pretty limited. The second reason is CSCC does not have specific mutations; the gene mutations are randomly distributed in different cases, therefore a panel could not cover all the cases. Thus, we concluded that WES but not an NGS (next-generation sequencing) gene panel is needed for distinguishing LM and PPSCC.

Unlike LNM, LM harbored a similar number of driver mutations with primary lesions, so they may require sufficient driver mutations to expand clones. And the diagnosis for LM and primary CSCC has a time difference of 37 months on average, which means LM have a longer time to accumulate mutations than the primary lesions, but they harbored similar somatic and driver mutation number with primary CSCC so that the clone development may grow slower than the primary lesion because of the different microenvironment. But we do not rule out the possibility that the result is caused by the technical limitations and the involvement of DNA methylation.

In a large study in 2017 [13], over 70% of cervical cancers exhibited genomic alterations in either one or both of PI3K–MAPK and TGFβ signaling pathways [13]. Like that result, mutations in PI3K–MAPK pathway and TGFβ signaling were detected in a significant percentage of patients in this study while the distribution of these mutations is not specific and could be found in both primary and metastatic lesions. But because of the pathway’s importance, it still needs in-depth research to clarify the role of PI3K–MAPK and TGFβ pathway in the process of oncogenesis in a more significant number of tumors.

One limitation of this study is the limited case number; a detailed sequence study should be performed on a larger cohort in the future. WES could detect SNVs and small indels, but could not recognize large indels, gene fusions, epigenetic changes, or post-translational, transcriptional dysregulations; this is another limitation of our study. Nonetheless, our results shed new light on the pathogenesis of tumor metastasis of CSCC, and our findings have implications for its early detection and prevention.

(3) There was no significant difference in somatic mutations and copy number variation (CNV) between primary and metastatic CSCC.

The studies involving human participants were reviewed and approved by the Institutional Review Board of Cancer Hospital, Chinese Academy of Medical Sciences. The patients/participants provided their written informed consent to participate in this study.

QS and DC were employed by the Genetron Health (Beijing) Co. Ltd.

The Supplementary Material for this article can be found online at: https://www.por-journal.com/articles/10.3389/pore.2022.1610325/full#supplementary-material