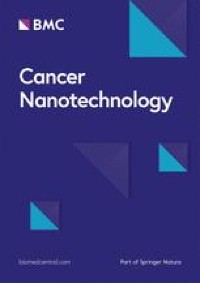 We have previously reported the synthesis of 5-FU-SPION-PEG-PCL-PEG-FA nanoparticles by a modified W1/O1/W2 double emulsion solvent evaporation method (Mirzaghavami et al. 2021). These nanoparticles were synthesized in 5 steps in the following order (Fig. 8).

3 ml of ε-caprolactone (27 mmol) was dissolved in 5 ml of dimethylformamide (DMF) in a three-necked round-bottom flask. Then, 5 µl of ethylene glycol (1 mmol) was added under a nitrogen atmosphere. The reaction temperature was gradually increased to 80 °C followed by addition of stannous octoate [Sn (Oct)2] and increasing temperature to 120 °C. After 24 h, the polymer was precipitated in water at 0 °C and then dried at 40 °C. In order to purify polymer, it was dissolved in DMF and precipitated in water. The product was obtained with 82% yield.

1g of caprolactone (0.2 mmol) was dissolved in DMF and 146 µl (1 mmol) of adipoyl chloride and catalytic amount of triethylamine was added. The reaction was continued for 24 h at 80 °C. Then functionalized polymer was precipitated in water followed by drying in the vacuum oven at 40 °C. The purified product was obtained by dissolution of crude product in DMF and then precipitated in cold water.

1 g of functionalized PCL was dissolved in 10 mL of dimethyl sulfoxide (DMSO) and afterward 206 mg N,N′-dicyclohexylcarbodiimide (DCC) and 122 mg 4-dimethylaminopyridine (DMAP) was gradually added to solution. After 1 h, 2 g of PEG was added and stirred at room temperature for 24 h. PEG-PCL-PEG copolymer was precipitated in diethyl ether and then dried in vacuum oven at 40 °C. To have more purified product, dissolving in DMSO and precipitating in diethyl ether was repeated.

220 mg of folic acid, 103 mg of DCC and 61 mg of DMAP were dissolved in 10 mL of DMSO and the reaction was continued for 4 h to activate acidic group of folic acid. Then 1 g of PEG-PCL-PEG copolymer was added and the reaction was continued overnight. After 24 h, the product was precipitated in diethyl ether and dried at 40 °C. Dissolving in DMSO and precipitating in diethyl ether was repeated to acquire more purified product (Fig. 8).

Characterization of size, zeta potential and morphology of nanoparticles

Dynamic light scattering (DLS) analysis was used to characterize the distribution of the hydrodynamic size of drug-free and 5-FU-loaded nanoparticles. The surface charge of nanoparticles was evaluated by Zeta sizer (Nanoflex, Germany).

The morphology of 5-FU-loaded nanoparticles was investigated using a transmission electron microscope (TEM, Zeiss LEO906, Germany). The samples were prepared on 400-mesh carbon-coated copper grid and imaged at accelerating voltage of 100 kV.

Investigation of in vitro release profile of 5-FU from NPs-FA was carried out based on equilibrium dialysis bag diffusion method at different pH (5.6, 6.8 and 7.4). First, 3 mg of 5-FU loaded NPs-FA was suspended in phosphate buffer saline (PBS) with different pH and transferred to a dialysis bag (MWCO 12,400 Da). The dialysis bag was fully immersed into a tube containing 10 mL PBS and stirred at the shaking speed of 100 rpm at 37 °C. At predetermined time points, 1.5 mL of media was sampled and replaced with an equal volume of PBS. The absorption of released 5-FU was measured using an UV-spectrophotometer at 265 nm.

The CT26 mouse colon cancer cells and BALB/c mice (20–30 g) were purchased from Pasteur Institute of Tehran, Iran. Mice were kept under the standard conditions in accordance with the Helsinki Declaration at the Animal Research Center of Iran University of Medical Sciences, Tehran, Iran. For colon tumor modeling, 2 × 106 of CT26 cells in 100 µL of RPMI medium were injected subcutaneously on the right leg of the mice.

The cellular cytotoxicity of 5-FU and synthesized nanoparticles was investigated using MTT assay. In brief, HUVEC and colon cancer cell lines (HCT116, SW480, HT29 and Caco-2) were cultured in a 96-well plate at a density of 7 × 103 cells per well. After 24 h, the cells were treated with varying concentrations of 5-FU ranging from 0.6 to 80 µM and equivalent concentrations of drug-free and drug-loaded NPs. After 48 h incubation, the cells were washed and treated with MTT (5 mg/mL). Plates were incubated at 37 °C in the dark. After 4 h, the medium containing MTT was removed, and 100 µL of dimethyl sulfoxide (DMSO) was added. The solution was incubated for 15 min to solubilize formazan crystals. The absorbance was measured at 570 nm using a microplate reader (BioTek, Winooski, VT). Finally, cell viability was determined based on Eq. (1):

To compare the cytotoxicity of 5-FU with 5-FU-loaded nanoparticle on the cell lines, the IC50 values of these agents was calculated regarding to cell viability curves and also a therapeutic index was defined as the ratio of IC50 of normal cell to IC50 of cancer cell.

According to MTT results, the most 5-FU-resistant cell line that necessitates using higher dose of drug, was selected for further assessments.

Cellular uptake of NPs-FA in vitro

The cellular uptake of NPs-FA was visually investigated using the Prussian blue staining assay. The HT 29 and HUVEC cell lines were seeded in 6-well plates. After 24 h, both cell lines were incubated with amount of SPION-PEG-PCL-PEG-FA NPs which has capability of encapsulating IC10 of 5-FU against HT29 within 48 h. After treatment time, the cells were washed with PBS for three times, then fixed with 4% paraformaldehyde solution for 20 min followed by staining with the Prussian blue solution (2% potassium ferrocyanide and 2% hydrochloric acid with 1:1 ratio) for 30 min. Subsequently, cells were washed with PBS, and imaged using an optical microscope at the magnification of 400× (Olympus CK2; Olympus Optical Co., Tokyo, Japan).

In order to quantitatively evaluate the cellular uptake of NPs-FA, both cell lines were cultured in T-25 cell culture flasks at a density of 5 × 105 cells, treated in the same way as described before. After treatment, the cells were washed with PBS, trypsinized, collected and counted for quantification purposes. The cells were digested with 1 mL of concentrated HNO3 at 140 °C for 2 h. The samples were diluted to 5 mL with deionized water and the concentration of iron was measured using an ICP-OES assay (VISTA-PRO, Varian, Australia). Finally, the average iron content per cell was calculated.

Cellular uptake of NPs and NPs-FA in vivo

The accumulation of NPs and NPs-FA in colon tumor tissues was assayed by Prussian blue staining. The mice were injected with 20 mg/kg NPs with/without drug (containing 1 mg/kg of free 5-FU) through the tail veins 14 days after tumor implantation. For magnetic drug targeting, the magnets with magnetic intensity of 1.3 T were placed on the mice colon tumor for 1 h. Tumoral mice were killed 1 h after the injection of nanoparticles with or without folic acid and magnetic targeting. For magnetic drug targeting, the magnets were placed on the mice colon tumor for 1 h. After, the tumor tissues were fixed in formalin solution (10%) for 48 h at 25 °C. The samples were dehydrated in different concentrations of ethanol, embedded in paraffin, cryosectioned, and stained with Prussian blue solution. The sections were incubated with a mixture of 10% potassium ferrocyanide and 20% hydrochloric acid for 20 min, then washed and stained with Nuclear Fast Red.

In vivo antitumor effects of nanoparticles

(Only mice in the treatment groups that received the nanoparticles were exposed to the magnetic field for one hour.) The mice were treated with 5-FU and NPs-FA with/without drug injections through the tail veins every other day (12, 14 and 16 days) of the experiment with 1 mg/kg of free 5-FU and 20 mg/kg of NPs-FA (containing 1 mg/kg of 5-FU). After the treatments, the tumor size was measured daily and the tumor volume was calculated by the following equation:

Furthermore, the 6 mice in each group were monitored for life span and analyzed by the Kaplan–Meier survival curves.

The results of all experiments were expressed as mean ± standard deviation and analyzed using one-way analysis of variance (ANOVA) followed by Tukey’s test using Graphpad prism 6. A P-value of 0.05 or lower was considered to be statistically significant.