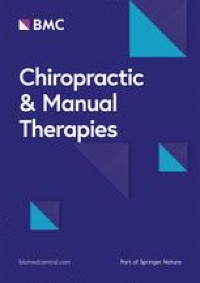 Data from a randomized controlled trial (RCT) with12 months follow-up of the BJORN trial were used. The trial was approved by the Ethics Committee of the Karolinska Institutet (Diary number 03-657) and registered in a public registry (Current Controlled Trials ISRCTN 569 54776).

The BJORN-trial is extensively described previously [13, 14]. Briefly, it is an RCT comprising 409 persons with non-specific pain and disability in the back and/or neck, recruited at two large public companies (n = 40,000) in Stockholm, Sweden. Inclusion criteria were pain and disability in the back and/or neck that brought about marked dysfunction at work or at leisure and had lasted for at least 2 weeks. The two interventions were MT, including spinal manipulation/mobilization, massage and stretching (index group), and ASA; information on the importance to stay active and on how to cope with pain, according to the best scientific evidence available (control group). The advice on staying active was general. The MT group received a maximum of six treatments (within six weeks), by one of eight manual therapists (naprapaths). Naprapaths are a licensed group of manual therapists common in the Nordic countries, and the treatment was a combination of manual techniques such as spinal manipulation and mobilization, and soft tissue techniques such as massage and stretching, in combination with home exercises. The treatments and the advice on home exercise and ergonomics were adapted to each person’s condition. The control group received ASA provided by physicians in direct conjunction with the medical examination that all study participants had at baseline, before inclusion in the trial. A second consultation with a physician was scheduled after 3 weeks, and additional consultations were offered if necessary.

All outcomes were self-rated by repeated postal or web-based measurements questionnaires up to one year after inclusion. The primary outcomes were a clinically meaningful improvement in pain intensity and pain related disability [29], calculated by comparing the results of measurements with the Chronic Pain Questionnaire (CPQ) [30], with three items on pain and three on disability [31, 32], with numerical 11-point rating scales [33, 34] for each participant. A pain score was constructed from the mean of the three pain items and a disability score from the mean of the three disability items. For the analysis in this study, effectiveness measures from the one-year follow-up were used. The Short Form-36 Health Survey SF-36 [35] was used to calculate Quality of Life (QoL). A condensed version with 6 out of the 8 dimensions from the SF-36 (the SF-6D) contains an algorithm which makes it possible to derive QoL [36]. Further, the change in pain intensity from baseline to one-year follow-up was used.

Direct costs included costs for interventions and drugs from “Prices and compensations for the health care region of Stockholm/Gotland”, from Karolinska Hospital. The question about health care consumption and use of medication were included in the questionnaires and read: “Please report which of the health care/investigation options you sought for the disorders of the neck/back in the last 6 months, in addition to what was included in this trial”. Answer alternatives: (1) I have not sought any health care/investigation, (2) Physiotherapist, (3) Naprapath, (4) Chiropractor, (5) Massage therapist, (6) Medical doctor, (7) Investigations such as radiography or similar, (8) Other. The participants were also asked to specify the number of visits for each alternative. As regards the use of medication, the participants were asked whether they had taken medications/natural supplements because of back/neck pain, and if so, how often. The costs were valued using prices provided by the pharmacy. Indirect costs included costs of production loss due to sick leave. Information on salaries for different occupations were calculated according to Statistics Sweden (SCB). The production loss was calculated as number of sick leave days/365 * yearly salary * 1.41 which is the average social fee for workers in Sweden, using the human capital approach [37].

All costs were collected in Swedish crowns (SEK) for the year 2005 (which corresponds to the period in which the RCT was conducted) and adjusted for inflation using the consumer price index, to reflect prices for the year 2019/20. The exchange rate used to convert costs into EUR was 1 SEK = 9.29 EUR. No discounting was applied since the interventions and the follow-ups occurred within one year.

The societal perspective on the impact of resource use was followed when conducting the economic evaluation. This implies that all relevant costs and effects of the interventions related to non-specific back and neck pain in participants are considered, regardless of who pays or benefits. Data from the participants who withdrew from the trial were used until the time of withdrawal. Costs and utilities were analyzed within a one-year horizon, since the RCT followed participants for one year.

For decision-making purposes, the ICER is useful when the intervention is more costly but generates improved health effect. In such cases there is a need to compare the ICER with a pre-determined threshold to decide whether choosing the intervention is an efficient use of resources. Another method is to use the net benefit approach and generate acceptability curves. A cost-effectiveness acceptability curve (CEAC) was used in the present study, to depict the probability that the intervention will be cost-effective at different willingness to pay (WTP) thresholds. A net monetary benefit (NMB) represents the value of an intervention in monetary terms, and a WTP threshold for a unit of benefit (the incremental benefit multiplied by the WTP threshold less the incremental cost) was also calculated.

The statistical analysis described above was repeated for the outcome “change in pain intensity” derived from the Chronic Pain Questionnaire (CPQ) (30). All analyses were performed using Microsoft Excel and SPSS.

The robustness of the findings was assessed by performing sensitivity analyses. One sensitivity analysis was performed by using multiple imputations to impute missing data on costs and QoL in both groups, according to the Fully Conditional Specification by a Linear regression method. In the multiple imputation procedure, five imputed data sets were created. The Output Management System (OMS) utility in SPSS was applied to produce pooled estimates of means, standard errors and 95% confidence intervals (CI) of variables of interest in the two groups. In this study, we were interested in the effect of QoL from being allocated to the index group considering the cost or resources required to yield a change in QoL. Thus, we explored the impact of the missing values of study participants behaving like those in the index group in the two arms of the trial on the results in the sensitivity analysis. We performed a reference-based imputation which draws imputed values with some reference to observed data in the other group of the trial.

More generally, our statement about unobserved patient data is that they were missing at random. Therefore, the marginal distribution of the unobserved data will be the same as the conditional distribution of the unobserved data given the observed data will be the same, regardless of whether the data was observed or not. Based on the difference in mean cost and QoL per person between the index group and the control group, we could say that the claim was respected since the results from the sensitivity analysis show no appreciable differences from the main analysis.

Another sensitivity analysis was performed by excluding the costs for participants whose total costs were exceeding three standard deviations of the average costs for the treatments in both arms. Some participants had to undergo surgery and other expensive treatments during the trial period, which supported the decision for conducting a sensitivity analysis based on exclusion of these participants. An ICER and a CEAC were also obtained using the same procedures as in the main analysis.