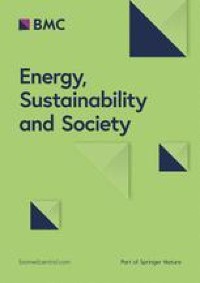 This study was based on surveys conducted in rural areas of Hubei province, China. To obtain the data, we designed a detailed questionnaire, which was then modified by the relevant experts in agricultural resource economy from Hubei Rural Development Research Center. The experts considerably improved the logic and language. A pre-test was conducted among 20 farmers in our targeted area of study to boost the validity, accuracy, and credibility of our data. Based on the pre-test results, we deleted few invalid questions, modified the language, and added some interview questions to obtain the final version of the questionnaire, which had six parts.

The first part captured the details of infrastructure and living conditions in the villages, including the terrain where the households were located and the closest town or market. The second part entailed personal and household characteristics such as gender, age, education, and total household income. The third part covered rural biogas utilization such as social learnings, interpersonal trust, and the adoption of biogas utilization. The fourth part evaluated the extension of agricultural technologies, whereas the fifth part collected information on farmers’ participation in social activities and their waste disposals. The final part mainly measured self-happiness of farmers and their perceptions of different situations. Additional file 1 is part of the survey questionnaire translated from Chinese into English.

The data used in this study were collected from a household survey conducted in rural areas of Hubei province, China, in August 2018 using a multistage systematic random sampling procedure. First, four cities were randomly selected: Huanggang city, Wuhan city, Ezhou city and Jingmen city. Second, one to two counties or districts in each city were randomly selected. The selected counties or districts cover the main landforms in Hubei province, which range from hills to mountains and plain. The reason for selecting counties or districts at random with respect to the main landforms was that the use of biogas varies with household location in different landforms [2, 44]. Third, three to five towns in each county or district were randomly selected. Finally, one village in each town per county or district was randomly selected. In this stage, we obtained a household roster for each village from the local government and randomly selected households for interview. Interviews were conducted by team members from the School of Economics and Management, Huazhong Agricultural University. All the members had rich experience in rural investigation and were professionally trained before the survey was conducted. Supervised face-to-face interviews were conducted with an adult member of the sample households.

In this research, the dependent variable was dichotomous, with 1 indicating that the ith farmer had used residue-based biogas (yi = 1), and 0 indicating otherwise (yi = 0). The binary logit model is one of the most widely used statistical models for dealing with the relationship between dichotomous dependent variable and multiple continuous or categorical independent variables [47]. Therefore, this paper used a binary logistic model to deal with discrete outcomes, assuming that the ith farmer had or had not used a distribution Pr(yi). Pr(yi) is believed to be affected by a vector of key explanatory variables (Xi) (e.g., OB, and positive and negative WOM), interpersonal trust (Ii), and the interaction terms between the learnings and interpersonal trust (XiIi). To avoid potential endogeneity due to omitted variable biases, we added other factors to the model as a vector of control variables (Zi) that may explain the differences in the biogas use probability among the farmers. These factors included demographic variables, personal perceptions, and geographic locations [34, 48]. Furthermore, it is assumed that Pr(yi) is influenced by an error term μi. The corresponding set of parameters is {β1, β2, β3, β4}, where β0 is the intercept. It is considered that Pr(yi) is determined by the aforementioned factors through a nonlinear link function F that maps the unbounded index.

where F is the logistic cumulative density function ((Lambda)) that produces the logit model. Thus,

To investigate potential multicollinearity affecting the result, we calculated the variance inflation factor (VIF) for the binary logistic model with all variables included in the regression estimation except the interaction terms, and the calculated results are shown in Appendix 1. The VIF scores range from 1.04 to 3.24.Footnote 1 Campbell et al. [49] demonstrated that a multicollinearity problem exists when VIF is greater than 5. Thus, the multicollinearity test result was acceptable in our study. Furthermore, the robust standard error procedure was used in this paper in order to obtain unbiased standard errors under heteroscedasticity. We also used OLS and probit approaches to check the robustness of the binary logistic estimates.

According to previous studies, coefficients in nonlinear regressions (e.g., logit) cannot be used to infer the statistical significance of an interaction term and its underlying variables [50, 51]. The marginal effect of the interaction term varies not only in sign, but also in magnitude and statistical significance with the values of other explanatory variables [51]. The interpretation of logistic model coefficients has certain pitfalls and is less intuitive than linear model estimation. Hence, in this paper, the marginal effects were calculated using the “delta” method in Stata. As the relationship between the probability of social learning and residue-based biogas use is nonlinear, the marginal change could be presented by the tangent to the probability curve:

Since only dummy variables were involved in the interaction terms, the marginal change in this paper was presented as follows:

For the main explanatory variables in this paper, OB refers to the process of observing as other individuals use residue-based biogas. Observing others is a behavior-based social interaction that farmers can use as a reference when making choices from an overwhelming number of options. OB may also update personal experience of farmers and beliefs about the profitability of the technology based on the profitable signal from the adoption behavior of others [52]. Consequently, although the profits and utility of others’ use are unknown, OB may increase the probability of farmers using residue-based biogas.

Farmers in rural areas rely on various cues, including WOM, to acquire technology information in their immediate social circles. In this paper, positive WOM refers explicitly to the process of learning via communication from the positive experiences of others who have used residue-based biogas. This learning method may inform the beliefs of farmers about the strengths, expected quality or profit, and other positive effects of the technology. It could also increase the exante confidence of the farmers in the expected utility of the technology. Therefore, positive WOM may increase farmer use rates. On the contrary, negative WOM refers to the process of learning via communication from the negative experiences of farmers’ use of residue-based biogas. This type of learning may enhance the perceptions of farmers on the disadvantages and potential problems of residue-based biogas. It may also constitute a noisy signal about the profitability of this technology, thus increasing use uncertainty among the farmers. Therefore, negative WOM may reduce the probability of farmers using the residue-based biogas.

In this paper, interpersonal trust is defined explicitly as farmers trust the opinion or decisions of others on residue-based biogas. According to Sol et al. [25], interpersonal trust facilitates the relationships between types of social learning and individual behaviors in the face of ambiguity and unstructured nature of decision-making problems. Embedded within cohesive groups marked with closure, farmers are likely to learn about residue-based biogas from others. This, in turn, can indicate that they have trust in other farmers, and the more individuals trust the information provider, the more likely they are to transform the knowledge obtained from the provider into practice. Consequently, the use behaviors of farmers tend to be consistent. Therefore, interpersonal trust may mediate the relationships between types of social learning and the use of residue-based biogas.

As aforementioned, the dependent variable was farmers’ use of residue-based biogas, while the key independent variables were OB, positive and negative WOMs and the interaction terms between the learning types and interpersonal trust. Several factors serve as control variables to rule out alternative explanations. Gender, age and education of the respondents were controlled because the characteristics of farmers have been shown to inevitably correlate with the uptake of biogas technology [6, 34]. Furthermore, household labor and total household income were used as control variables because labor [43] and family income [48] are all determinants of clean energy consumption by households. Sun et al. [44] found that biogas subsidy is critical in biogas utilization, hence we included a dummy variable subsidy into the regression analysis. Moreover, risk and personal perceptions served as control variables because they promote biogas dissemination [53]. Meeks et al. [2] reported that biogas projects are generally unsuited for mountain regions due to temperature requirements to operate them, whereas Sun et al. [44] revealed that biogas users are more likely to be located in hilly areas than plains. Accordingly, in this study, we controlled household location heterogeneities to reduce the error in the regression analysis caused by landform factor disunity.

Finding the Location of Axonal Activation by a Miniature Magnetic Coil

Sources of Energy Poverty: A Factor Analysis Approach for Spain