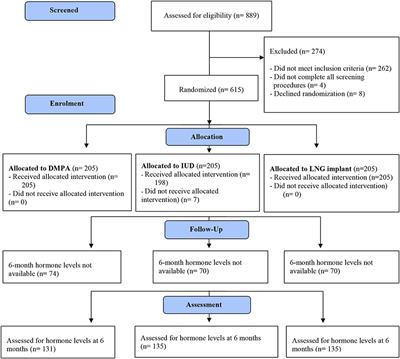 Hormonal contraception has complex effects on users’ endocrine systems. Apart from the direct effects of the exogenous contraceptive hormones, circulating levels of endogenous sex steroid hormones are modified. It is important to have accurate data on the effects of alternative contraceptive methods in order to counsel women appropriately on the relative benefits and risks of different methods, to understand the potential clinical impact of these effects, and to guide future development of safer contraceptive methods.

Estrogens have multiple physiological effects such as on metabolism, menstruation, coagulation, bone health, the cardiovascular system (1) and the vaginal microbiome (2), and are also associated with adverse effects such as increasing susceptibility to candida albicans infection (3, 4). In addition, sex steroid hormones have important neuropsychological and behavioral effects. Hormones of the hypothalamic-pituitary-ovarian (HPO) axis are thought to play a role in depression (5). However, the relationships between sex hormones and psychological wellbeing are complex and poorly understood (6). Estradiol has neuromodulator effects on brain regions involved in mood and behavior (7). In a comprehensive 2021 systematic review, estradiol levels were found to be lower in women with premenstrual dysphoric disorder and postpartum depression, but not perimenopausal depression nor depression unrelated to reproductive transition phases (5).

Sexual function has been found to deteriorate with decreasing ovarian function, and to be improved by hormone replacement therapy with estrogen (8). Estradiol is also considered to play a positive role in sexual desire and arousal in premenopausal women (9). Use of hormonal contraception is associated with reduced libido and changes in sexual function. In a previous randomized trial, we found reduced sexual activity among participants randomized to injectable progestogens vs. the copper T 380 intrauterine device (IUD) (10, 11). The etonogestrel implant and the DMPA-IM have been associated with impaired sexual function ascribed to suppressed estrogen and/or androgen levels (12, 13).

Several observational studies have reported on estrogen levels in women choosing to use various hormonal contraception. Such studies are intrinsically subject to confounding. We are not aware of any studies comparing effects of the depot medroxyprogesterone acetate intramuscular (DMPA-IM) injection, the copper IUD and the levonorgestrel (LNG) implant on estradiol levels conducted in the context of a rigorous randomized clinical trial (RCT). The Evidence for Contraceptive Options and HIV Outcomes (ECHO) study (14, 15) presents a unique opportunity to compare hormonal levels between participants randomized to these methods.

This is an ancillary study of the ECHO study, limited to participants enrolled at the Effective Care Research Unit site in East London, South Africa. The ECHO study protocol (15) and primary paper (14) have been published elsewhere. Briefly, Human immunodeficiency virus (HIV)-uninfected women requesting contraception aged 18–35 years who indicated that they had not used injectable hormonal contraception in the preceding 6 months, were randomly allocated to receive DMPA-IM, the copper IUD or the LNG implant, and were followed after 1 month then 3-monthly for 12 to 18 months. Blood samples were collected at baseline and at the 3-monthly visits, separated on site and the serum stored at −80°C in the BARC-SA Bio Repository in Johannesburg. For this ancillary study, only baseline and samples closest to 6 months were studied.

The original ECHO Trial was approved by ethics committees at all the participating sites. The application for additional tests on stored biological samples was approved by the Human Research Ethics Committee, University of the Witwatersrand on 6 May 2019, reference 141112. All women provided informed, written consent to authorize study participation.

Laboratory tests were conducted by BARC-SA (Pty) Ltd. Estradiol (E2) levels were measured on stored samples for participants at baseline and closest available sample to 6 months, using a delayed one-step immunoassay for the quantitative determination of estradiol in human serum and plasma using chemiluminescent microparticle immunoassay (CMIA) technology. The few results above or below the detection level of the assay were assigned the value of the upper or lower limit of the assay respectively.

The laboratory data were entered into a secure Microsoft Excel spreadsheet, cleaned and merged with data from the original ECHO study database for analysis, using EpiInfo software. Baseline data were compared to ensure that the comparability of the groups was not compromised by loss to follow-up. Six-month values were compared with baseline values for each group. Pairwise comparisons were made between the three groups by allocated method at 6 months (intention to treat analysis). Statistical comparisons were by analysis of variance if the distribution of the data was normal, otherwise by the Mann-Whitney U test.

Of 615 participants enrolled at the East London site, results for hormonal studies were available for 401 (65%) participants both at baseline and at 6 months. The CONSORT flow diagram is shown in Figure 1. Baseline characteristics of participants are displayed in Table 1.

Retrospective random testing of baseline blood of 157/615 enrolled participants for evidence of recent hormonal contraceptive exposure found quantifiable medroxyprogesterone acetate in 85 (54%), levonorgestrel in 9 (5.7%), norethisterone in 7 (4.5%) and etonogestrel in 1 (0.6%). In view of the stringent randomization process, these effects are likely to be similar between the randomly allocated groups. Given the potential for distortion of baseline hormone levels due to prior contraceptive exposure, we primarily compared absolute differences between randomized groups at 6 months rather than change from baseline. Prior exposure to progestogen contraception would result in under-estimation of the changes observed in the progestogen group, as well as apparent changes in the copper IUD group in the opposite direction of the progestogen effects.

This study quantifies for the first time using RCT methodology the differences in levels of endogenous estradiol in young women (18–35 years) randomly allocated to receive the DMPA-IM injection, the LNG implant or non-hormonal contraception (the copper IUD). At 6 months, the median estradiol levels in women using both progestogen contraceptives were in the postmenopausal range. The striking finding was the significantly greater reduction in estradiol in women allocated to DMPA-IM injection than to the LNG implant. While the data for the LNG implant would represent the steady-state LNG effect, the samples were collected at the time of a DMPA-IM injection, and thus represented the nadir DMPA-IM effect. The average effect of DMPA-IM over time would be expected to be an even greater reduction in estradiol levels.

Although an inclusion criterion for enrolment in the ECHO study was no injectable contraception in the last 6 months, retrospective spot checks conducted during the main study indicated that a proportion of women had evidence of persistent DMPA or norethisterone levels. Considerable discrepancies between self-reported and biologically confirmed prior contraceptive exposure have been reported in other studies (17). In addition, use of oral contraception was permitted up to the day preceding enrolment. It is therefore likely that some women in all groups had some estradiol suppression at baseline. This assumption is consistent with the (non-significant) increase in estradiol levels in the IUD group at 6 months. Therefore, the reductions from baseline estradiol in the hormonal method groups may be an under-estimate of the true suppressive effect of the methods. For this reason, while we have included the baseline estradiol levels to confirm comparability of the groups, we have primarily compared absolute levels at 6 months between groups rather than changes from baseline.

In conclusion, the significant reduction in endogenous estradiol with the LNG implant, and the significantly greater reduction with DMPA-IM have relevance to the estradiol-related physiological and psychological side-effects and beneficial effects of these methods. While data on the relationship of sex steroids to clinical parameters are not consistent, these effects might include menstrual cycle disruption, bone health, cardiovascular health, vaginal microbiome, candidiasis susceptibility, mood and sexual experience.

The data that support the findings of this ancillary study of the ECHO Study are available from the corresponding author upon reasonable request. Access will be granted if the concept is evaluated to have scientific merit and if sufficient data protections are in place. As of the time of publication, data access applications are in process with the governing institutional review boards of the ECHO Study to make de-identified data from the primary ECHO dataset publicly available. Requests to access these datasets should be directed to justhof@gmail.com.

GH, MS-M, and JB were involved with conception, design, and conduct of the study. GH and YB performed the statistical analysis. GH wrote the first draft of the manuscript. RR, AM, and CM contributed to subsequent drafts. All authors have read and approved the manuscript.

This work and the Evidence for Contraceptive Options and HIV Outcomes (ECHO) Study were made possible by the combined generous support of the Bill & Melinda Gates Foundation (Grant OPP1032115), the American people through the United States Agency for International Development (Grant AID-OAA-A-15–00045), the Swedish International Development Cooperation Agency (Grant 2017/762965–0), the South Africa Medical Research Council, and the United Nations Population Fund. Contraceptive supplies were donated by the Government of South Africa and US Agency for International Development. The hormonal assays were funded by a grant from Botswana Harvard Partnership.

The contents of this paper are solely the responsibility of the authors and do not necessarily reflect the views, decisions or policies of the institutions with which they are affiliated, the ECHO trial funders, or the supporting governments.

We would like to thank all study participants and acknowledge the contribution of the ECHO Trial Consortium.