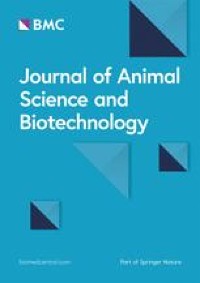 The experimental protocol was approved by the Animal Ethics Committee of Nanjing Agricultural University. The project number is 31972638. The sampling procedures according to the “Guidelines on Ethical Treatment of Experimental Animals” (2006) No.398 set by the Ministry of Science and Technology, China.

The chicken model employed in this study is a locally bred chicken line used for meat production in China. Eighty 1-day-old male Yellow-footed chickens were purchased from Changzhou Lihua Livestock and Poultry Co., Ltd., and randomly divided into normal (LD) and constant (LL) photoperiods for the 1st week after hatching. Light regime in LD group was 12 h light: 12 h dark, with light on at 07:00 h and off at 19:00 h; light regime in LL group was 24 h light:0 h dark. The light intensity was about 200 lx for both groups in the first week, due to the illumination from the heat lamps. From 8 d to 21 d, chickens from both groups were maintained under the same light regime (12 L:12 D) until the end of the experiment (21 d). The light intensity was about 80 lx for both groups from the second week when the heat lamps were removed. The birds in LD and LL groups were housed in 2 adjacent rooms with the same condition except the lighting regime set for each group. Birds in each room were housed in 2 individual cages with 20 birds per cage for the 1st week, and then distributed into 4 cages with 10 birds per cage thereafter till the end of the experiment. Feed and water were provided ad libitum. The room temperature was set according to the standard established by the breeding company. In detail, the temperature was 35 °C for the first 2 d, 32–34 °C from 3 to 7 d, 30–32 °C from 8 to 14 d, and 27–30 °C from 15 to 21 d. The feed consumption per cage was recorded daily, and body weight was recorded every week. By the end of the experiment, chickens were anesthetized with sodium pentobarbital and the brain was quickly separated from the skull. The brain was separated in the middle and both hemispheres of the rostral and caudal hippocampus were dissected as described in a previous publication [29] according to the chicken brain atlas [30]. Both hemispheres were combined and frozen immediately in liquid nitrogen and stored at − 80 °C until use. The tissue was homogenized, and part of the homogenate was used for mRNA or protein extraction. All chickens were killed by rapid decapitation that is considered acceptable for euthanasia of birds according to American Veterinary Medical Association (AVMA) Guidelines for the Euthanasia of Animals: 2013 Edition.

On 7 days of age, chickens from both groups were captured from their home pen and carried individually to the adjacent room where the behavior tests were performed. Open field test, balance beam test, and the tonic immobility test were carried out to explore the effects of constant light on fear-related behaviors in chickens.

The chicken to be tested was placed in the center of a 58 cm × 58 cm open field box with sides 70 cm high. This box was made of white wood and the floor was marked off into 25 squares of 12 cm × 12 cm each, illuminated by a 100 W overhead bulb [31]. After the test for each chicken, the floor of the box was cleaned with towels wetted with 70% ethanol. The behavioral performances were filmed with the observer standing out of the view of the tested chicken. The recorded videos were then analyzed by a fellow student who was not aware of the experimental design. The time of the first step, the counts of grid crossed, defecation, steps, escape attempts and vocalizations with 10 min of observation were recorded for statistical analysis.

The test was conducted using an elevated narrow balance beam (6 cm wide and 35 cm long). The balance beam was 22 cm high, so that chicks could jump down onto soft bedding without injuring themselves. The balance beam was used to assess fear-related behaviors, similar to the test in rodents [32]. The test was performed as follows. Each chick was placed on the starting line at one end of the balance beam and then allowed to walk. We recorded the following parameters: (i) the time of the chick stayed on the beam and (ii) the distance the chick walked on the beam. If a chick stayed on the starting line or was afraid of walking on the beam, it received a score of 0 and scored as 120 s.

Chicks were placed on their backs in a metal cradle and restrained for 10 s to induce tonic immobility (TI) by the experimenter placing one hand on the bird’s chest and another over its head with the head hanging down. Chickens that did not remain still for 10 s were allowed maximum 5 times to induce TI. TI was successfully induced for all the chickens used in this study in less than 5 times, and the exact duration of the successful TI was recorded. When the chicken remained still for over 6 min, the TI test was terminated and the TI score for this chicken was 6 min.

Measurement of corticosterone, melatonin and 5-hydroxytryptamine

All data are presented as means ± SEM. The behavior data were analyzed using U-Test, and the hormones and gene expression data were analyzed by T-Test for independent samples with SPSS 20.0. The differences were considered statistically significant when P < 0.05.