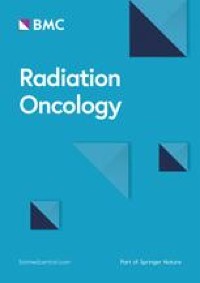 The aim of this study was to determine the PTV margins required to accommodate intrafraction motion of the mesorectum (CTVmeso) and the gross tumor volume (GTVprim) during MRIgRT of rectal cancer and to determine if performing a 2nd adaptation prior to irradiation would potentially be beneficial.

Kleijnen et al. studied the motion uncertainty as a function of time of CTVmeso and GTVprim using repeated cine-MRI data of 16 patients [10]. They found PTV margins of 12 mm for intrafraction motion up to 18 min which were comparable in magnitude to margins found for interfraction motion [10]. The differences are likely due to the use of different coverage criteria. In the study of Kleijnen et al., the distance that incorporates 95% of the surface voxels at the investigated time point was required to fit within the margin in 90% of all fractions. In our work the margin was selected for an average volumetric coverage of 95% in 90% of all patients.

With regards to PTVprim, our findings are in line with previous studies [33, 34]. Van de Ende et al. studied the inter- and intrafraction displacement of the GTV based on fiducial markers on cone beam CT images and reported PTV margins of 3.0 mm in left–right direction, 4.7 mm in anterior–posterior direction and 5.5 mm in cranial-caudal direction for intrafraction displacement [33]. In addition, they showed larger motion for proximal tumors as compared to distal tumors and hypothesized that the reduction of required margins may be higher in patients with a proximal compared to a distal tumor.

More recently, Eijkelenkamp et al. determined margins to compensate for intrafraction GTVprim motion during online adaptive procedures [34]. They used a similar method as the current study to determine the required margin for online adaptive MR-guided dose escalation for intermediate risk rectal cancer patients and reported a margin of 6 mm for the entire treatment, which could be reduced to 4 mm for a procedure of 15 min or less. These findings are consistent with the PTV margins found in current study.

Although intrafraction motion for CTVmeso and GTVprim has been studied previously, the current study also explores the potential benefit of intrafraction motion management during MRI-guided radiotherapy to reduce the required PTV margins. As shown in the results, adapting just prior to the start of irradiation instead of only at the beginning of the treatment possibly provides a more accurate estimation of the anatomy during irradiation in some cases, given the shorter time interval between MRIver and MRIpost compared to MRIadapt and MRIpost. For GTVprim relatively more 2nd adaptations were needed to achieve a margin reduction of 30%. This may possibly be attributed to the larger observer variability for the primary tumor as compared to mesorectum [35]. In addition, when considering the number of 2nd adaptations and the resulting margins for different verification envelopes as depicted in Fig. 3, one can make a tradeoff between the workload and the benefit of motion management to reduce the required margins.

When assessing the effect of the margin reduction on bowel toxicity, we showed that the volume of the bowel receiving 95% of the prescribed dose (23 Gy) is reduced with only 16.0 cm3 after performing 2nd adaptations. Both before and after 2nd adaptations, the volume of bowel area receiving 23 Gy was lower than the upper limit of 85 cm3 recommended by adapted Quantitative Analysis of Normal Tissue Effects in the Clinic (QUANTEC) guidelines [36]. Considering this, the clinical impact of margin reduction as a result of 2nd adaptations might be limited for dose reduction to the bowel. Overall the choice to treat a patient on a MR-Linac systems is carefully considered by clinicians weighing the clinical benefits against the added time and workload. With daily online adaptation and motion management where needed the treatment is tailored to each patients’ anatomy, allowing for more accurate RT, reduced margins and possibly dose escalation.

In this study we introduced a verification envelope (VE) for deciding when to perform a 2nd adaptation. The coverage threshold based on this VE replaces the common practice to take action if the target moves out of the PTV. As demonstrated in the results, the required PTV margin is typically not identical to the VE. Using the PTV margin as envelope can result in performing either too few or too many 2nd adaptations than necessary. The concept of a VE is consistent with motion management techniques such as automated beam gating [37] and target tracking [38] as these are solely based on movement of the target outside of a pre-specified threshold, and do not inherently use the PTV margin for this purpose. Up to date there is one study by Chiloiro et al. [14] demonstrating the clinical feasibility of beam gating in rectal cancer with a region of interest set around the mesorectum.

At the time of adapting for the 2nd time, the patient has been on the treatment table for a while and may be more relaxed, possibly resulting in a reduced amount of motion as compared to the first adaptation. An option to limit the adaptation time might be to opt for a less accurate and faster approach such as Adapt to Position [23]. However, a downside is that the Adapt to Position approach only corrects rigid translations of the target volume. Nevertheless, the exact implications of the duration of 2nd adaptation remain to be studied further. Speeding up the first adaptation, specifically delineation, might be the ideal solution. However, automation methods such as auto contouring are still in development.

The criteria for margin determination were based on volumetric coverage and not statistical inferences from accumulated dose as is done in deriving the classical margin recipes [40, 41]. For a comparison with these recipes the local standard deviation of the positioning error should have been determined. However, to translate this into a margin, assumptions on the dose distribution, local distribution of positioning errors and target deformation have to be made. Our volumetric approach is considerably easier to interpret and requires only the choice of a coverage criterion. However to formally asses that, a dose accumulation study needs to be performed. Because of the heuristic nature of these choices we also provided results for different coverage criteria.

Could microalgae offer promising options for climate action via their agri-food applications?

Genomic insight into the integrative conjugative elements from ICEHpa1 family

Modification of bladder thermodynamics in stress urinary incontinence patients submitted to trans-obturator tape: A retrospective study based on urodynamic assessment