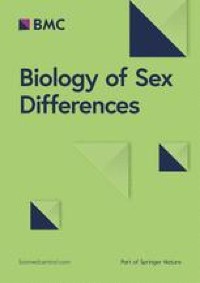 This study investigated sex differences in the in-vivo forearm VC regulation in young healthy humans. The in-vivo regulation of VC is a continuous balance between sympathetic vasoconstriction and endothelial-mediated vasodilation [10]. The precise regulation of VC is essential for controlling tissue BF and systemic blood pressure [11]. The interaction between sympathetic vasoconstriction and endothelial-mediated vasodilation was evaluated by assessing the sympathetic-mediated blunting of forearm vasodilation after a brief period of ischemia. It was also assessed whether any sympathetic-mediated restriction of vasodilation blunts tissue BF and re-oxygenation after circulatory reperfusion in both sexes. Our data may agree with previous investigations suggesting that women have blunted transduction of sympathetic activity into vasoconstriction compared to men. Indeed, TPR was augmented in response to CPT-induced SYMP in men but not in women. Although the higher brachial artery FMD found in women compared to men may lead to the initial conclusion that women have greater endothelial-mediated vasodilation, this non-normalized result is biased by the smaller baseline brachial artery diameter in women. Indeed, no sex differences in brachial artery FMD were found after normalization to baseline diameter (details below). The percent increases from baseline of peak and average forearm VC after circulatory occlusion, at rest, were similar between sexes. Interestingly, such increases were also similar between sexes during SYMP, regardless of the fact that women showed a blunted increase in TPR in response to SYMP. Thus, as shown in Fig. 3, sympathetic-mediated restriction of vasodilation was similar between sexes. The percent increase from baseline of the average brachial artery BF after cuff release was also similar between sexes at rest and during SYMP. Although SYMP restrained the average forearm VC increment over the 60 s after release of circulatory occlusion, such a restriction did not impair the normal hand re-oxygenation that occurs in that time frame in both sexes.

CPT was used to induce SYMP. CPT is a painful stressor that elevates blood pressure mainly due to peripheral sympathetic vasoconstriction [21]. This stimulant was used in several investigations to assess the sympathetic-mediated blunting of nitric oxide-mediated endothelial vasodilation [18, 19, 22]. The specific timing of application of the CPT stimulus used in our experimental protocol was taken from the study by Dyson et al. [19] to have a direct comparison between previous findings and our own. CPT-induced SYMP has been shown to blunt the normal brachial artery vasodilation upon release of circulatory occlusion [18, 19, 22]. Other non-invasive sympathetic stimulants such as mental arithmetic tasks, lower body suction, and muscle chemoreflex activation failed in this intent [19]. The percent increase from baseline of forearm VC following reperfusion was considered the main research outcome in our study. Increases in VC provide information on the global vasodilation of the forearm, including changes in resistance arterioles and pre-capillary arterioles. Restrictions in the normal forearm VC increase after a brief period of ischemia can potentially affect BF towards the hand and, thus, the hand re-oxygenation in that time frame. The brachial artery FMD was a secondary research outcome in our study. It provides information on nitric oxide-mediated endothelial vasodilation, which has been associated with coronary artery endothelial function [23]. However, brachial artery FMD does not provide information on the precise regulation of BF towards the hand [24]. Hemodynamic changes were calculated via the ModelFlow algorithm of Portapres. This algorithm has been widely validated and used in research [25, 26]. It uses a statistical model of the human circulation to calculate the hemodynamic parameters from the finger arterial pressure waveform.

Our data show that TPR after cuff release was augmented in men but not in women during CPT-induced SYMP compared to at rest (Fig. 4A). This finding may agree with the results of a previous study that sought to quantify leg sympathetic vasoconstriction in response to CPT in young individuals [17]. CPT induced a blunted decrease in femoral vascular conductance in young women compared to young men, consistent with the notion of a blunted increase in regional peripheral resistance in women [17]. Other studies also showed that sympathetic stimulants induce less vasoconstriction in women compared to men [2]. A blunted increase in TPR in women may agree with the notion that women have blunted transduction of MSNA into vasoconstriction compared to men [2,3,4]. Indeed, a lack of relationship between MSNA and TPR in women but not in men has been documented [2]. Moreover, women have been suggested to have lower autonomic support of arterial blood pressure control compared to men, as women show a lower arterial pressure drop in response to autonomic blockade compared to men [27]. In our study, men reported higher absolute values of MAP during SYMP compared to women. However, men also reported (not statistically significant) higher values of MAP than women at baseline. After normalization to baseline values, SYMP resulted in similar percent increases of MAP between sexes (Fig. 4B). These results support the notion that the use of absolute values may lead to misleading conclusions if differences in baseline values between sexes are not accounted for. The heart rate was increased during SYMP compared to at rest in both sexes. This finding is consistent with the positive chronotropic effect of sympathetic stimulation on the heart rate [28]. Cardiac output and stroke volume were not affected by SYMP in both sexes. These findings agree with those of previous research showing that cardiac index (cardiac output normalized to body surface area) was unchanged during CPT although TPR increased [18].

Interaction between vasoconstriction and vasodilation

The precise regulation of VC is essential to regulate BF towards tissues [11]. VC rapidly increases upon release of circulatory occlusion to allow fast blood supply towards the ischemic area. Rapid vasodilation is due to the release of local vasodilator agents produced by the vascular endothelium or muscle itself that quickly relax the vascular smooth muscle [29]. Our data show that the percent increments from baseline of peak (Fig. 1A) and average forearm VC (Fig. 1B) after cuff release were similar between sexes at rest. Brachial artery FMD was also similar between men and women after normalization to baseline brachial artery diameter and shear rate (Fig. 2B–D). Therefore, when baseline values are accounted for, similar forearm VC increments and brachial artery FMDs after cuff release in men compared to women may suggest similar endothelial-mediated vasodilation between sexes. Although women may have a blunted sympathetic vasoconstriction compared to men in response to CPT-induced SYMP, as evinced by the blunted TPR increase in women, the percent increase from baseline of forearm VC after cuff release was similar between sexes during SYMP. Thus, SYMP blunted the normal VC increments (Fig. 3A, B) after cuff release similarly between sexes. These findings suggest that, when comparisons are performed on data normalized to preceding baseline values, there are no overt sex differences in the dynamic regulation of forearm VC assessed through the interaction between endothelial-mediated vasodilation and sympathetic vasoconstriction. SYMP blunted the peak and average forearm VC increase upon cuff release in both sexes. No study has specifically investigated whether SYMP restrains the normal increase in forearm VC; however, SYMP-mediated restriction of vasodilation is consistent with the physiological assumptions. Norepinephrine released from sympathetic nerve endings and adrenal glands during SYMP should oppose the normal nitric oxide-mediated vascular smooth muscle relaxation by binding to post-synaptic α-adrenergic receptors [30].

The percent increments from baseline of peak (Fig. 1C) and average (Fig. 1D) brachial artery BF after cuff release were similar between sexes at rest and during SYMP. Thus, SYMP changed the normal BF responses (Fig. 3C, D) after cuff release similarly between sexes. These results suggest that, when different baseline values of BF between sexes are accounted for, there are no overt sex differences in the dynamic regulation of brachial artery BF towards an ischemic area regardless of a stressful situation. SYMP augmented the percent increase from baseline of peak brachial artery BF in both sexes. This is probably due to the higher limb perfusion pressure (MAP) during SYMP which overpowers the effects of any restrained vasodilation [11]. When comparing changes in absolute values of BF, without taking into account different baseline values between sexes, results may be misleading. Absolute values of peak BF during SYMP compared to at rest resulted to be statistically augmented in men but not in women. This finding may provide further insight into the study by Lind et al. [18], where brachial artery BF immediately after cuff release increased without reaching statistical significance during CPT as compared to without sympathetic stress in a group composed of 10 young men and 8 young women. A blunted change in the absolute peak BF in response to SYMP in women might be responsible for the failure to achieve statistical significance in the previous study. SYMP did not change the percent increment from baseline of the average brachial artery BF over the 60 s after cuff deflation. This suggests that acute levels of sympathetic activation do not impair the normal capacity to provide blood towards an ischemic tissue despite the presence of a blunted forearm vasodilation in both sexes, probably due to a weighted increase of MAP [11].