Association of a Modified Blumgart Anastomosis With the Incidence of Pancreatic Fistula and Operation Time After Laparoscopic Pancreatoduodenectomy: A Cohort Study 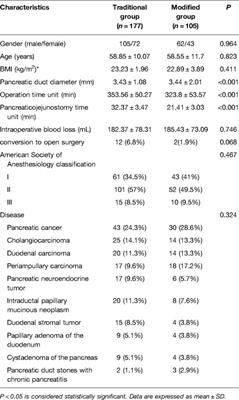 Laparoscopic pancreaticoduodenectomy has undergone gradual developments in recent years, owing to improvements in surgical instruments, the surgical skills and expertise of surgeons, and perioperative management. Pancreaticoduodenectomy (PD) is a challenging but standard surgical method that is used to treat benign and malignant diseases at the pancreatic head and ampulla (1, 2). However, the postoperative complications and mortality rate associated with PD are high due to its wide range of surgical resections, complicated processes, and considerable trauma (1, 2). With improvements in surgical techniques and perioperative management, the mortality rate of PD has decreased. However, the incidence of postoperative complications remains as high as 30%–50% (2, 3), especially that of postoperative pancreatic fistula(POPF), which is at 5%–40% (3). POPF is one of the most serious complications of PD. It is characterized by a leakage of pancreatic fluid as a result of damaged pancreatic ducts after surgery. It can cause life-threatening complications, such as ascites and pancreatic fluid-induced corrosion of peripheral blood vessels, surgical wounds and related abdominal bleeding, abdominal infection, and abdominal abscess. Treating these conditions can result in a prolonged hospitalization, increased medical expenses, and even hospital death in serious cases (4, 5).

This was a retrospective cohort study. Patients diagnosed with pancreatic tumors, ampulla of Vater tumors, bile duct tumors, and pancreatic duct stones were analyzed by imaging examination at the Department of Hepatobiliary Surgery of the Second Affiliated Hospital of Army Medical University from January 2015 to March 2021.

The inclusion criteria were as follows: (1) pancreatic head or periampullary tumor clearly diagnosed without signs of distant metastasis, based on preoperative imaging; (2) all patients underwent laparoscopic PD and possessed results of their pathological examination; (3) the tumor did not invade peripheral blood vessels, such as the portal vein and the superior mesenteric artery and vein, and did not require combined vascular and/or organ resection; (4) no serious multiple organ dysfunction of the heart, lungs, kidneys, and brain; and (5) all studies were performed by the same professional group.

The exclusion criteria were as follows: (1) patients who underwent pancreaticojejunostomy using the invaginated method; (2) patients with poor compliance and difficulty in strictly following the doctor’s advice; (3) patients with severe chronic diseases and an inability to tolerate surgery; (4) pancreatic tumors invading important blood vessels or distant metastasis; and (5) patients who discontinued treatment after surgery or did not regularly follow-up, resulting in incomplete perioperative data.

This retrospective study was conducted in accordance with the Helsinki Declaration and International Ethical Guidelines for Biomedical Research Involving Humans. The study was approved by the Medical Ethics Committee of the Second Affiliated Hospital of PLA Military Medical University (Supplementary Data Sheet 1). Informed consent was waived.

The primary outcome was to explore the association between the modified Blumgart anastomosis technique and operative time. The secondary outcome was to compare the incidence of complications between different surgical methods.

After the operation, one abdominal drainage tube was placed above the pancreatic duct-jejunal anastomosis and below the bile duct-jejunal anastomosis, respectively. The color and volume of the drainage fluid from the drainage tube were recorded every day after the operation, and drainage fluid amylase was checked on the 3rd and 5th postoperative day. If the amount of drainage amylase is less than 3 times the normal value and there is no ascites in the abdominal ultrasonography, the abdominal drainage tube will be removed. Routine gastrointestinal decompression and blood glucose monitoring were performed after the operation. When the patient felt hungry, the gastric tube was removed, water was given, and the patient was gradually transitioned to a normal diet according to the recovery of gastrointestinal function. All patients were given treatment including preventability anti-infection, parenteral nutrition, PPI, somatostatin injection et al.

Common complications after laparoscopic PD include POPF, delayed gastric emptying, anastomotic hemorrhage, abdominal infection, bile leakage, venous thrombosis (portal, mesenteric, and splenic veins), chylous leakage, ascites, stress ulcer, and incision complications (11–13). The definition of pancreatic fistula according to the International Study Group on Pancreatic Fistula (12) is as follows: the amylase content in the peritoneal drainage fluid is more than three times that in serum on or after the third day following surgery (13). Delayed gastric emptying was defined as gastric stasis requiring nasogastric intubation for more than 7 days or reinsertion of a nasogastric tube after the failure of postoperative feeding. Delayed gastric emptying was diagnosed if one of the following conditions occurred after upper gastrointestinal radiography or gastroscopy, excluding mechanical factors such as anastomotic obstruction: (1) the gastric tube needed to be indwelled for >3 days after surgery; (2) after extubation, the gastric tube needed to be placed again due to vomiting and other reasons; and (3) the patient was unable to eat solid food until 7 days after surgery. For surgical site infection, the diagnostic criteria followed the definition by the National Nosocomial Infection Surveillance System of the US Centers for Disease Control and Prevention (14). The classification of recent postoperative complications followed the Clavien–Dindo classification system of 2004 (15).

SPSS 26.0 (SPSS Inc., IBM, Armonk, NY, USA) statistical software was used for data analysis in this study. The data are expressed as the mean ± standard deviation. The independent sample t test was used for comparisons between the two groups. The counting data were expressed by the incidence rate, and comparisons between the two groups were performed using the χ2 test. Multiple linear regression was used to analyze the factors influencing the operation time. A P value of <0.05 was considered to be statistically significant.

A total of 282 patients were enrolled in this study. The patients were divided into two groups according to the type of pancreaticojejunostomy. There were 177 patients in the traditional surgery group and 105 patients in the modified surgery group. The baseline characteristics of the enrolled patients are listed in Table 1. There were no statistically significant differences between the two groups in terms of sex, age, body mass index, American Society of Anesthesiology classification, or disease (P > 0.05).

The postoperative complications are listed in Table 2. When comparing the incidence of postoperative complications between the two groups, no statistically significant differences were observed in the Clavien–Dindo classification, reoperation, bleeding, bile leakage, chylous leakage, pulmonary infection, abdominal infection, delayed gastric emptying, or ascites. However, the incidence of POPF in the traditional surgery and modified groups was 45 cases (25.4%) and 11 cases (10.5%), respectively. These cases included 10 cases in the traditional surgery group and 4 case in the modified group with POPF grades B. There were 4 cases of grade C POPF in the traditional surgery group and none in the modified group, and this was significantly different between the two groups (P = 0.003). No deaths were recorded in either group. All patients were followed up for 3–9 months, and there was no readmission due to complications. The results of the linear regression analysis showed that the influence of the surgical method on operation time was statistically significant (P < 0.001) and that the surgical method was associated with operative time. The operation time of the modified group was significantly shorter than that of the reference group (95% CI, −73.074 to −23.941, β: −0.438, P < 0.001; Table 3).

In the first part, a 3-0 Prolene suture is used to continuously penetrate the entire thickness of the pancreas, followed by suturing the seromuscular layer of the jejunum. This technique has several advantages. It reduces the suturing steps, lowers the difficulty of surgical suturing, and shortens the operation time. Also, the same anastomotic sealing performance and low incidence of POPF are retained because the full thickness of the pancreas is penetrated. Furthermore, compared to an intermittent mattress suture, it preserves the blood supply of the anastomosis and has better advantages than the traditional Blumgart anastomosis.

In the second part, for anastomosis of the pancreatic duct and jejunum mucosa-to-mucosa, three 8-shaped stitches to the pancreatic duct mucosa-to-jejunal mucosa are used for equal division of the anastomotic stoma (one circle of the anastomotic stoma is 360 degrees). This is equivalent to suturing one 8-shaped stitch every 120 degrees (four stitches in the shape of an 8 can be made for a pancreatic duct >5 mm in diameter). Compared to the traditional intermittent suture method of mucosa-to-mucosa, this improvement has several advantages. The tension is more uniform, which reduces blood loss due to cutting of the tissue and providing better sealing of the anastomosis. In traditional intermittent suturing, there are differences in the knotting strength of each stitch. Thus, it is not easy to maintain uniform tension at each knot, which may lead to increased cutting of some tissues due to knotting. This may result in physical microleakage and pancreatic leakage after further expansion. Some knots are not tightly secured, resulting in physical leakage. Knotting after the 8-shaped anastomosis suture will disperse and transfer the tension to the two joints, as per mechanical principles. Thus, it reduces cutting and damage to the tissue to ensure the sealing performance of the anastomosis. An additional advantage is that compared to Blumgart intermittent anastomosis, the surgical difficulty and steps in this process are greatly reduced, especially with the use of a laparoscope. Intermittent mucosa-to-mucosa suturing is complicated and has high technical requirements. However, this method has more advantages with the 8-shaped sutures than the intermittent sutures by reducing the knotting time by half and avoiding suture clutter. In particular, laparoscopic anastomosis is simple and reduces the anastomosis time by 20% compared with laparotomy and 34% compared with laparoscopic anastomosis.

This anastomosis method is new and has been designed on the basis of a mechanical analysis and the biological characteristics of mechanical anastomosis. Moreover, its improvements and enhancements are based on its predecessors, having the characteristics of less physical leakage and better biological healing. In addition, it reduces the difficulty involved in pancreaticojejunostomy, especially laparoscopic pancreaticojejunostomy, and markedly shortens the operation time. Therefore, it has good popularization value and technical predictability. This method of anastomosis mitigates the incidence of bleeding and POPF of the branching small pancreatic duct. Even if POPF occurs, the maximum range of the leakage is less than 1/3. Thus, it can be conservatively treated and rapidly healed. We used a modified Blumgart anastomosis in our study and observed no complications, such as bleeding or death. The incidence of POPF was reduced, the surgical difficulty was decreased, and the operation time was decreased from 25–40 min to 15–30 min.

Despite our promising findings, our study has some limitations. This is a retrospective study. Therefore, it lacks foresight and randomness and may have biases. Our operations were performed by doctors in the same surgical group. It is impossible to ensure that other doctors with the same experience perform the same surgical techniques. The surgeons improved their technique through repetition after performing more than 200 operations.

This modified Blumgart anastomosis is a reliable, fast, simple, and easy-to-learn procedure with a low risk of POPF, and it was found to be associated with reduced operation time.

The original contributions presented in the study are included in the article/Supplementary Material, further inquiries can be directed to the corresponding author/s.

The studies involving human participants were reviewed and approved by Medical Ethics Committee of Second Affiliated Hospital of PLA Military Medical University (2018-r045-01). Written informed consent for participation was not required for this study in accordance with the national legislation and the institutional requirements.

We sincerely thank ZL for his assistance and contribution in completing this work.

The Supplementary Material for this article can be found online at: https://www.frontiersin.org/articles/10.3389/fsurg.2022.931109/full#supplementary-material.